NASA has released its first full plan for its Artemis missions, which aim to put the first woman on the moon and the first man since 1972.

The plan calls for a lunar landing in 2024, but before that, NASA intends to launch two other missions to the moon to test its new Orion spacecraft.

"Our plan to land the first woman and next man on the moon in 2024 is on track!" Kathy Lueders, chief of NASA's Human Exploration and Operations Mission Directorate, tweeted on Monday.

The plan is ambitious, however a reality NASA Administrator Jim Bridenstine knows well.

"2024 is an aggressive timeline," he told reporters during a briefing on Monday. "Is it possible? Yes. Does everything have to go right? Yes."

So far, the agency isn't even sure that it will get enough money to pull off the plan. NASA is asking Congress for nearly US$28 billion.

And even if funding does come through and NASA does land astronauts on the moon within four years, the agency's goals get even more challenging after that. NASA hopes to subsequently put people on the lunar surface at least once a year from 2024 on and build a permanent lunar outpost by the early 2030s. The agency also hopes to construct and install the Gateway, a space station that would orbit the moon and support frequent trips to the surface.

That infrastructure might in turn enable trips to Mars after 2030.

Here are the latest details on the planned Artemis missions. 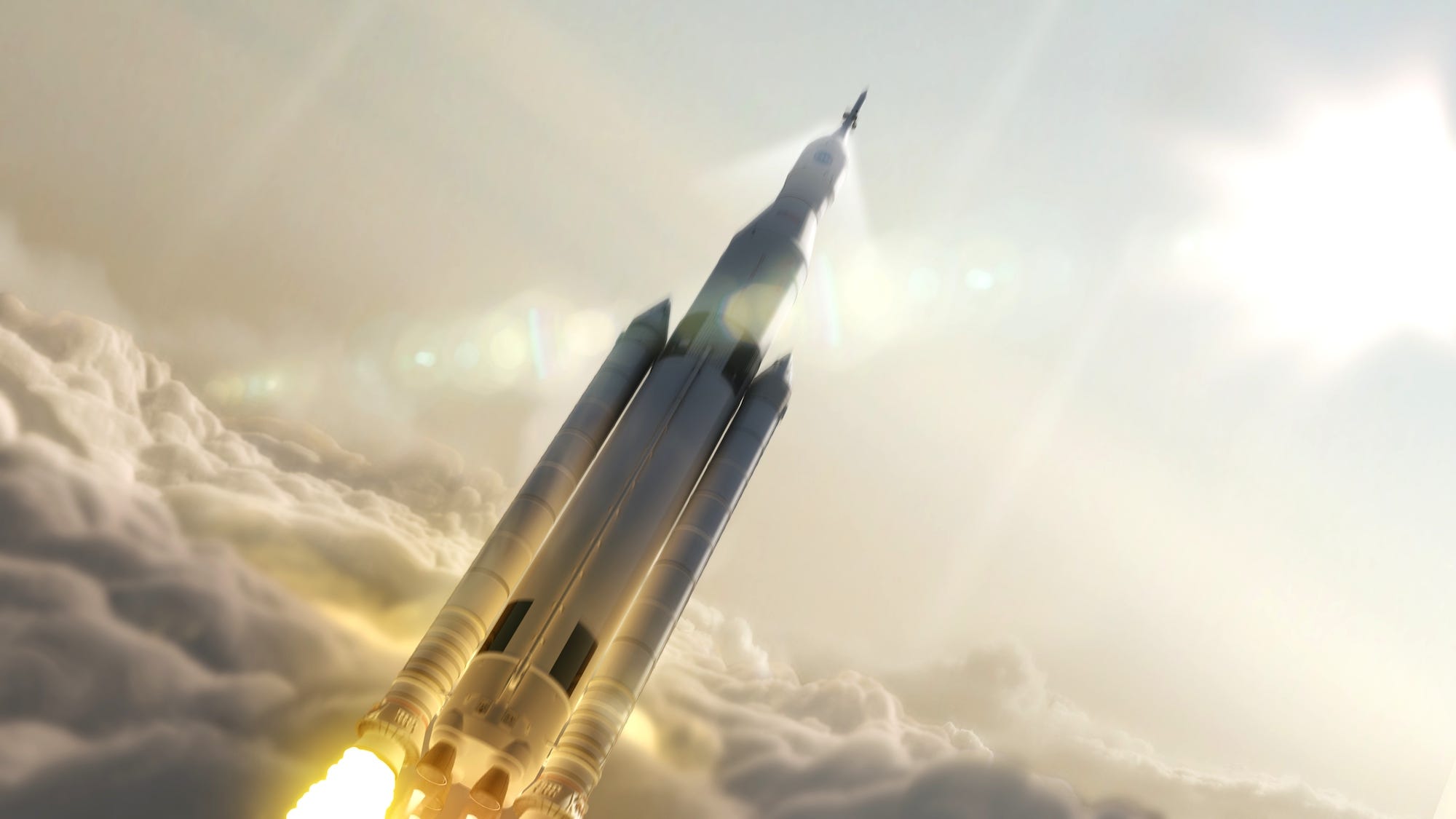 The first mission in the Artemis program, Artemis 1, calls for the launch of an Orion space capsule atop NASA's forthcoming mega-rocket, the Space Launch System. The spacecraft wouldn't carry any passengers, but would stay in the moon's orbit for three days as a test of its ability to fly to the moon and back.

NASA's timeline suggests that mission would launch in November 2021.

After that, Artemis 2 would be the first crewed test of Orion and the SLS rocket. In a lunar flyby, the Orion capsule would carry four astronauts around the moon's far side, which is almost a quarter of a million miles from Earth. That crew would go farther into deep space than any humans before them.

Once Orion gets that far away, gravity from the moon and Earth would slingshot the spacecraft back home. The entire mission is expected take about 10 days, serving as a test of Orion's capacity to ferry humans safely to and from the moon.

The mission is currently slated to launch in August 2023. Artemis 3 would land astronauts on the moon's South Pole

For the Artemis 3 mission in 2024, NASA would launch an Orion spacecraft, fly it into lunar orbit, land astronauts on the lunar surface, then safely return everyone to Earth.

The mission is expected to send people to the moon's South Pole (despite recent rumours suggesting the missions might land at a site previously visited by Apollo astronauts). Landing at the South Pole is more technically difficult than landing at other sites; no human or robotic mission has ever pulled off the feat.

To accomplish this goal, NASA needs a human landing system: a spacecraft to take astronauts from orbit to the moon's surface. The Artemis plan calls for the system to provide life support for about a week once the astronauts have landed, then get them back to lunar orbit.

The agency is already working with three commercial space companies â€" Blue Origin, Dynetics, and SpaceX â€" to develop prototypes for this system.

New spacesuits are in in the works, too. While they look fairly similar to the ones the Apollo astronauts wore (and they still contain diapers), the suits are more flexible, which should make it easier for astronauts to do complex tasks on spacewalks. The designs also include better in-helmet communications systems and other technological upgrades.

NASA is betting that the moon's South Pole will offer the most value to human travellers, since it likely contains lots of frozen water hidden in the bottoms of craters never touched by sunlight. Astronauts (or robots) could ostensibly mine that ice, melt it, store it, and use electricity to split the water into liquid oxygen and hydrogen a key oxidizer and fuel, respectively, for many types of rockets.

NASA scientists hope that fuel mined and produced on the moon could then be used for trips back home or deeper into space.

Harvesting such resources on the moon, Bridenstine said, would allow space explorers to start "living off the land." 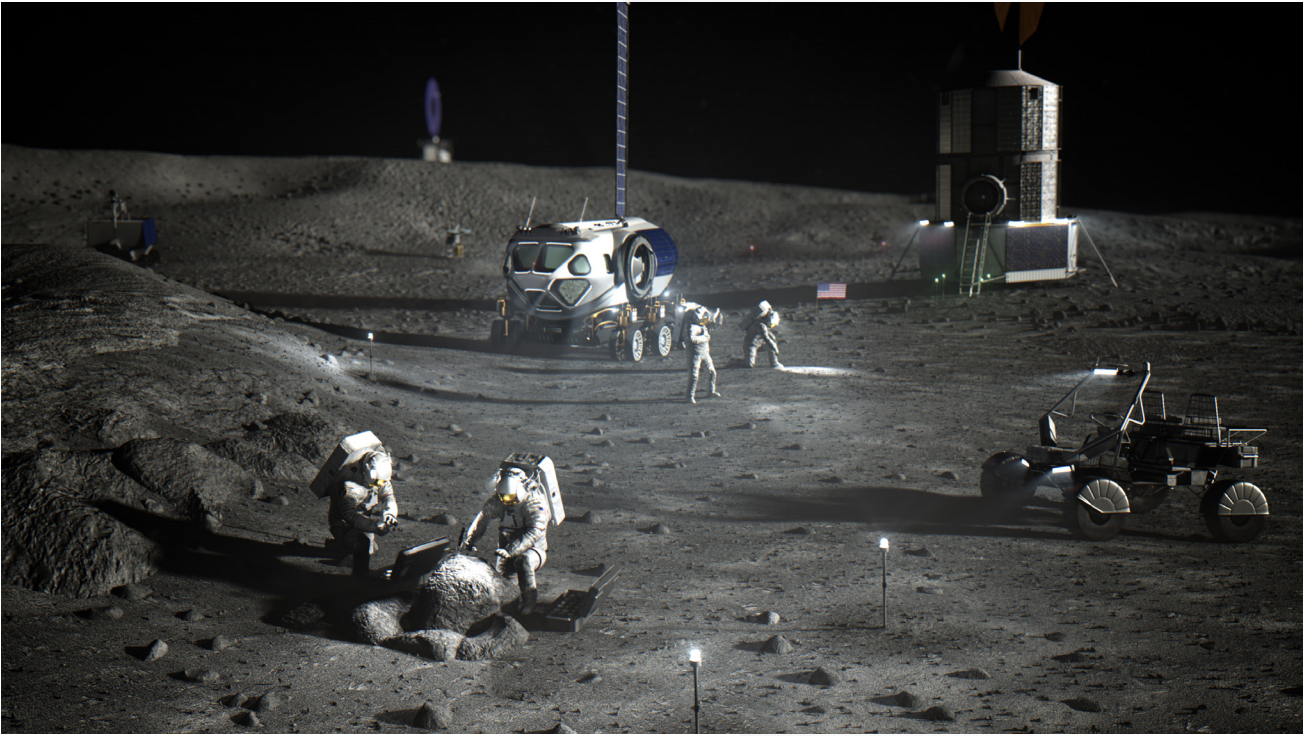 Artist's concept of the Artemis Base Camp. (NASA)

After its first mission, NASA hopes to put humans on the moon every year

Artemis 3 is only the beginning of NASA's ambitions. After that, the agency hopes to install the Gateway, an orbiting station similar to the International Space Station, in the moon's orbit.

Like the ISS, the Gateway is expected to be an international effort: Many other space agencies have agreed to help build it, including the Russia's Roscomos, the Japan Aerospace Exploration Agency, and the Canadian Space Agency.

These agencies are also on board to collaborate on a lunar base camp at the moon's South Pole that could house four people. The base would be equipped with two lunar-terrain vehicles, one of which could enable long, exploratory drives away from the camp.

But the budget still hasn't been worked out

Most immediately, NASA says it needs US$3.2 billion in funding to develop a human landing system. So far, the agency has spent about US$1 billion on that effort.

The rest of the funds are far from a sure bet, however. NASA is pinning its hopes on an omnibus appropriations bill at the end of the year, but the House of Representatives has so far only approved about US$630 million in additional funds.

Bridenstine said on Monday that he hopes to get a new budget in place to fund Artemis after the November election.

"If we can have that done before Christmas, we're still on track for a 2024 moon landing," he said.

Bridenstine is expected to appear before a Senate subcommittee on Wednesday to explain NASA's budget request, which has come about six months earlier than usual, Space News reported.

Without full funding from Congress, Bridenstine said, the agency would not get to the moon in 2024, though it may still try to get there "at the earliest possible opportunity."

Commercial enterprises like SpaceX could also potentially travel to the moon on their own dime, he added.

"The companies themselves could step up to the plate in a bigger way," Bridenstine said. "If the money doesn't materialise, could they do it with their own resources? I'll leave it to them to make their own determination."

More from Business Insider:
Trending News
Skipping Meals Could Be Much Worse For You Than We Realized Health3 days ago
NASA Just Discovered a Rare Earth-Sized Planet in a Habitable Zone Space3 days ago
Fathers Have Been Older Than Mothers For 250,000 Years, Study Finds Humans4 days ago