New Discovery Proves Fungi Were Around Way Earlier Than Anyone Expected

Mysterious fossils that had been sitting idle for decades in a Belgian museum have just been identified, and they're something wonderful. According to new analysis, these are fungal structures dating between 715 and 810 million years ago - making them some of the earliest fungus specimens ever recorded.

And, with the discovery, the history of the emergence of complex life on our planet has just become a little bit clearer.

One of the big questions about the evolution of life on Earth is when exactly did multicellular life emerge from the soggy depths of the primordial ocean and start establishing itself on land. It was previously thought this occurred in the Palaeozoic Era, which started around 541 million years ago.

Last year, however, a discovery indicated otherwise. An international team of scientists led by Corentin Loron of the University of Liège in Belgium identified fossils of fungus from Canada, dating back to between 900 million and 1 billion years ago - early in the Neoproterozoic Era. They called the fungus Ourasphaira giraldae.

Now, with a new and more comprehensive array of tests, fossils collected from the Democratic Republic of the Congo many years ago have delivered the surprise discovery of fungus fossils that could be nearly as old. The new fungus has yet to be given a species name.

"This is a major discovery, and one that prompts us to reconsider our timeline of the evolution of organisms on Earth," said geologist Steeve Bonneville of the Université libre de Bruxelles in Belgium.

As we have previously reported, we know fungus was around when the first plants began to emerge around 500-600 million years ago. However, the fungal molecular clock had already suggested these life forms should have been around sooner.

This clock is the mutation rate of biomolecules in DNA, which can be used to determine the evolutionary history of an organism. In the case of fungus, if it had emerged around the same time as plants, its molecular clock would reflect this.

Instead, the DNA of fungus indicated that it made its first appearance over 1 billion years ago. This discrepancy between the fossil record and the molecular clock has been a huge puzzle.

O. giraldae went a long way towards resolving the gap between the fungus fossil record and DNA record. The work of Bonneville and his team provides an even more robust filling in for that gap, supporting the discovery of O. giraldae.

"What is lovely about [this new] paper is that it supports the previous findings [from] 2019 that remnant fossils of fungi are preserved in rocks dating back almost to 1 billion years ago," geologist Martin Van Kranendonk of the University of New South Wales, who was not associated with either paper, told ScienceAlert.

"Both studies provided compelling evidence for their remains, but the Bonneville et al. paper sets a very robust framework for understanding fossil preservation in ancient rocks and how we can be certain of what comes out of them.

"These discoveries have tremendous implications for finding even possibly older fossil remains of complex life." 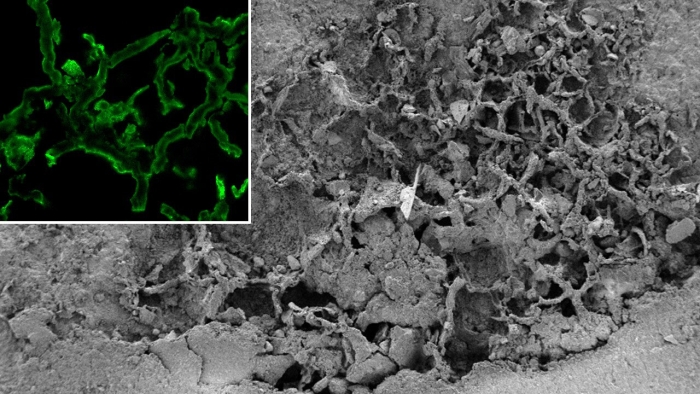 Five areas of fossilised fungus mycelium - interconnected filaments that make up the vegetative part of a fungal colony - were found in thin sections of the core sample.

What the researchers were looking for was evidence of organic material - and they found it. The mycelium strands contained evidence of chitin, a compound found in fungal cell walls. Fungus is not the only life form that produces chitin, but it is the only one with the filamentous structure of mycelium.

The tests also showed that the mycelium had partially kerogenised, an advanced stage of the fossilisation process - ruling out any contamination in the form of new or recent fungal growth on the core sample.

And the new research backs up previous findings of the symbiotic relationship between fungi and the first plants. That's because the sample was collected from the edge of what was once wetland, such as a lake or lagoon.

"The presence of fungi in this transitional area between water and land leads us to believe that these microscopic mushrooms were important partners of the first plants that colonised the Earth's surface around 500 million years ago," Bonneville said.

The next step will be to look for and apply the team's methods to even older fungus fossils, filling in the gaps in the fossil record and completing the timeline for the emergence of terrestrial multicellular life.

"Why is this exciting? Because it teaches us about our own origins," Van Kranendonk told ScienceAlert.

"Believe it or not, but fungi are our ancestors, so understanding how they arose on Earth, under what conditions, tells us about how intelligent life arose on our planet, how long it took, and what that might mean for exploring for intelligent life outside of Earth's confines."