New Horizons Is So Far From Earth, It Shows Us How Stars Look Different Out There

In July 2015, the New Horizons spacecraft made history when it became the first robotic explorer to conduct a flyby of Pluto. This was followed by another first, when the NASA mission conducted the first flyby of a Kuiper Belt Object (KBO) on 31 December 2018 – which has since been named Arrokoth.

Now, on the edge of the Solar System, New Horizons is still yielding some groundbreaking views of the cosmos.

For example, we here on Earth are used to thinking that the positions of the stars are "fixed". In a sense, they are, since their positions and motions are relatively uniform when seen from our perspective.

But a recent experiment conducted by the New Horizons team shows how familiar stars like Proxima Centauri and Wolf 359 (two of the closest stars in our neighbors) look different when viewed from the edge of the Solar System.

Located in the constellation Leo, Wolf 359 is an M-type (red dwarf) star that is roughly 7.9 light-years from Earth. It can be found close to the same path the Sun follows through the sky (the ecliptic), but can only be seen with a telescope.

And if you're a Trekkie, you might recognize the name since it was where that major battle with the Borg took place (don't act like you don't know!) 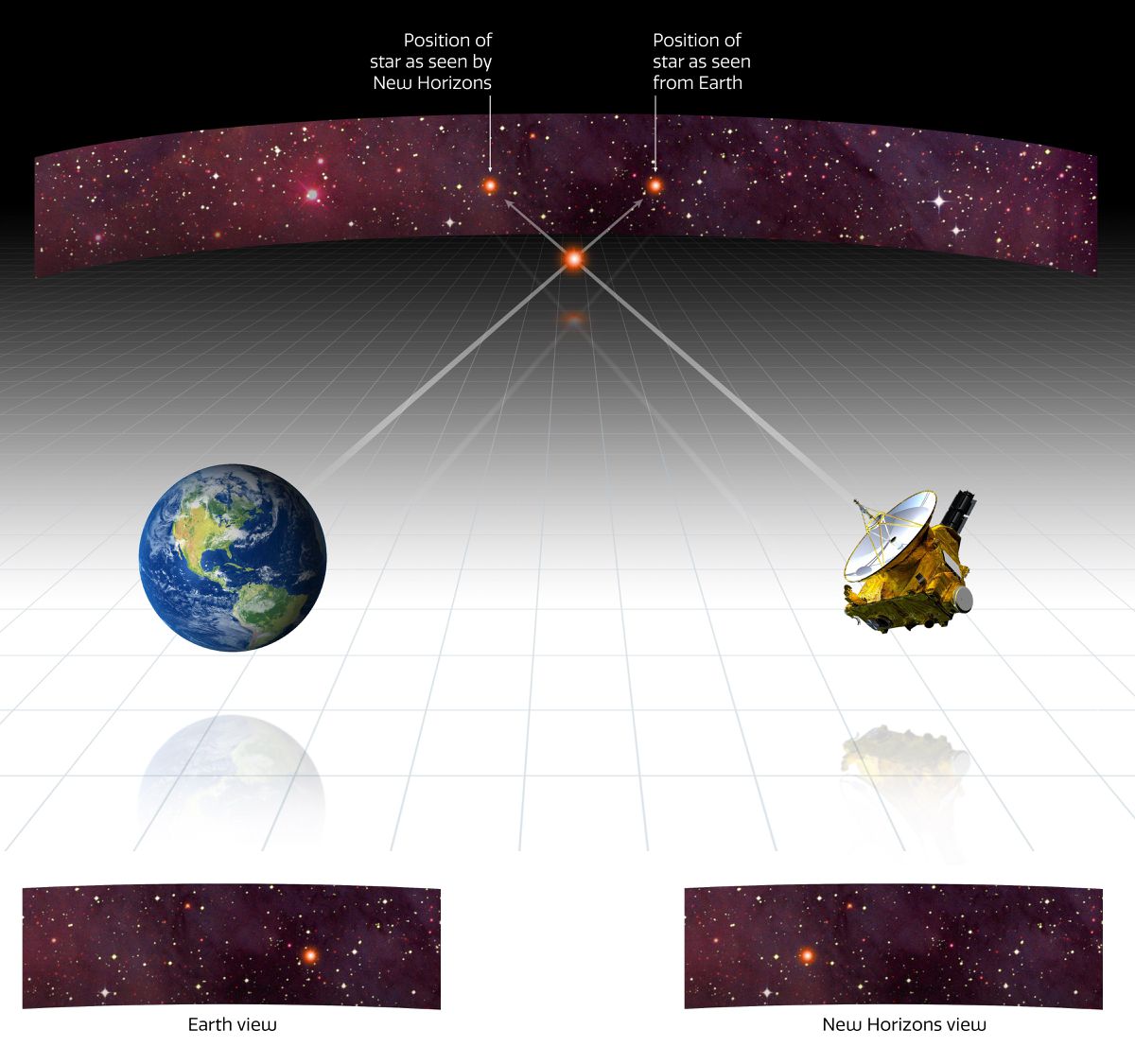 Proxima Centauri, on the other hand, probably needs no introduction. But for those who are unfamiliar, this red dwarf star is part of the Alpha Centauri triple star system and the closest star to our Sun (located 4.24 light-years away).

It is here that the closest planet beyond the Solar System (and the closest potentially habitable planet to boot!) was discovered in 2016, a rocky (aka Earth-like) world known as Proxima b.

Alongside Barnard's Star and a handful of brown dwarfs, these two star systems are our closest stellar neighbors. When New Horizons took images of these stars at a distance of roughly 7 billion km (4.3 billion miles; 46.76 AU) from Earth, their positions looked rather different than what we are used to.

It is for this reason that the New Horizons team decided to use the opportunity to conduct parallax measurements.

This technique involves measuring the relative positions of stars from two different locations to detect any possible shift with respect to more distant objects. For almost two centuries, astronomers have used this technique to measure the distance to nearby stars.

Traditionally, astronomers have relied on Earth's own orbital motion to determine these distances. Since Earth's orbit is about 300 million km (186 million miles) in diameter, its vantage point changes considerably in the course of a year.

But with greater distances and Earth's orbit as a 'baseline', astronomers can conduct greater parallax measurements. Given its current distance from Earth, the New Horizons mission team and NASA have decided to do this very thing, and invited the public to participate.

Tod Lauer, an astronomer and researcher from the National Science Foundation's National Optical-Infrared Astronomy Research Laboratory (NOIRLab), is also a member of the New Horizons science team. As he told Universe Today via email:

"New Horizons is leaving behind the familiar skies of home. The pattern of stars it sees becoming more alien with each passing year. We will not do scientific parallaxes this way. The benefit for us is mainly in understanding how we see the Universe around us, and how with leaving the Earth the perspectives change."

As part of this parallax program, images of Proxima Centauri and Wolf 359 were taken on April 22nd and April 23rd (respectively) by the New Horizons spacecraft.

These were then combined with companion images of the two stars taken from Earth on the same days with the help of observatory staff and citizen astronomers. The result of all this was a record-setting parallax measurement that yielded 3D images of the stars.

The shift in Wolf's position when our perspective changes. (NASA/JHUAPL)

"The professional and amateur astronomy communities had been waiting to try this, and were very excited to make a little space exploration history," said Lauer, in a recent JHUAPL statement. "The images collected on Earth when New Horizons was observing Proxima Centauri and Wolf 359 really exceeded my expectations."

In addition to the images shown above, which were recently released by The Johns Hopkins University Applied Physics Laboratory (JHUAPL), the full collection of images (including the 3D ones) is also available for download on the mission website. For those who don't have access to 3D glasses, the images are posed side-by-side for stereo and cross-eyed stereo viewing. Just follow the directions to see the effect.

To create the 3D images, Dr. Lauer was joined by John Spencer – the Deputy Project Scientist for the New Horizons' mission from the SwRI – and science team collaborator Brian May.

Fans of the legendary rock band Queen ought to instantly recognize this name, given that he was the band's lead guitarist. However, May is also an astrophysicist and stereo imaging enthusiast, so his talents played a big role in this experiment. As he explained:

"It could be argued that in astro-stereoscopy – 3D images of astronomical objects – NASA's New Horizons team already leads the field, having delivered astounding stereoscopic images of both Pluto and the remote Kuiper Belt object Arrokoth.

But the latest New Horizons stereoscopic experiment breaks all records. These photographs of Proxima Centauri and Wolf 359 – stars that are well-known to amateur astronomers and science fiction aficionados alike – employ the largest distance between viewpoints ever achieved in 180 years of stereoscopy!"

Another impressive accomplishment to come from all this is the implications it has for stellar navigation. Throughout history, navigators have used measurements of the stars to establish their position on Earth.

Examples include ancient Polynesian sailors who guided their boats by the stars to settle all across the South Pacific. In more modern times, Arab and European sailors relied on astrolabes and sextants to chart their course.

In the near future, interstellar navigators could use the technique New Horizons just demonstrated to establish their position in the galaxy. Currently, spacecraft rely on NASA's Deep Space Network to provide radio tracking, which is far more accurate. Nevertheless, using the stars (particularly pulsars) to navigate through space could be the preferred method for exploring the galaxy in the future.

"It's fair to say that New Horizons is looking at an alien sky, unlike what we see from Earth. And that has allowed us to do something that had never been accomplished before – to see the nearest stars visibly displaced on the sky from the positions we see them on Earth."

Only a handful of missions in the history of space exploration have been farther, those being the Pioneer 10 and 11, and the Voyager 1 and 2 missions which are currently (or eventually will be) in interstellar space.

In time, they will be joined by New Horizons, which promises to reveal a great deal more about the cosmos and our Solar System in the meantime!