Sometimes you have to just sit back and marvel at a particularly gorgeous view of a galaxy interaction.

When these giant space cities merge with each other, wild and crazy things happen – a sort of "Galaxies Gone Wild" scenario. Take this pair, for example. We see them locked together in a cosmic dance that has lasted for not quite a half-billion years.

With each turn on the intergalactic dance floor, they change each other permanently. Eventually, they'll combine to make one giant galaxy.

NGC 1512 (left) is the larger of the two galaxies. It's a barred spiral that looks like it's unwinding as the interaction plays out. Its smaller companion is a dwarf lenticular galaxy (to its lower right) called NGC 1510.

They both lie in the direction of the constellation Horologium and are about 60 million light-years away from us.

The Victor M. Blanco 4-meter telescope in Chile caught this view of the pair's galaxy interaction.

What Happens in a Galaxy Merger?

Galaxies lie far apart in space, but they interact with each other throughout cosmic time. The dances they do are how they grow and change. This includes our own Milky Way.

In fact, our galaxy is currently gobbling up some smaller dwarf galaxies, adding their distinctive stars to the larger population of the Milky Way.

The galaxy interaction of NGC 1510 and NGC 1512 is a good example of what happens during the merger process.

Their gravitational attraction to each other spurred great waves of star formation, particularly in the outer spiral arms of the larger galaxy. That created what astronomers call "starbursts" and splashed long blue strings of hot young stars out to space.

Galaxy mergers often spur bouts of star formation. Someday, these massive stars will explode as supernovae and add a bit of a fireworks display to the long galactic dance.

In addition, NGC 1512's smaller gravitational pull has pulled gas, dust, and stars away from its larger neighbor, creating wispy tendrils extending out through space. It also looks like it's "unwinding" the spiral arms on the more-massive neighbor.

NGC 1510 affects its small companion, pulling tendrils of gas and dust away. The interaction is also distorting the shapes of both galaxies. Things will only get worse for both of them as time goes by.

Ultimately, they'll merge completely with each other to form a giant galaxy, probably an elliptical one. But, that's way far in the future.

This galactic dance scene is part of a larger image captured by the Blanco Telescope, outfitted with the Dark Energy Camera (DECam). The DECam was built for use by the Dark Energy Survey. That's a project to map hundreds of millions of galaxies and detect supernovae.

Ultimately, the idea is to look for patterns in cosmic structure that give clues to the nature of dark energy. That's a mysterious "something" that is accelerating the expansion of the universe.

The survey lasted six years. During that time, the DECam recorded information about 300 million galaxies across 5,000 square degrees of the southern skies.

While we can't see dark energy directly, we can appreciate the survey's incredibly detailed images of galaxies like this one and the results of such a fantastic galaxy interaction.

If you look closely at this wide-field view, you can see even more distant galaxies forming a backdrop to the two interacting ones. 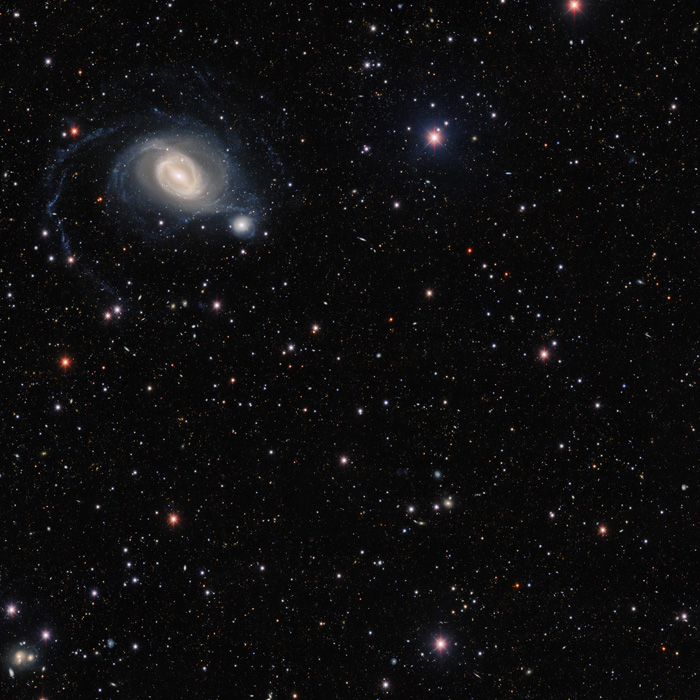 The Victor C. Blanco facility is part of the NOIRlab. This collection of observatories includes the Cerro Tololo Inter-American Observatory, the Community Science and Data Center, Gemini Observatory, Kitt Peak National Observatory, and the Vera C. Rubin Observatory. The lab itself is funded by the U.S. National Science Foundation.