A view of the rariphotic from the Curasub. (Substation Curaçao)

It's always been there, but a layer of the ocean is so distinct from the waters above and below it that it needed its own category.

Scientists have just defined the newly named rariphotic zone, a layer of ocean between depths of 130 and 300 metres (400 and 1,000 feet) - a low-light or "twilight zone" in deeper reef regions.

It sits just below the mesophotic zone, between 40 and 150 metres (131 and 492 feet), where medium light penetrates - the optimal waters for tropical coral reefs. And it's teeming with previously unknown fish - a whole newly discovered ecosystem.

These fish are closely related to reef fish, which researchers didn't think could live below the mesophotic.

This has led to a hypothesis that the new rariphotic zone may be a refuge for shallower reef fishes seeking respite from the warming waters and coral deterioration caused by climate change.

There's a lot we don't know about the ocean, simply because it's so difficult for us to access. It was only thanks to advances in submersible technology that marine scientists have been able to explore down below the reef off the coast of Curaçao.

Since 2011, researchers from the Smithsonian National Museum of Natural History (NMNH) and the Smithsonian Tropical Research Institute have been engaged in the Deep Reef Observation Project, taking a five-person submersible called the Curasub as deep as 309 metres for up to eight hours at a time.

There, so little light penetrates that there isn't enough to support the algal symbionts on which corals rely. So the discovery of reef-like fishes was something of a surprise - doubling their known depth range. 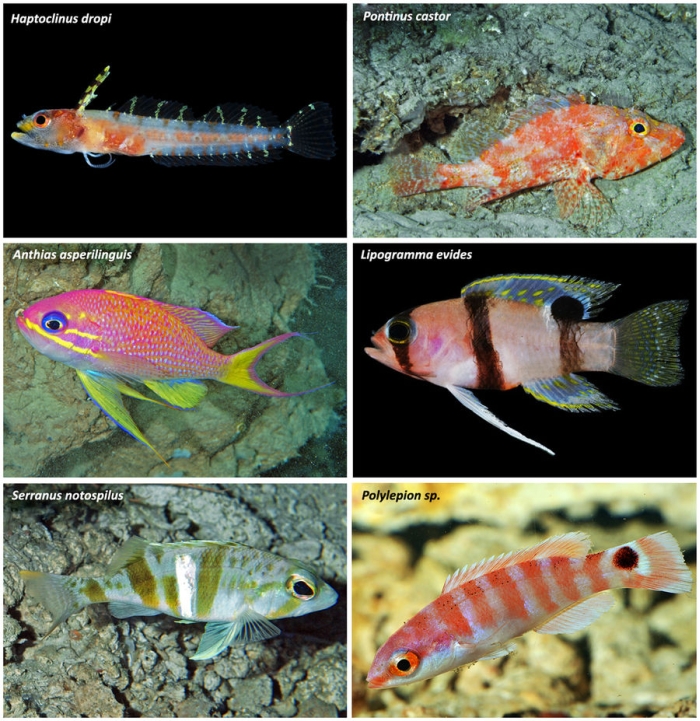 Some of the fish in the rariphotic zone near Curaçao. (Baldwin et al./Scientific Reports)

So far, the researchers have made observations of around 4,500 rariphotic fish, representing 71 different species. Most of them are closely related to fish swimming around in the reef above.

"About one in every five fish we're finding in the rariphotic of the Caribbean is a new species," said Ross Robertson, a marine biologist at STRI and co-author of a new study describing the zone and its inhabitants. "So far, my favorite is Haptoclinus dropi."

Many of the new finds are still awaiting an official analysis and description, but the paper isn't just about the inhabitants of the newly named zones. It challenges the previous belief that, after the mesophotic zone, the ecosystems immediately transition to those of the deep sea.

The rariphotic is a sort of "missing link" between medium-light reef zones and the lightless ocean beneath, known as the aphotic zone.

And the researchers have also proposed a new name for shallower waters higher than 40 metres (131 feet), where lots of light penetrates - the altiphotic.

The new categories therefore are as follows:

"It's estimated that 95 percent of the livable space on our planet is in the ocean, yet only a fraction of that space has been explored," said study lead author Carole Baldwin of the NMNH.

"That's understandable for areas that are thousands of miles offshore and miles deep. But tropical deep reefs are just below popular, highly studied shallow reefs - essentially our own backyards. And tropical deep reefs are not barren landscapes on the deep ocean floor: they are highly diverse ecosystems that warrant further study. We hope that by naming the deep-reef rariphotic zone, we'll draw attention to the need to continue to explore deep reefs."

The team's research has been published as open access in the journal Scientific Reports.