Not many people have entered the exclusion zone following the Fukushima nuclear disaster in Japan more than four years ago, but now a series of photos give us a fascinating glimpse into a world where all the people suddenly vanished.

Photographer Arkadiusz Podniesiński has previously done a lot of work at Chernobyl, and earlier this year he decided to take his camera to Japan to see the similarities and differences between the two disaster sites, their evacuation procedures, and the cleanup process. Let's just say the result was pretty eerie.

"When taking photographs of the interiors of the buildings the similarities to Chernobyl are even more striking, although in Chernobyl, after almost 30 years since the disaster and thousands of tourists visiting it, it is hard to find any untouched objects," writes Podniesiński on his website.

"In Fukushima, the disaster remains seared into the memories of residents, the evacuation order still in force, and the total lack of tourists mean that everything is in the same place as it was four years ago. Toys, electronic devices, musical instruments, and even money, have been left behind," he adds. 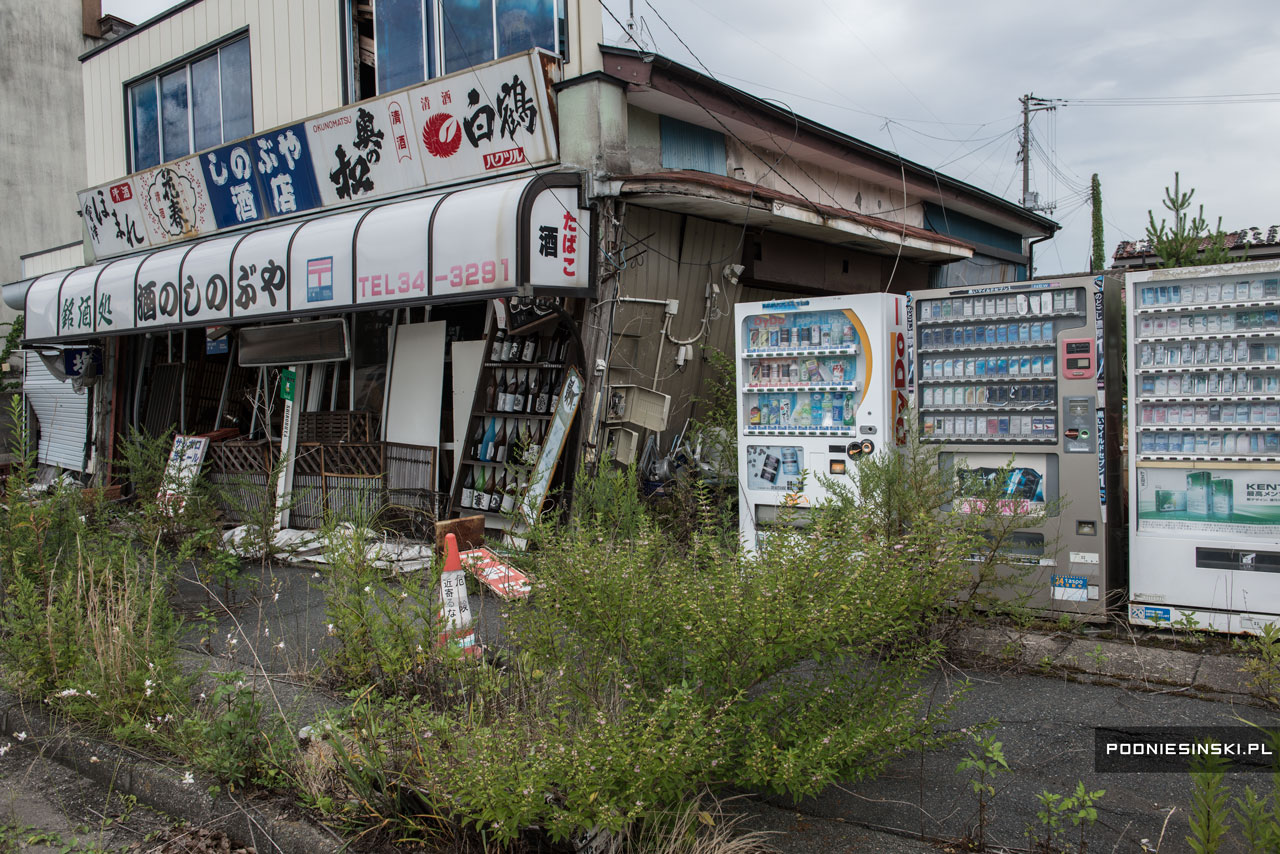 As of earlier this year, more than 120,000 people are still not able to return home following the nuclear meltdown. The area surrounding Fukushima is now divided into three zones: green, orange, and red. The extensive cleanup process is now mostly complete in the green zone and residents will soon be allowed to return home.

But inside the orange zone, residents can only visit for a few hours at a time and can't stay overnight, and the red zone is heavily policed and accessible with a permit only. Decontamination is no longer being carried out in the red area due to the high radiation levels, and residents will most likely never be able to return to their homes.

What's fascinating is that not everywhere in the red zone was affected by the tsunami and earthquake on 11 March 2011, so while some of Podniesiński's photos show structures with obvious flood and quake damage, they also show homes and stores that haven't been touched at all in four years. Some of the supermarkets even appear to be fully stocked. 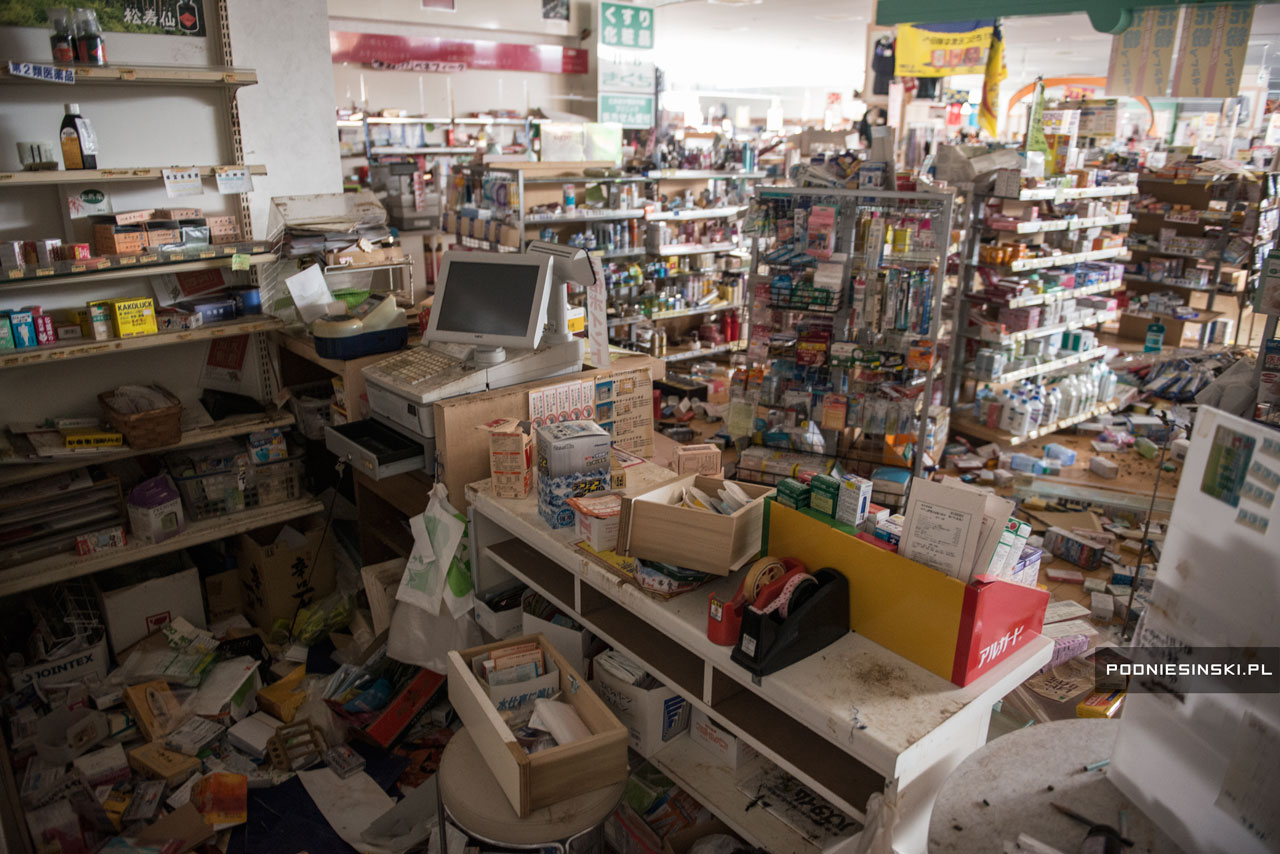 One of the local primary schools photographed in the series is just 300 metres from the coast, and every single clock in the facility is stopped at the exact time the tsunami hit and the power went out. Inside the orange zone, there are also some residents who have returned illegally. One farmer told Podniesiński that he'd come back before it was safe to tend to his animals. "He could not bear to see whole herds of cattle wandering aimlessly in the empty streets when their owners had fled the radiation," explains Podniesiński.

He also met a married couple who still visit their property once a month for a few hours - as often as they're allowed to - so they can check there are no leaks in the house and that stray animals haven't gotten in through the windows. 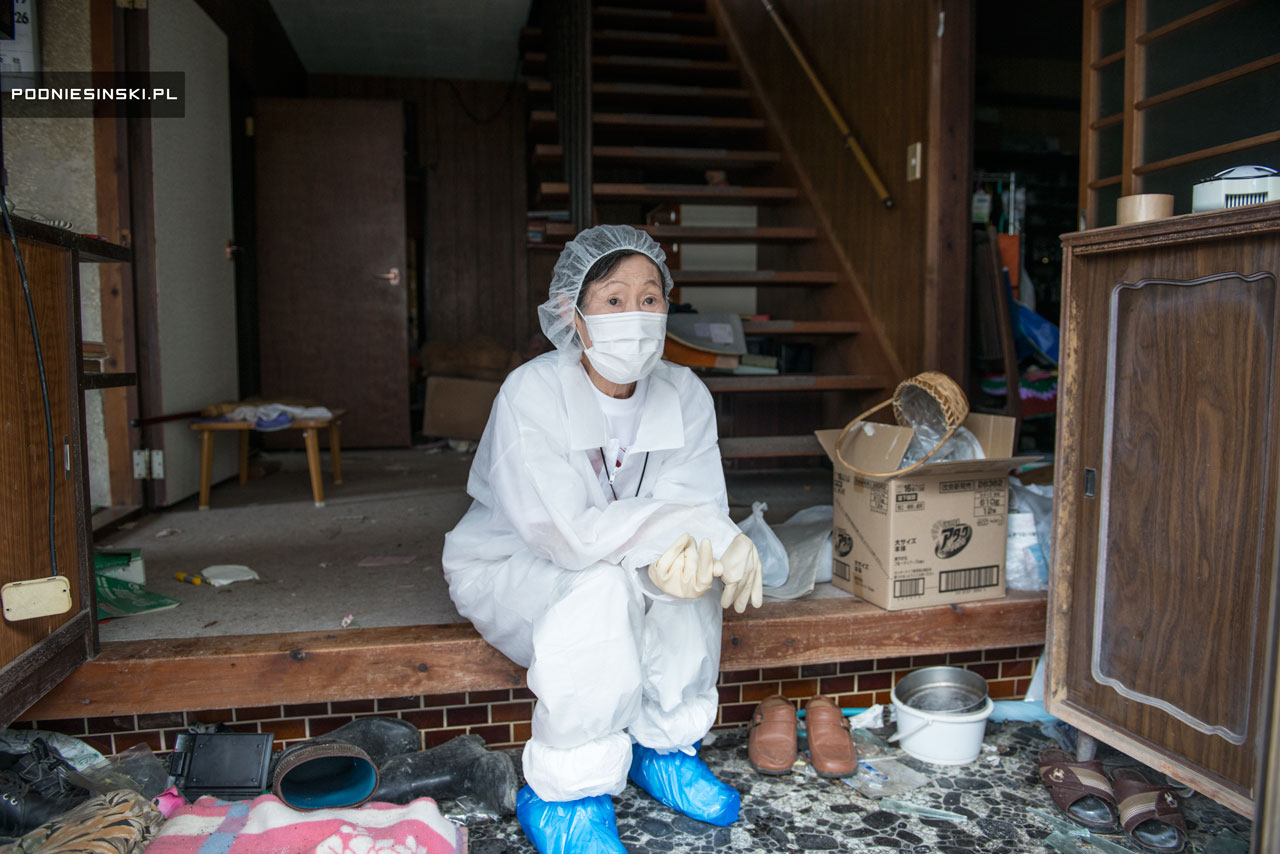 The problem is that no cleanup has been able to take place in the mountainous areas and places covered in thick forest. According to Podniesiński, only houses, the areas around them, and 10-metre strips along the roads are being decontaminated.

This has led to fears from scientists and residents that heavy rain will wash radioactive isotopes out of the mountains and forest areas, and contaminate inhabited land again.

"The same is true of fire, which, helped by the wind, can easily carry radioactive isotopes into the nearby towns," writes Podniesiński. "These fears are not without foundation, over the last year this has happened at least twice in Chernobyl."

On the way out of the red zone, he found a huge line-up of abandoned cars, almost obscured by trees. They were used to evacuate, but were left behind by their owners once they realised they were too contaminated to take out of the exclusion area. The photographer is pictured here below a sign that says "Nuclear energy is the energy of a bright future". "I came to Fukushima as a photographer and a filmmaker, trying above all to put together a story using pictures," Podniesiński writes writes. "I was convinced that seeing the effects of the disaster with my own eyes would mean I could assess the effects of the power station failure and understand the scale of the tragedy, especially the tragedy of the evacuated residents, in a better way."

See the full photo series over at Podniesiński's website, and find out more about his work. All images copyright Arkadiusz Podniesiński, published with permission.