A New Treatment Stops OCD in Mice in Minutes

Scientists have developed a new fast-acting treatment that can stop obsessive-compulsive disorder (OCD) behaviour in mice in a matter of minutes, which is a huge improvement on the weeks and months that these drugs normally take to have an effect.

The experiments so far have only been carried out on mice, but researchers think the same approach could work with people, meaning we could be closer to a treatment for OCD that's effective and almost instantaneous.

Around 1 percent of the adult population in the US experiences some form of OCD, and half of those cases are classed as severe, so a fast and effective treatment would be incredibly welcome. The anxiety disorder shows up through intrusive, persistent thoughts and repeated, compulsive actions that interfere with a person's normal day-to-day life.

To investigate what might be responsible for OCD-style behaviour in mice, researchers from Duke University in North Carolina zeroed in on a neuroreceptor called mGluR5, one of the proteins that helps control the brain's response to outside stimuli. Once the activity of mGluR5 was blocked, the OCD-like behaviour in the test mice cleared up very quickly.

"The reversibility of the symptoms was immediate – on a minute time frame," said senior investigator Nicole Calakos. Antidepressants used to tackle the same problems in mice were found to take weeks to have any effect, the same sort of timescale currently seen with human patients. 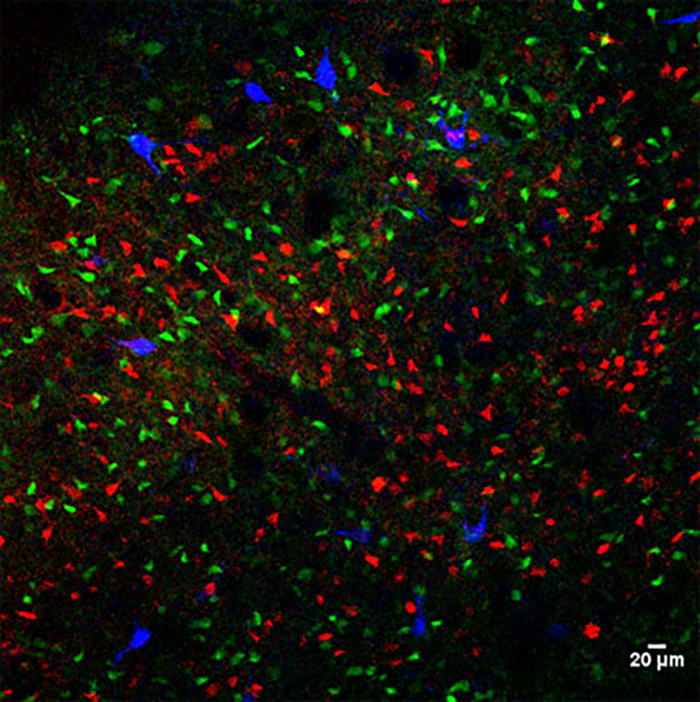 A balance of 'go' (red) and 'stop' (green) cells in the brains of tested mice. Credit: Kristen Ade/Duke University

The discovery of the role of mGluR5 builds on prior work from 2007 also carried out at Duke. Researchers previously found that deleting a gene that codes for a protein called Sapap3 – which helps brain cells communicate – was enough to cause mice to show signs associated with OCD, including excessive grooming and displays of anxiety.

Now, nine years later, scientists have found a way to reverse that effect. "These new findings are enormously hopeful for considering how to approach neurodevelopmental diseases and behavioural and thought disorders," said Calakos.

Sapap3 helps to organise connections between neurons, and without it mGluR5 isn't properly controlled. The scientists also tried a separate test where mGluR5 production was boosted in ordinary lab mice, and sure enough the same anxious behaviour started.

With the mGluR5 receptor always on – due to the absence of a functioning Sapap3 protein – certain neurons in the brain work overtime to give the 'green light' to repeated actions like face washing.

The next step is to see if mGluR5-blocking medications can work in people, and the good news is that similar drugs have previously been part of clinical trials to treat Parkinson's, which means the first steps have already been taken. Still, a lot more work needs to be done on identifying which compulsive disorders mGluR5 could be linked to in humans.

While a variety of psychotherapies and medications are available to try and keep OCD under control, there's nothing anywhere near as quick and painless as this new treatment might prove to be, so we can't wait to see where this research leads.

The findings are published in Biological Psychiatry.