Scientists have discovered a new type of 'hell ant' - a species with terrifying spiky mouthparts reinforced with metal and used for drinking the blood of its enemies.

Thankfully, these insects have been extinct for a while, but a 98-million-year-old amber specimen has now revealed stunning detail of the prehistoric species, including a curious metal component in its jaws.

The newly described Linguamyrmex vladi belongs to a group known as 'hell ants' or haidomyrmecines, an extinct bunch that lived in the Cretaceous period and characterised by strange, vertically moving mouthparts.

Hell ants aren't actually the ancestors of the tiny critters we see today, and instead belong to a stem-group which went extinct before the common ancestor of all modern ants appeared on the scene to start its lineage.

And given how scary some of those hell ant features sound, we're almost grateful that the worst we have to deal with these days are "just" bullet ants and fire ants.

For comparison, here are the mandibles of a typical modern ant: 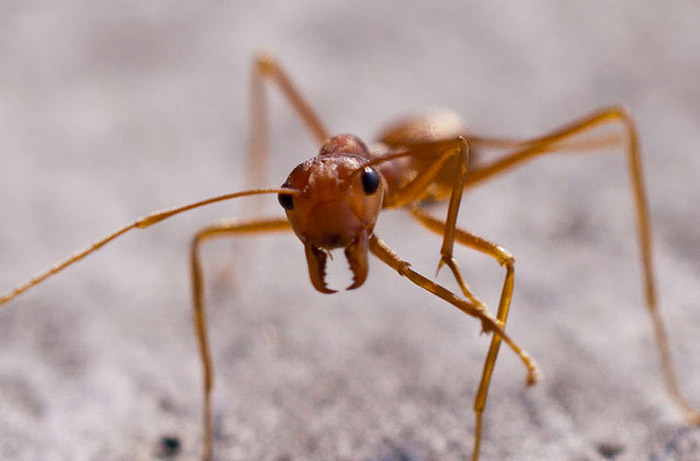 And here's a close-up of the jaws of this newly discovered hell ant: 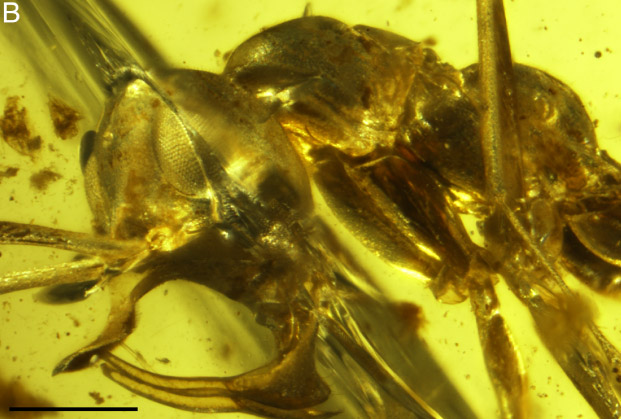 It appears that these spiky jaws were surrounded by trigger hairs which are similar to those used by trap-jaw ants today - the same ones that help an ant's jaws to snap shut at a horrifying speed.

This ant also had a reinforced horn-like appendage or 'paddle' on top of its jaws, and it's possible it used that to clamp down on its prey once it thrusted the upward-facing mandibles into the prey's body.

The researchers, led by Phillip Barden from New Jersey Institute of Technology, also discovered a tube-like channel between the mandibles, and think the ants probably sucked on their food rather than chewed it, since the weird jaws wouldn't really accommodate for chewing action.

"The mandibles and paddle of Linguamyrmex may have functioned to puncture soft-bodied prey and feed on the haemolymph," the team writes in the study.

Helpfully, the specimen was found in its ambery grave next to a large larva of a beetle, which would have been perfect soft-bodied prey for a liquid-sucking predator such as this one. 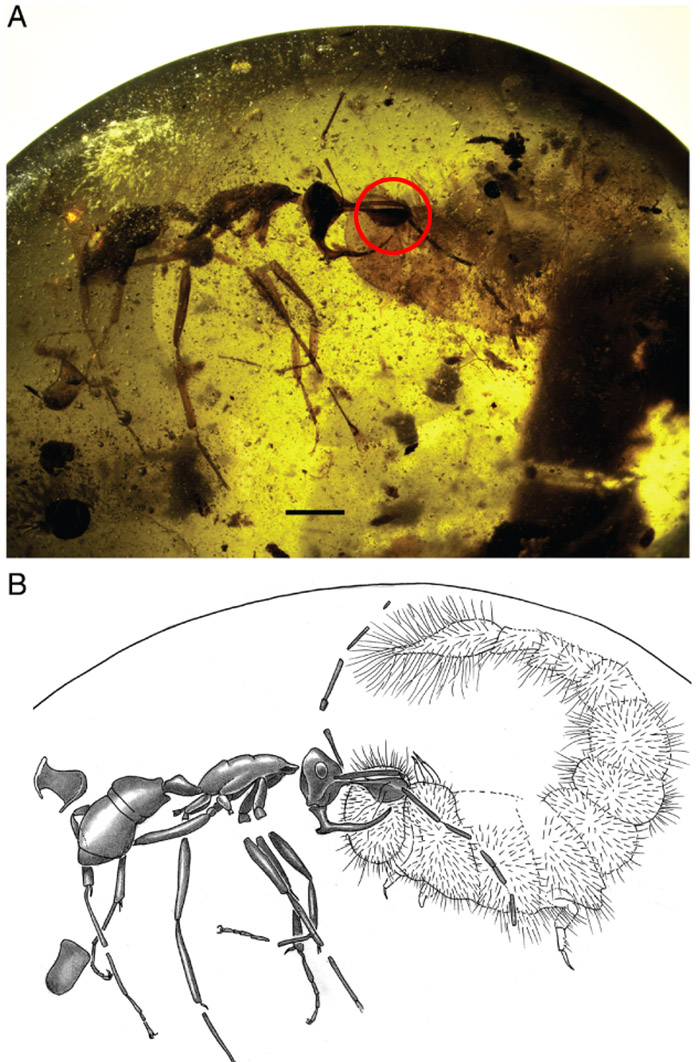 The diagram above shows the placement of the two specimens (the red circle shows the location of the paddle horn). The jaws of the ant weren't actually embedded in the larva, but the researchers note that its placement is "consistent with this being prey."

And if you haven't had enough of these gruesome details, here comes perhaps the weirdest part - an X-ray scan of the amber specimen revealed that the underside of that paddle horn on its head is reinforced with metal particles.

Now, the bug didn't actually fashion a little war helmet for itself - instead, it appears to have had the awesome ability to collect trace metals from its diet into parts of the body that needed reinforcement.

"Insects are known to sequester metals – in particular, calcium, manganese, zinc, and iron – in ovipositors and mandibles, to increase strength and reduce wear," the team writes in the study.

Having a metal-infused spike would have allowed the hell ant to withstand the wriggling of its prey if it missed a hit with its jaws, or perhaps made it easier to jam its spikes into the soft-bodied food, the researchers think.

"Until we find a specimen with the prey item trapped, which is probably a matter of time, we're left to speculate," Barden told Josh Gabbatiss at New Scientist.

As the amber specimen came from a rich excavation area in Myanmar, it might just be a matter of time until we find more horror spike bugs… er, hell ants.

The new species was described in Systematic Entomology.

Trending News
Skipping Meals Could Be Much Worse For You Than We Realized Health2 days ago
NASA Just Discovered a Rare Earth-Sized Planet in a Habitable Zone Space2 days ago
Fathers Have Been Older Than Mothers For 250,000 Years, Study Finds Humans3 days ago