BREAKING: Newly Discovered Planet Could Be The Best Hope For Life Outside Our Solar System

We live in a wondrous age where scientists don't exactly find it hard to make out exoplanets against the inky blackness of the night sky – but as for discovering worlds that might also support life, it's not always easy.

Which is why it's so exciting that researchers think they might have now uncovered a new best candidate to investigate for signs of life beyond our Solar System: it's called LHS 1140b, a distant world that's a little larger than Earth, located about 40 light-years away.

"This is the most exciting exoplanet I've seen in the past decade," says lead researcher Jason Dittmann from the Harvard-Smithsonian Centre for Astrophysics.

"We could hardly hope for a better target to perform one of the biggest quests in science – searching for evidence of life beyond Earth." 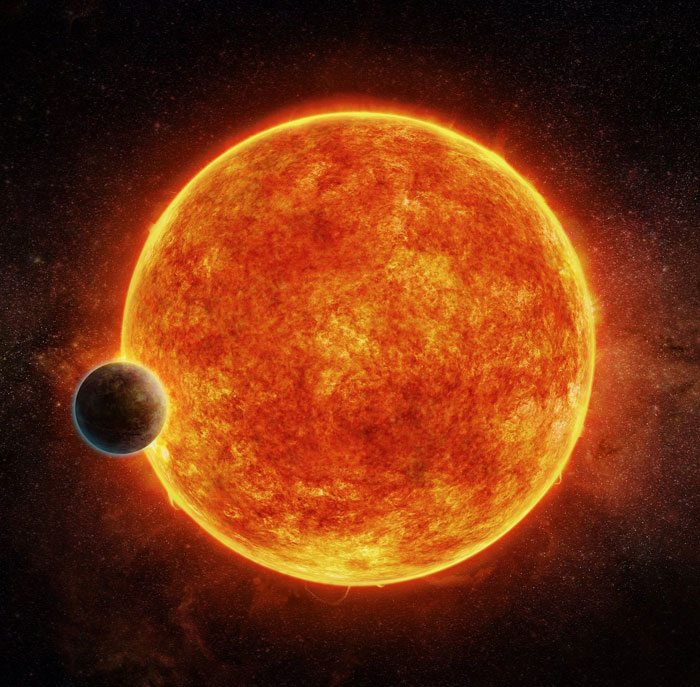 LHS 1140b is what's called a super-Earth – a planet with more mass than Earth, but less than 10 times as much. In this case, the exoplanet has a mass around seven times greater than Earth, but it's only 1.4 times the size – which the team attributes to a much higher density, likely consisting of a dense iron core.

But what makes LHS 1140b so intriguing for further analysis isn't its size or mass – but the fact that it orbits within the habitable zone of its host star, a faint red dwarf called LHS 1140, located in the Cetus constellation.

LHS 1140b is actually 10 times closer to its host star than Earth is to the Sun – but because LHS 1140 is also significantly cooler and dimmer than the Sun, it means the exoplanet doesn't get fried by the proximity, ultimately receiving only about half as much sunlight as Earth.

"The present conditions of the red dwarf are particularly favourable," says one of the team, astronomer Nicola Astudillo-Defru from Geneva Observatory in Switzerland.

That's important because the amount of heat and light coming from the star isn't so hot that liquid water can't exist on the planetary surface – something which is essential for life as we know it, and the definition of whether a planet falls within a star's habitable zone (aka Goldilocks zone).

The researchers detected LHS 1140b using the European Southern Observatory's (ESO) HARPS instrument at the La Silla Observatory in Chile.

The exoplanet is estimated to be around 5 billion years old, and may not have always been so hospitable – it's likely that the red dwarf star when younger may have been more volatile, potentially stripping water from LHS 1140b's atmosphere, if it once had one.

The team is hopeful however that the planet may have retained or regained an atmosphere, perhaps by trapping steam generated by magma oceans that may have boiled on the surface in its distant past.

To help verify that hypothesis, the team intends to further study the planet with the Hubble Space Telescope and the ESO's upcoming Extremely Large Telescope, due for completion in 2024 (a long time away, but hey, it is extremely large).

Of course, it's not the only distant world to get astronomers hugely excited in recent times. Just this month, scientists announced the detection of an atmosphere around another super-Earth called Gliese 1132b.

It's a similar distance from Earth at about 39 light-years, but as Fiona MacDonald reported for us at the time, just because these distant exoplanets offer promising signs of habitability, that's not confirmation of habitability until we know a lot more – nor is it proof of the ultimate thing we're really searching for… alien life itself:

"And let's not forget that we've recently been burned by the detection of the TRAPPIST–1 'sister solar system' and neighbouring Earth-like planet Proxima b, both of which are unlikely to be the friendly places for life we first thought they were."

But hey, nobody said it was easy, right? What we do know now is that LHS 1140b is sending us all the right signs to warrant some serious further investigation.

For now, that's all a space-loving science community can hope to ask for.

"The LHS 1140 system might prove to be an even more important target for the future characterisation of planets in the habitable zone than Proxima b or TRAPPIST–1," explain two of the team, Xavier Delfosse and Xavier Bonfils from the French National Centre for Scientific Research.

"This has been a remarkable year for exoplanet discoveries!"