No, This Company Isn't Really Scattering Your Loved One's Ashes in Space

Want to have your ashes scattered in space? It's a beautiful concept, but this might not be the solution you're looking for.

And, perhaps, we should also be careful about exactly how and where we do such a thing should we really start doing it properly.

It was the late, great Carl Sagan who wrote:

"All of the rocky and metallic material we stand on, the iron in our blood, the calcium in our teeth, the carbon in our genes were produced billions of years ago in the interior of a red giant star. We are made of star-stuff."

From star-stuff we may have been made; but no, we're not going to be returning to star-stuff just yet, in spite of the claims of a new company.

Unlike already established US-based space funeral companies Celestis and Elysium Space, which carry the ashes in orbit before returning to Earth, UK-based Ascension is offering a new type of funeral service, promising to scatter the ashes of the deceased in space.

The method of delivery is a helium high-altitude weather balloon that carries the cremated remains up into the sky, to a maximum altitude of around 35 kilometres (115,000 feet, or 22 miles), in the stratosphere. 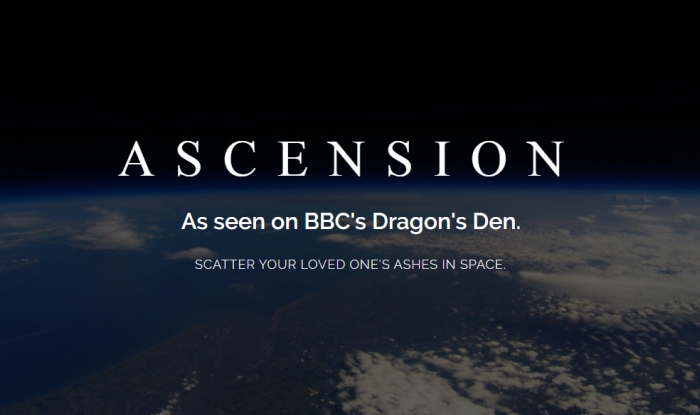 This, the company says, is officially in "near space," because it's past the Armstrong limit at 19 kilometres (62,000 feet) altitude. After this point, the atmosphere is so thin that water starts to boil at human body temperatures. Humans cannot survive without a pressure suit.

But experts disagree with this definition.

"I wouldn't say the Armstrong limit is considered a border between the atmosphere and space. Just as an example, Australia's current space legislation defines the beginning of space at 100 km, four times higher again," space archaeologist Alice Gorman of Flinders University told ScienceAlert.

"This is also known as the Kármán line - it divides space from the air, so below this you generally have aviation regulation as opposed to space treaties governing what people do."

"That's the limit where astronauts get their 'wings' badges," Michael Brown, an astronomer at Monash University, told ScienceAlert.

Both NASA and the Fédération Aéronautique Internationale use the Kármán line as the boundary that marks an astronaut.

So how does this 'space funeral' work? When the balloon reaches its maximum altitude, the cannister will open, releasing the ashes inside.

Most of the material, Ascension says on its website, will scatter across the Earth. The cannister, equipped with GPS trackers, will also fall back down, to be retrieved by the Ascension team, with a portion of the remains for the family to keep.

Experiments with non-human ashes, according to the company, have found that some particles can escape upwards and into orbit, although Gorman notes that, while that's possible, there's no real way of knowing for sure.

But she also notes that scattering ashes in space is probably not the best idea to start with.

"If ashes were scattered in orbit, which these are not, then they'd join the millions of tiny bits of space junk which are traveling at speeds of 7-8 km per second," she said.

"Junk this size causes damage to spacecraft by constant bombardment. Each impact is trivial but there's a cumulative effect. Fortunately in Low Earth Orbit, this stuff usually enters the Earth's atmosphere quickly."

Based on the company's website, the service does actually look quite beautiful. It just might not be quite the "scattering your loved one's ashes in space" you might have hoped for.

"I'm a 'space' purist and want at least 100 kilometre altitude," Brown noted. "Can't say I'm a fan of the [website's] tagline, since they are well below the 100 kilometre limit."

"I'd probably expect a lot higher if I were being told my ashes were going into space," Gorman said, "but I quite like the imagination of their scheme."

At time of publication, Ascension have not yet replied to our request for comment.