Mantis shrimps have eyes that put our peepers to shame. The small creatures can detect not just visible, but ultraviolet and polarised light, too - and they can even see cancer. No, you didn't misread that.

But just how a finger-sized arthropod processes so much visual detail with such a tiny brain has been something of a mystery.

Using a variety of microscopy techniques, researchers from Sweden, the US, and Australia analysed a set of structures within the animal's nervous system to better understand how such a small creature makes sense of the mind-blowing rainbow it sees.

In all, there are more than 450 species in the order Stomatopoda. In spite of their common name, none of them are shrimp. Or mantises, for that matter. They're more closely related to crabs and lobsters, varying in size from around 10 centimetres (about 4 inches) to more than 30 centimetres (about a foot).

One thing they all have in common is a visual system that would win the prize for 'Most Complex Eyes Ever Evolved'.

Exactly why they have such outstanding vision isn't all that clear, potentially involving mate-identification or even sharing secret messages other species can't pick up on. Whatever the reason, it has to require a lot of fine detail.

Our vision is pretty decent, but most of us have to make do with just a few types of light-sensing cell, providing peaks of sensitivity in just three parts of the electromagnetic spectrum. Still, even with just three colour channels, our brains can discriminate between some 10 million colours.

We can only imagine what the mantis shrimp sees. Its two compound eyes contains more than a dozen types of photoreceptor, several covering ultraviolet. What's more, they can also detect circularly polarised light thanks to specialised optical structures.

Just to show off, each eye not only moves independently on a stalk, it sees in 3D all on its own.

It's impressive, but it's also a lot of visual data for such a small animal, so naturally scientists have been interested in knowing how its relatively simple brain translates information from such complex eyes.

As a starting place, the research team focussed on a kidney-shaped blob of nerve cells packed inside each eye stalk, called a reniform body. First identified in invertebrates more than a century ago, the structure's presence and function in various species has been of interest ever since.

The researchers used classical staining and microscopy techniques to follow the pathways of nerves connecting the reniform bodies in mantis shrimps (seen in the box below) to other brain parts, creating a kind of functional map for their visual system. 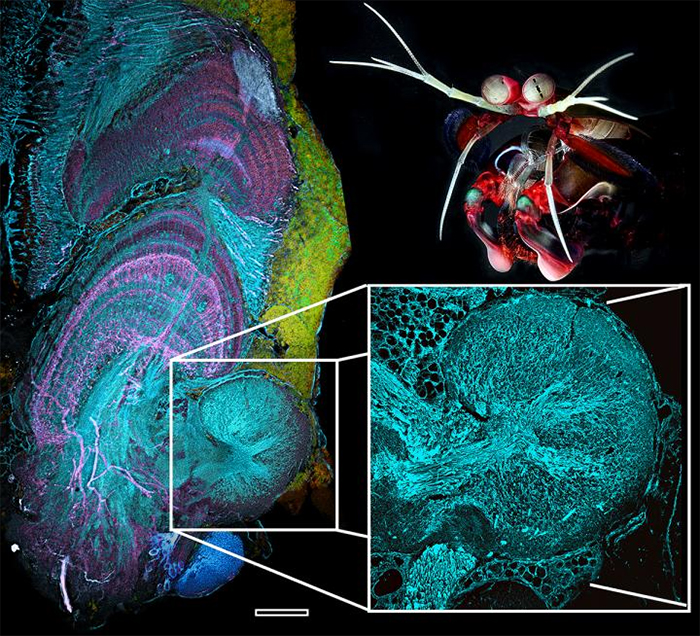 One significant link was identified with a unit called a lobula. In other invertebrates, this part of the brain takes the sum of visual information processed by other sections and converts it into something meaningful, such as a clearly defined shape.

"This arrangement may allow mantis shrimp to store quite high-level visual information," said neuroscientist Nicholas Strausfeld from the University of Arizona.

Another seemingly significant connection is with a neurological structure commonly found in insects called a mushroom body. These T-shaped arrangements of nerves are broadly responsible for learning, while also processing smells.

Strictly speaking, crustaceans aren't thought to have mushroom bodies, but stomatopods have something that for all purposes seems to serve the same purpose.

This complex link-up suggests visual information is processed into images by the lobula and then shared with a part of the brain that deals with memories.

"The fact that we were now able to demonstrate that the reniform body is also connected to the mushroom body and provides information to it, suggests that olfactory processing may take place in the context of already established visual memories," said Strausfeld

A couple of years ago, Strausfeld and his colleagues showed the reniform bodies in crabs served as centres for learning and memory. For mantis shrimp, that could mean a duplication of memory centres.

Just how and when stomatopods developed such specialised neurological units is now the big question. There's also more work to be done in understanding the implications of having such discrete memory units.

The next step for the researchers is to hunt for reniform-like structures in other animals, and see how they function there.

Given we're separated by hundreds of millions of years of evolution, it's hard to say just what the mantis shrimp's visual super powers can tell us about our own brains.

But given the kinds of technologies this amazing little animal has inspired, from cancer-hunting cameras to robust new materials, it might pay to learn as much as we can about how the mantis shrimp thinks as well.

This research was published in The Journal of Comparative Neurology.