After years in development, the world's first passive plastic collection device is going to be deployed in the Pacific Ocean in an attempt to do something about plastic pollution.

Dedicated to removing debris from the oceans, the device will be set up between California and Hawaii in the Great Pacific Garbage Patch, a region with a high concentration of plastic pollution in the North Pacific Gyre.

It was designed by The Ocean Cleanup, a foundation created by Dutch student Boyan Slat at the age of 18.

The collector is an easy to understand concept. Long, durable polyurethane booms filled with air float on top of the ocean, slowed by anchors to keep the collector moving more slowly than ocean currents, which will sweep the plastic right into the collectors.

They're arranged in an open U shape, held in place with cables to maximise their catching efficiency, and funnel the debris into a central holding tank.

Tightly woven nylon screens that marine life can't get tangled in hang from the boom to catch larger pieces of plastic swept along by ocean currents, to a depth of around 3 metres to collect debris - most of the pollution is at the surface, research conducted by the team found. Boats visiting the collection tanks periodically to clear out the plastics. A render of a collector. (The Ocean Cleanup)

According to The Ocean Cleanup's simulations, this system will be able to clean up half the Great Pacific Garbage Patch - around 36,000 tonnes of plastic debris - in a period of five years.

Not everyone is happy about the technology. Jan van Franeker of Wageningen Marine Research in the Netherlands called the project a "wasted effort," saying that marine plastic declines over time - and that stopping polluting the ocean is the best solution.

In 2014, oceanographers Kim Martini and Miriam Goldstein conducted a technical review of the project's feasibility study and found several flaws.

They note that the pilot study, on which the design of the collectors is based, only sampled the top 5 metres of the ocean, so it was inadequate for an accurate depth profile of ocean plastic.

They also critiqued the preliminary testing of the boom; the lack of a workable solution for biofouling or growth of organisms on the structures; and the impact on marine life that actually inhabits the North Pacific Gyre.

5 Gyres, a nonprofit organisation focused on reducing plastic pollution, noted that the collectors won't help in the reduction of microplastics, which can cause serious health problems when ingested by marine animals, including starvation because they have bellies full of material that's completely devoid of nutrition. 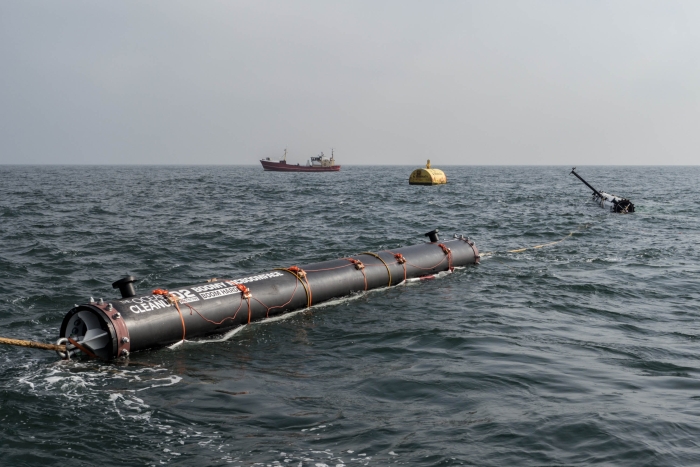 Prototype of a section of boom tested last year. (The Ocean Cleanup)

The team at The Ocean Cleanup have responded to many of these critiques, refining the design of the anchors, developing a strategy to use anti-biofouling coatings and noting that the problem they're trying to address is removing larger plastics from the ocean before they become microplastics.

"Most of [the plastic] is still large, which means that in the next few decades if we don't get it out, the amount of microplastics can be tenfold or 100-fold. It's this problem that's waiting out there to magnify many times unless we can take it out." Slat, now 23, told Fast Company.

But we won't know anything for certain until the collector has been put through its paces. The Ocean Cleanup is planning to deploy the first one by as early as July, and to bring home its first haul of retrieved ocean plastics by the end of the year.

"The plastic pollution problem has always been portrayed as something insolvable. The story has always been 'OK, we can't clean it up - the best we can do is not make it worse'. To me that's a very uninspiring message," Slat said.

"We as a humanity created this problem, so I think it's our responsibility also to help solve it."