Ancient Egyptian mummies adorned with tattoos mark a new milestone in the history of the art of tattooing.

The two mummies, one male and one female, are dated back to between 3351 to 3017 BCE, making them the oldest example of figural tattoo work known - and the oldest tattoos ever found on a female body.

Only Ötzi the Iceman, a mummified man who lived in Europe between 3400 and 3100 BCE, has older tattoos. But Ötzi's tattoos seem to be of a different kind entirely.

Ötzi had 61 tattoos of lines and crosses all over his body, created by rubbing soot into incisions. They were mostly clustered around his lower back and joints - places where he would have felt discomfort from the degenerative ailments he suffered.

This has led researchers to hypothesise that his tattoos may have been diagnostic or even therapeutic in nature, like a form of acupuncture.

By contrast, the two Egyptian mummies, named the Gebelein mummies for the region in which they were found, appear to have tattoos that are decorative, or symbolic in some way, according to the team led by researchers from the British Museum.

The male (Gebelein Man A) has two tattoos - a wild bull and a Barbary sheep on his upper arm - while the female (Gebelein Woman) has linear and S-shaped motifs inscribed on her upper arm and shoulder. 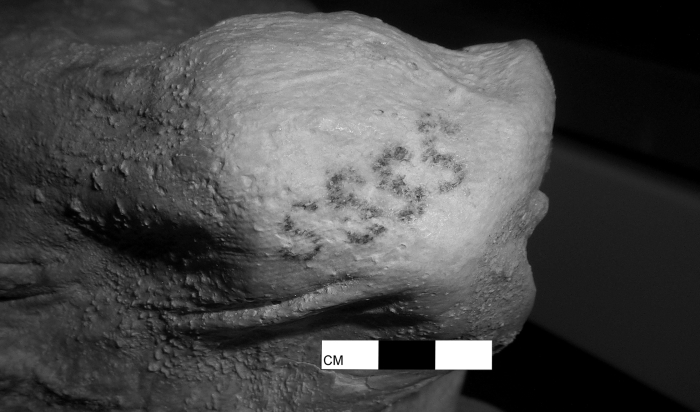 The S motif on the woman's shoulder. (The British Museum)

The mummies were actually excavated in the 1890s, and have been in the possession of the British Museum since the 1900s.

They predate Egypt's Pharaonic dynasties, and their mummifcation was completely natural - they were buried in shallow graves, and the heat, salinity and dryness of the Egyptian desert did the rest.

However, tattoos on mummies aren't always easy to see. Mummified skin turns leathery and discoloured, and tattoos can lighten.

In the case of Gebelein Man A, the tattoos on his arm appeared as a dark smudge under natural light, and remained unexamined for over a century.

It was only thanks to recent infrared photography that the tattoos could finally be noticed.

Previously, only women had been shown as tattooed in contemporary and earlier Predynastic Egyptian art, but Gebelein Man A demonstrates that both men and women bore tattoos.

Both mummies were tattooed into the dermis, using some sort of carbon-based ink - and the images the pair were sporting are well known from Predynastic Egyptian art.

The bull and the Barbary sheep on the man are both motifs seen in rock art, while the crooked line on the woman resembles staves held by figures on painted ceramics. The S motif is also found on Predynastic Egyptian ceramics. 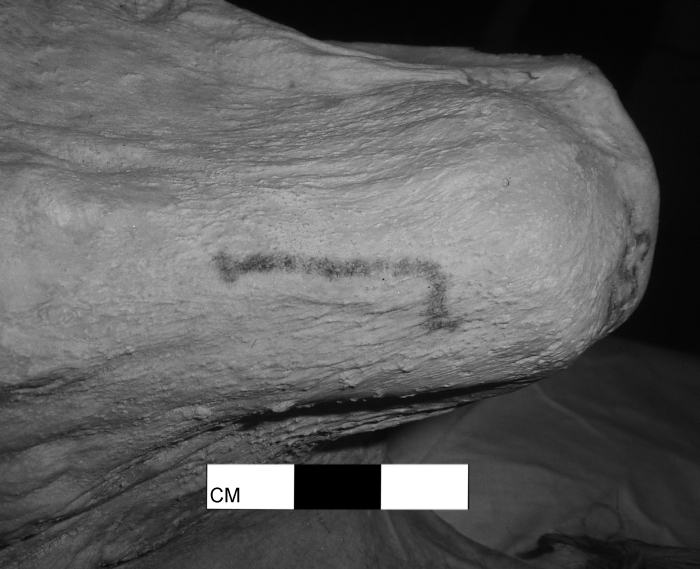 The staff-like motif on the woman's arm. (The British Museum)

All seven of the Gebelein mummies were examined for tattoos, but only Gebelein Man A and Gebelein Woman were found inked.

It's impossible to know what the significance of the tattoos could be, but given how important the motifs themselves seem to have been, it's possible the tattoos indicate some sort of status, especially as they were placed in highly visible locations on the body.

The next evidence for tattoos in Egypt didn't occur for another 1,000 years or so.

"These finds demonstrate conclusively that tattooing was practised during Egypt's Predynastic period and they push back the evidence for tattooing in Africa by a millennium," the researchers wrote.

"As the oldest known tattooed figural motifs, they add to our understanding of the range of potential uses of tattoos at the dawn of Ancient Egyptian civilisation and expand our view of the practice of tattooing in prehistoric times."

The research is due to appear in the Journal of Archaeological Science.