The Oldest Known Message in a Bottle Was Just Found, And The Contents Are Fascinating

The type of bottle the message was contained in. (Western Australian Museum)

A message in a bottle dating back to 1886 - 132 years ago - has been found half-buried in the sand of a Western Australian beach.

According to its contents, it spent more than a century swimming around, before it was discovered nearly 950 kilometres (590 miles) from where it was thrown off a ship in the Indian Ocean.

Beachgoer Tonya Illman found the old gin bottle with a rolled-up message in January this year, 50 metres (164 feet) from the shoreline at the high water mark on Wedge Island.

Even though it was missing a cork, surprisingly both the bottle and its contents were largely unscathed.

The contents were not, as cliché might suggest, a cry for help from some poor pariah marooned on a desert island, but part of a German experiment that ran from 1864 to 1933 to chart the ocean currents.

During this time, thousands of bottles were thrown overboard from German ships. Each contained a slip of paper marked with the date, the exact coordinates of the ship when the bottle was jettisoned, the name of the ship, its home port, and the route it was travelling.

On the other side of the note was a questionnaire, where whoever found the bottle would write down when and where the bottle was found, then send the note back either to the German Naval Observatory in Hamburg or the nearest German Consulate.

The ink from the captain's pen had faded, so Tonya's husband, Kym Illman, set to work investigating, and was able to make out some of the writing - the date (12 June 1886), the coordinates, the route (Cardiff to Makassar) and the name of the ship (a bark, or barque, named Paula). 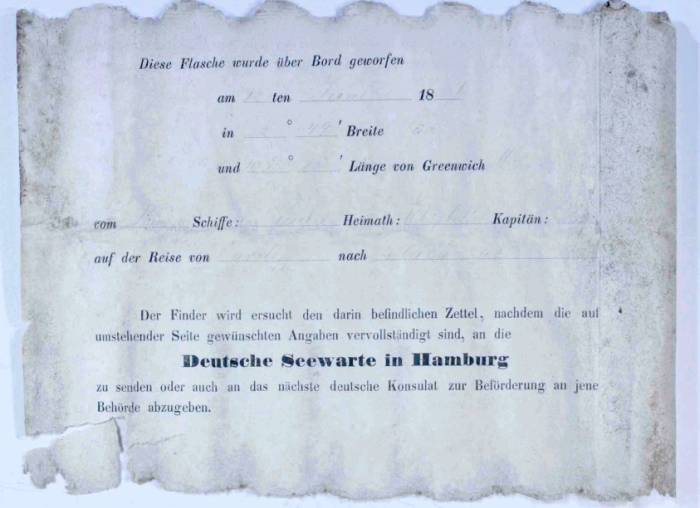 This bottle was thrown overboard
On 12 th June 18 86
In 32° 49′ Latitude South
And 105° 25′ Longitude from Greenwich East
From : Bark Ship: Paula Home (port): Elsfleth Captain: D [illegible]
On her journey from: Cardiff To: Macassar
The finder is requested to send the slip in the bottle to the
German Naval Observatory in Hamburg
or the nearest consulate for the return to the same agency after filling in the
information on the back.

They took the message and bottle to the Western Australian Museum for confirmation. Experts there confirmed that the bottle and paper dated to the correct time period, and that Paula did sail the specified route in 1886.

But the most spectacular confirmation didn't come until after the WA Museum had contacted researchers in Germany.

"Incredibly, an archival search in Germany found Paula's original Meteorological Journal and there was an entry for 12 June 1886 made by the captain, recording a drift bottle having been thrown overboard. The date and the coordinates correspond exactly with those on the bottle message," said Ross Anderson, Assistant Curator Maritime Archaeology at the WA Museum.

"A handwriting comparison of the bottle message signed by the captain and Paula's Meteorological Journal, shows the handwriting is identical in terms of cursive style, slant, font, spacing, stroke emphasis, capitalisation and numbering style.

"Comparison of the original message slips that had been returned for the year 1886 also confirms the type of message, wording and print layout is identical to the one discovered at Wedge Island in January."

Of the thousands of bottles jettisoned from German ships as part of the experiment, this discovery is only the 663rd. It's also the oldest to date - the previous record-holder was 108 years and 138 days between dispatch and recovery, and was part of a similar experiment run out of Britain.

The Illmans have generously loaned their bottle to the Western Australian Museum for display, and you can read the Museum's report about it online here.