We're not going to fly through a nebula, not in the lifetimes of anyone alive today. Possibly not ever in anyone's lifetime.

But based on data from the Hubble and Spitzer telescopes, we now have a feel for what it may be like to fly through one of the most famous ones - the Orion nebula.

The nearest bright nebula to us is around 695 light-years away, and the Orion nebula is much farther, around 1,344 light-years away. So even if we had light-speed travel, it would take many generations aboard a generation ship to get there.

But by combining visible and infrared images of the giant nebula's star-forming heart, astronomers and visualisation specialists have created a 3D flythrough so that you can get a taste for what it might feel like to be a space explorer.

The newly released video is an update and expansion of previous iterations of Orion nebula flythroughs based on Hubble data in 2014, and a 2010 snippet of an IMAX film about the Hubble Space Telescope narrated by Leonardo DiCaprio.

The three-minute movie is intended to convey what space is really like - not the static 2D images we usually see, but huge, three-dimensional, dynamic and evolving.

"By adding depth and structure to the amazing images, this flythrough helps elucidate the universe for the public, both educating and inspiring," said Space Telescope Science Institute visualisation scientist Frank Summers. 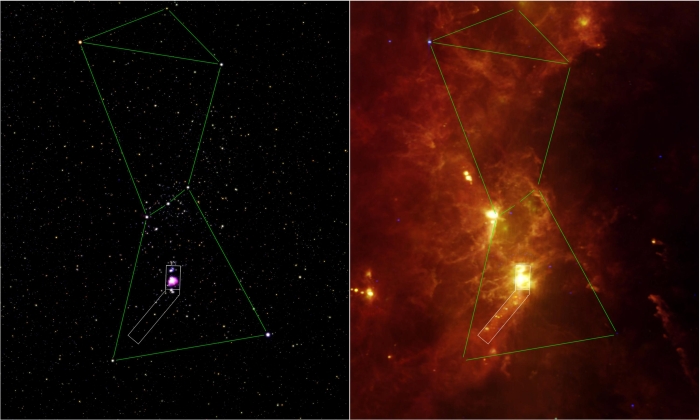 To us on Earth, looking up at the night sky with naked eyes, the Orion nebula is just a pinprick that appears as a star. In reality it's huge, around 24 light-years across, and contains an intense stellar nursery - a region wherein the nebula's dust is furiously coalescing into young stars.

It's a young nebula, only about two million years old, so it has provided a lot of information about how stars and planets are formed.

By combining Hubble data with Spitzer data, the team has been able to provide a much more detailed flythrough. Hubble's visible data shows very hot regions and objects, since they are more likely to glow in the visible spectrum, while Spitzer's infrared data shows cooler objects and regions.

The team modelled the nebula like a topography, adding in wispy gas, bow shocks, stars and protoplanetary discs, switching the view between Hubble and Spitzer data to both help viewers understand the nebula, and to understand how this sort of science works.

"The main thing is to give the viewer an experiential understanding, so that they have a way to interpret the images from telescopes," Summers said.

"It's a really wonderful thing when they can build a mental model in their head to transform the two-dimensional image into a three-dimensional scene."