Ötzi The Iceman Had Way More Tattoos Than You

Although he looks kind of like a papier-mache prop from a bad horror movie (in photographs, anyway) Ötzi the Iceman is actually Europe's oldest-known natural human mummy.

He lived around 3,300 BC - during the Chalcolithic, or copper age - and his incredibly well-preserved remains were trapped in glacial ice for more than 5,000 years until his eventual discovery in 1991, by German tourists hiking in the alps near the border of Austria and Italy.

Interestingly, his corpse is covered in a plethora of tattoos. The full extent of this body art, however, has been difficult for researchers to ascertain, mostly because the faded artwork has become indistinguishable to the naked eye against his dark, leathery skin.

A team from the European Research Academy (EURAC) in Italy (where they have actually set up an institute dedicated entirely to the Iceman) has been interested in understanding more about Ötzi's prehistoric body art, considered to comprise the earliest documented tattoos on the European continent - and some of the oldest in the world.

Led by Marco Samadelli, the team used a non-invasive photographic technique to map, in unprecedented detail, every single tattoo on Ötzi's body. They counted 61 tattoos in total, grouping these into subsets based on appearance, and even identified a previously undiscovered marking on his ribcage. 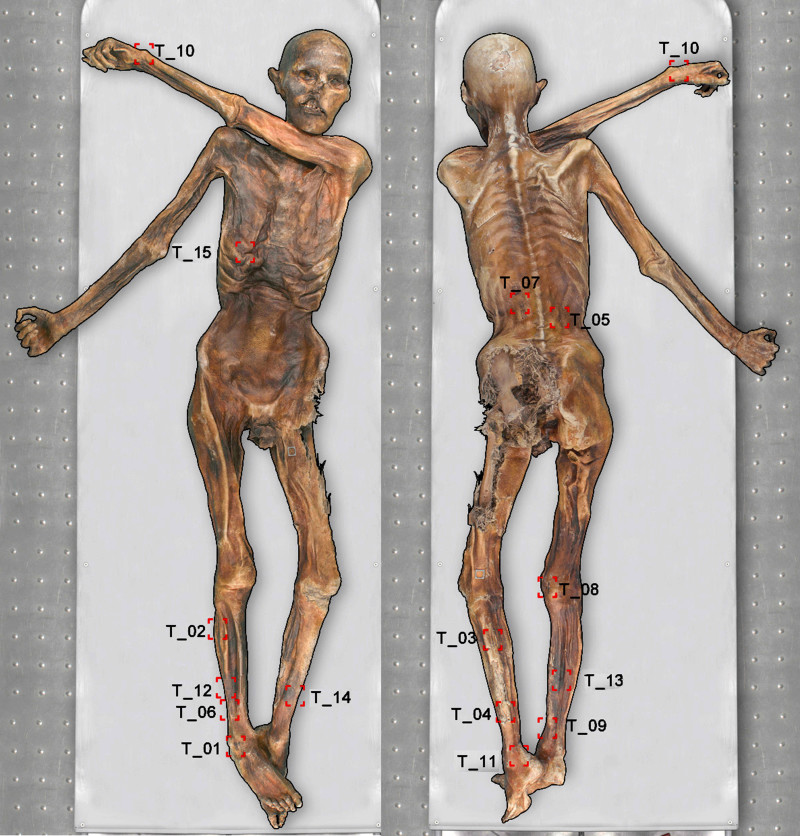 The location of the Iceman's tattoos (courtesy Marco Samadelli/EURAC)

Many of Ötzi's more visible tattoos had been located on areas such as the lower back, on the legs - between the knee and the foot - and on his wrist, leading some researchers to suspect this body art served a medicinal function, possibly to relieve joint pain.

But the location of this small, previously unidentified tattoo on the ribcage, which consists of four parallel lines, has cast some doubt on that theory.

As the EURAC press release states, "this investigation has given researchers a new piece to add to the jigsaw puzzle when trying to tease out whether prehistoric tattoos had a therapeutic, symbolic or religious significance."

Of note, is that the Iceman's tattoos were not produced by needles, but by rubbing charcoal into very fine incisions in the skin.

To see them all in detail, Samadelli ventured inside Ötzi's specially refrigerated cell in South Tyrol Museum of Archaeology in Italy, to photograph sections of the mummy from different angles.

For a given section, he would take seven photos, each of them capturing a different wavelength ranging from infrared to ultraviolet.

"This enabled us to cover the different depths at which the carbon powder used for the tattoos had been deposited. The ultraviolet waves were adequate for the upper skin layers, whilst we resorted to infrared light for the lower layers," explained Samadelli in the press release.

The team's findings have been published in the Journal of Cultural Heritage.