Astronomers Have Found Potential Life-Supporting Conditions on The Nearest Exoplanet

Artist impression of an exoplanet from its moon. (IAU/L. Calçada)

In August of 2016, astronomers from the European Southern Observatory (ESO) announced the discovery of an exoplanet in the neighboring system of Proxima Centauri. The news was greeted with considerable excitement, as this was the closest rocky planet to our Solar System that also orbited within its star's habitable zone.

Since then, multiple studies have been conducted to determine if this planet could actually support life.

Unfortunately, most of the research so far has indicated that the likelihood of habitability are not good. Between Proxima Centauri's variability and the planet being tidally-locked with its star, life would have a hard time surviving there.

However, using lifeforms from early Earth as an example, a new study conducted by researchers from the Carl Sagan Institute (CSI) has shown how life could have a fighting chance on Proxima b after all. 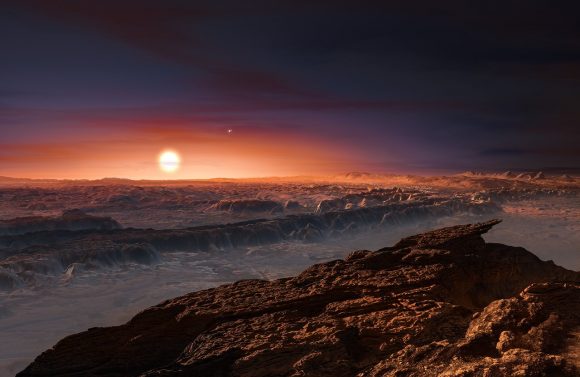 The study, which recently appeared in the Monthly Notices of the Royal Astronomical Society, was conducted by Jack O'Malley-James and Lisa Kaltenegger – a research associate and the director of the Carl Sagan Institute at Cornell University.

Together, they examined the levels of surface UV flux that planets orbiting M-type (red dwarf) stars would experience and compared that to conditions on primordial Earth.

The potential habitability of red dwarf systems is something scientists have been debating for decades. On the one hand, they have a number of attributes that are encouraging, not the least of which is their commonality.

Essentially, red dwarfs are the most common type of star in the Universe, accounting for 85 percent of the stars in the Milky Way alone.

They also have the greatest longevity, with lifespans that can last into the trillions of years. Last, but not least, they appear to be the most likely stars to host systems of rocky planets.

This is attested to by the sheer number of rocky planets discovered around neighboring red dwarf stars in recent years – such as Proxima b, Ross 128b, LHS 1140b, Gliese 667Cc, GJ 536, the seven rocky planets orbiting TRAPPIST-1.

However, red dwarf stars also present a lot of impediments to habitability, not the least of which is their variable and unstable nature. As O'Malley-James explained to Universe Today via email:

"The chief barrier to the habitability of these worlds is the activity of their host stars. Regular stellar flares can bathe these planets in high levels of biologically harmful radiation. Furthermore, over longer periods of time, the onslaught of X-ray radiation and charged particle fluxes from the host stars places the atmospheres of these planets at risk of being stripped away over time if a planet cannot replenish its atmosphere fast enough."

For generations, scientists have struggled with questions regarding the habitability of planets that orbit red dwarf stars.

Unlike our Sun, these low-mass, ultra-cool dwarf stars are variable, unstable and prone to flare-ups. These flares release a lot of high-energy UV radiation, which is harmful to life as we know it and capable of stripping a planet's atmospheres away.

This places significant limitations on the ability of any planet orbiting a red dwarf star to give rise to life or remain habitable for long. However, as previous studies have shown, much of this depends on the density and composition of the planets' atmospheres, not to mention whether or not the planet has a magnetic field.

To determine if life could endure under these conditions, O'Malley-James and Kaltenegger considered what conditions were like on planet Earth roughly 4 billion years ago.

At that time, Earth's surface was hostile to life as we know it today. In addition to volcanic activity and a toxic atmosphere, the landscape was bombarded by UV radiation in a way that is similar to what planets that orbit M-type stars experience today.

To address this, Kaltenegger and O'Malley-James modeled the surface UV environments of four nearby "potentially habitable" exoplanets – Proxima-b, TRAPPIST-1e, Ross-128b and LHS-1140b – with various atmospheric compositions. These ranged from ones similar to present-day Earth to those with "eroded" or "anoxic" atmospheres – i.e. those that don't block UV radiation well and don't have a protective ozone layer. 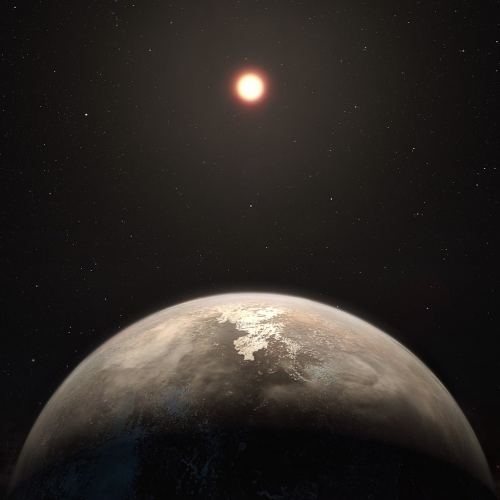 These models showed that as atmospheres become thinner and ozone levels decrease, more high-energy UV radiation is able to reach the ground. But when they compared the models to what was present on Earth, roughly 4 billion years ago, the results proved interesting. As O'Malley-James said:

"The unsurprising result was that the levels of surface UV radiation were higher than we experience on Earth today. However, the interesting result was that the UV levels, even for the planets around the most active stars, were all lower than the Earth experienced in its youth. We know the young Earth supported life, so the case for life on planets in M star systems may not be quite so dire after all."

What this means, in essence, is that life could exist on neighboring planets like Proxima b right now despite being subjected to harsh levels of radiation. If you consider the age of Proxima Centauri – 4.853 billion years, which is roughly 200 million years older than our Sun – the case for potential habitability may become even more intriguing.

The current scientific consensus is that the first lifeforms on Earth emerged a billion years after the planet formed (3.5 billion years ago). Assuming Proxima b formed from a protoplanetary debris disk shortly after Proxima Centauri was born, life would have had enough time to not only emerge, but get a significant foothold.

While that life may consist solely of single-celled organisms, it is encouraging nonetheless. Aside from letting us know that there could very well be life beyond our Solar System, and on nearby planets, it provides scientists with constraints on what type of biosignatures may be discernible when studying them. As O'Malley-James concluded:

"The results from this study builds the case for focusing on life on Earth a few billion years ago; a world of single-celled microbes – prokaryotes – that lived with high UV radiation levels. This ancient biosphere may have the best overlaps with conditions on habitable planets around active M stars, so could provide us with the best clues in our search for life in these star systems."

As always, the search for life in the cosmos begins with the study of Earth, since it is the only example we have of a habitable planet. It is therefore important to understand how (i.e. under what conditions) life was able to survive, thrive and respond to environmental changes throughout Earth's geological history.

For while we may know of only one planet that supports life, that life has been remarkably diverse and has changed drastically over time.

Be sure to check out this video about these latest findings, courtesy of the CSI and Cornell University: