Over 140 New Nazca Lines Have Been Discovered, And We Finally Have Clues to Their Use

Scientists have discovered over 140 new geoglyphs known as Nazca lines: a mysterious, ancient cluster of giant figures etched long ago into the desert terrain of southern Peru.

These massive, sprawling representations of humans, animals, and objects date back in some cases 2,500 years, and are so large, many of them can only be identified from the air.

Now archaeologists from Japan's Yamagata University report that a long-term research effort conducted since 2004 has uncovered 143 previously unknown Nazca geoglyphs – with one carved figure, which had eluded human detection, being discovered by artificial intelligence.

In all, the newly identified geoglyphs are thought to have been created between at least 100 BCE and 300 CE. While the purpose of these large motifs drawn by the ancient Nazca culture remains debated, we do at least know how they were constructed.

"All of these figures were created by removing the black stones that cover the land, thereby exposing the white sand beneath," the research team explains.

Previous hypotheses have suggested the Nazca society shaped the giant geoglyphs – some measuring hundreds of metres long – to be seen by deities in the sky, or that they may serve astronomical purposes.

In the new research, led by anthropologist and archaeologist Masato Sakai, the team analysed high-resolution satellite imagery of the Nazca region, as well as conducting fieldwork, and identified two main types of geoglyphs.

The researchers think the larger Type A geoglyphs, often shaped like animals, were ritual places where people held ceremonies that involved the destruction of various pottery vessels.

By contrast, the smaller Type B motifs, were located along paths, and may have acted as wayposts to orientate travellers – possibly towards a larger Type A ritual space where people would congregate.

Some of these Type B designs are really quite tiny, with the smallest of the new discoveries measuring under 5 metres (16 feet) – something that makes discovering the often faint lines a difficult task, especially when coupled with the enormous expanse of the Nazca desert region.

To that end, in a recent experimental collaboration with researchers from IBM that began in 2018, the team used a deep learning AI developed by the company, running on a geospatial analytics system called the IBM PAIRS Geoscope.

The learning network – the IBM Watson Machine Learning Accelerator (WMLA) – sifted through huge volumes of drone and satellite imagery, to see if it could spot any hidden markings bearing a relation to the Nazca lines.

The system found a match: the faded outline of a small Type B humanoid-like figure, standing on two feet.

While the symbolic meaning of this strange and ancient character is not yet clear, the researchers point out that geoglyph was situated near a path, so it may have been one of the hypothesised waypost markers. 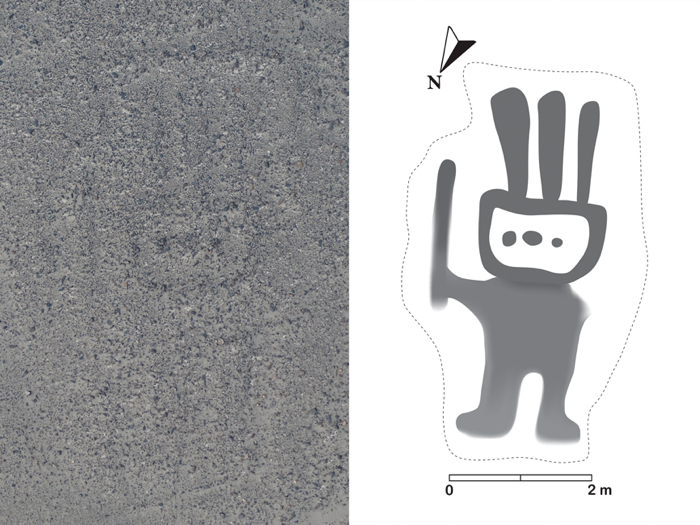 All told, the remarkable mystery of the Nazca lines is still far from being solved, but now that the Yamagata team and IBM have said they will continue working together to locate more of these ancient geoglyphs in the future, who knows just what – or whom – we'll find next?

A summary of the ongoing research is available at the Yamagata University website.