Scientists have linked a surge in Earth's oxygen levels some 455 million years ago with an explosion in biodiversity on the planet, as nature took advantage of the extra breathing space to transform marine life and develop new species.

That boom in biodiversity is well known – it's called the Great Ordovician Biodiversification Event – but this is the first time we've been able to match it with a major increase in life-giving oxygen.

However, the team of researchers is keen to emphasise that more oxygen in the air and water was probably only one of the reasons why life flourished on Earth at this time, during the Ordovician period around 445-485 million years ago.

"We made another link between biodiversification and oxygen levels, but this time during the Ordovician where near-modern levels of oxygen were reached about 455 million years ago," says lead researcher Cole Edwards, a geological and environmental scientist from Appalachian State University in North Carolina.

"It should be stressed that this was probably not the only reason why diversification occurred at that time. It is likely that other changes – such as ocean cooling, increased nutrient supply to the oceans and predation pressures – worked together to allow animal life to diversify for millions of years."

Peering this far into the past is tricky, but the new link was established by studying limestone formed around the time, trapping fossils of marine creatures in it, as well as working backwards from geological samples taken in the US, Canada, and South America.

Based on that analysis, oxygen levels in the oceans appeared to rise from roughly 10-13 percent to hit approximately 25 percent during the period.

At the same time, there was a three-fold increase in biodiversity: more marine life, big changes in species types, and even shifts in the composition of the ocean floors.

Exactly how the two are linked isn't clear cut though. The researchers say increased oxygenation could have had an indirect rather than a direct effect on ecosystems – by increasing overall temperatures, for example, and making Earth more conducive to life that way.

"Oxygen and animal life have always been linked, but most of the focus has been on how animals came to be," says one of the team, Matthew Saltzman from Ohio State University.

"Our work suggests that oxygen may have been just as important in understanding how animals came to be so diverse and abundant." 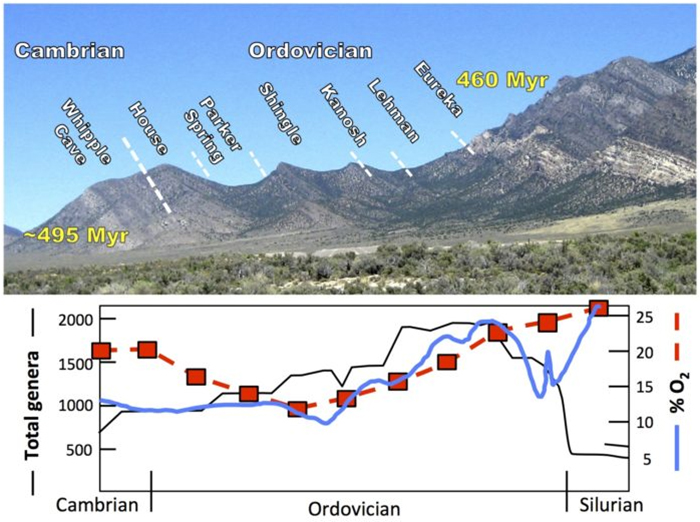 How oxygen levels and biodiversity match according to limestone rock samples. (Cole Edwards)

As the researchers point out, a cooling of the oceans and an increased supply of nutrients would have undoubtedly helped give life a leg up as well as higher levels of oxygen.

Another idea popular with scientists is that asteroid impacts helped life to flourish, but we're talking about so many millions of years ago, it's difficult to be sure.

The new analysis could shift our thinking in terms of the timeline for how Earth reached the levels of atmospheric oxygen we enjoy breathing today, and that in turn can help shed new light on how the earliest species grew and diversified.

It might also mean a reassessment of the Cambrian explosion, a point in time around 541 million years ago when creatures in most of the categories we use today first appeared.

"This study suggests that atmospheric oxygen levels did not reach and maintain modern levels for millions of years after the Cambrian explosion, which is traditionally viewed as the time when the ocean-atmosphere was oxygenated," says Edwards.

"In this research, we show that the oxygenation of the atmosphere and shallow ocean took millions of years, and only when shallow seas became progressively oxygenated were the major pulses of diversification able to take place."