It used to be thought extinct - but this week researchers have announced the discovery of a whopping 18 new-to-science pelican spiders living in Madagascar.

The spiders are so-named because their strangely shaped heads and massive mouthparts resemble a pelican's head - and they behave every bit as oddly as they look.

First discovered in 1854 in a specimen preserved in a piece of amber dating back 50 million years ago, to the Eocene Epoch, naturalists initially thought the peculiar creature a relic of a long-bygone age.

But then in 1881, living pelican spiders were found in Madagascar, and became known for their peculiar morphology. They are relatively small creatures, between 2 and 8 millimetres in length, and have a strange, elongated head with a "neck," from which protrudes a set of extended jaws.

They're also known as assassin spiders because of how they hunt - and what they hunt. Instead of spinning webs to catch food, they'll prowl the forest at night, following silk draglines spun by other spiders.

When they locate their prey, they pluck at the threads of its web, mimicking the vibrations of a struggling insect. And when the web's owner comes to investigate, the pelican spider strikes, impaling the unfortunate wriggling spiders on those long jaws.

Their habitats are remote forests in Australia, South Africa and Madagascar, and this, combined with their diminutive size, has led to relatively little about them being known - until recently.

Now they've been further narrowed down, thanks to the Smithsonian's National Museum of Natural History curator of arachnids and myriapods Hannah Wood and entomologist Nikolaj Scharff of the University of Copenhagen.

Together, they worked to examine and analyse hundreds of Madagascan pelican spider specimens in the field and in museum collections, sorting them into species and scientifically describing them.

Focussing on the Eriauchenius and Madagascarchaea genera, the team sorted them into 26 individual species - 18 of which are entirely new to science. 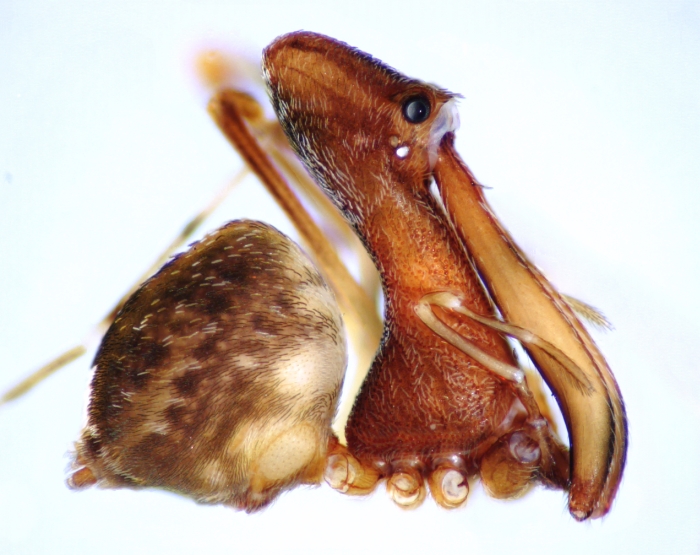 Although all have the same "pelican" shape, the 26 species can be distinguished from one another by such features as differing jaw lengths, differing numbers of spines, and differing patterns on their abdomens.

Interestingly, the species still living today are remarkably similar to those found preserved in amber, from up to 165 million years ago in the Jurassic era - making them something of a living fossil. And, because they were thought extinct when first discovered but then found living again, they can be considered a Lazarus taxon.

Work is still being conducted in Madagascar, one of the most biodiverse areas on the planet and currently under threat from deforestation, to collect information on arthropod species. Wood believes there's a lot about the creatures who live there that we still don't know.

"I think there's going to be a lot more species that haven't yet been described or documented," she said.

The paper describing the 26 species has been published in the journal ZooKeys.

You can see more images of the spiders in this video slideshow accompanying a talk given by Hannah Wood:

Trending News
Scientists Just Caught Bacteria Using a Never-Before-Seen Trick to Avoid Antibiotics Health3 days ago
Astronomers Spot The Biggest Galaxy Ever, And The Scale Will Break Your Brain Space4 days ago
Wild New Hypothesis Suggests IBS Could Be a Form of 'Gravity Intolerance' Health4 days ago