A conspiracy theorist's YouTube video about how this ancient Greek grave marker depicts a laptop more than 2,000 years before personal computers were even a thing has resurfaced, and went viral over the weekend.

We obviously don't need to tell you that this definitely is not a laptop, and no, the ancient Greeks didn't possess the technology to go time travelling in search of a better way to communicate with the Oracle of Delphi - a divine being who acted as the official conduit between man and the gods - but what the hell is it?

Currently on display at the J. Paul Getty Museum in California, the marble carving entitled "Grave Naiskos of an Enthroned Woman with an Attendant" has been dated to around 100 BC, and sourced possibly to Delos - a tiny island to the east of the Greek mainland with enormous mythological, cultural, and archaeological importance.

Stretching 94 cm high and more than 120 cm across, the carved funerary relief depicts a wealthy woman reclining on an armchair, reaching out to an object being offered up by a servant girl. "The depiction of the deceased reaching out for an item held by a servant has a long history in Greek funerary art and probably alludes to the hope of continuing earthly pleasures in the afterlife," the Museum notes. 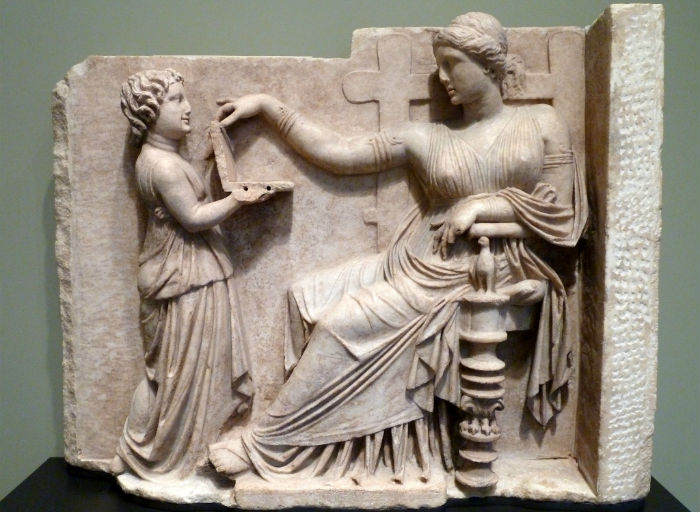 The official description of the laptop-like item is a "shallow chest", and despite YouTuber StillSpeakingOut (he sure is) insisting that a tourist's picture taken from a different angle shows that the object is too wide and narrow to be a jewellery box, US-based classical archaeologist Dorothy Lobel told Discovery News what we're all thinking.

"The claim is ridiculous as it is clearly a box," she says.

Another well-known classical archaeologist, Janet Burnett Grossman, told Discovery that the object is likely a flat box or a mirror, while others have suggested that it's a wax writing tablet, which were used to record official documents at the time, such as birth certificates.

"If we look at other similar depictions in Greek art, we can see that a tablet - of the ancient variety, not the modern kind - looks a lot like a small laptop, and like the object in this grave marker," Kristina Killgrove writes for Forbes. "Usually it is men who are depicted with a wax tablet, though, so why this wealthy woman? There is also evidence of the goddess Athena being shown with a writing tablet and stylus, so the association between the wealthy deceased woman and Athena via a wax tablet makes some sense." 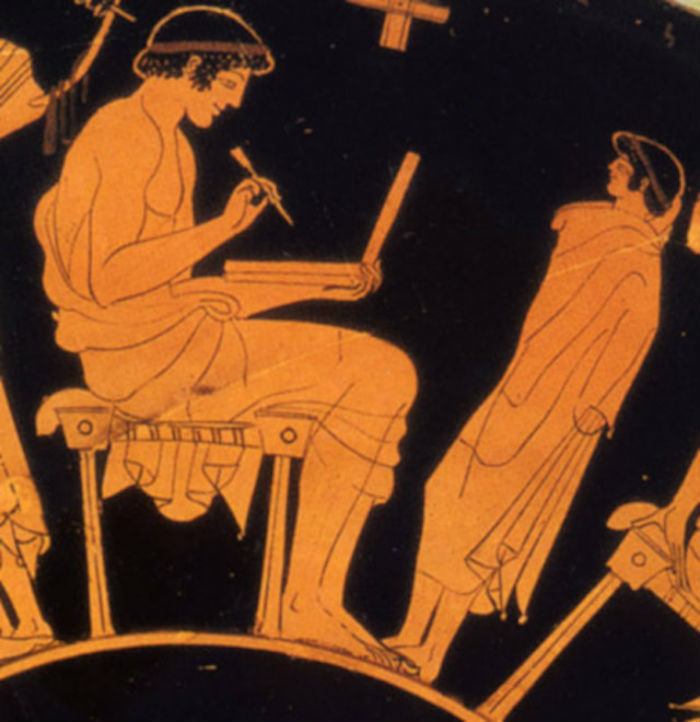 Red figure vase by the Douris painter (dated to around 500 BC), housed by Germany's Museum Berlin. Credit: Pottery Fan/Wikimedia

Okay sure, but what about those USB ports weird holes on the side?

As Killgrove notes, conspicuous holes aren't uncommon in ancient Greek sculpture work, as they were sometimes embellished with perishable materials, such as holes drilled into the fists of soldiers or the heads of horses to allow for realistic reigns to be added in. Maybe the box had an elaborately carved wooden face that slotted into the two holes.

"This particular stele shows evidence of reworking," adds Killgrove. "It was originally a three-sided grave marker, but it is now missing the top pediment, the wall on the left side, and an inscription on the bottom. The holes could relate to any of the pieces that are now missing."

So there you have it - the conspiracy theory that didn't need debunking: debunked.

If nothing else, it's a nice excuse to pay attention to an incredibly beautiful and skilful work created by humans more than two millennia ago, and for archaeologists to take some time out of their busy day to deliver a sick burn or two, like this one from Lobel King:

"Any time traveler would know that laptops are powered by electricity, whilst the Greeks did not have sockets."