A Room Full of Eerie, Masked Idols Has Been Discovered in Peru

Deep in the enormous citadel of an ancient Peruvian culture, archaeologists have uncovered a corridor containing 19 mysterious black wooden statues.

Some are wearing masks of clay, tucked into special alcoves that line the walls. The eerie line-up was discovered in the ruins of the great Chimú culture capital city of Chan Chan, which is still rendering up its secrets.

They're around 800 years old, and may have served as "guardian"-type figures, according to the archaeologists who uncovered them.

"In the passageway, recently found in the citadel of Chan Chan, 19 wooden idols covered with clay masks have been found," Minister of Culture Patricia Balbuena announced at a press conference. 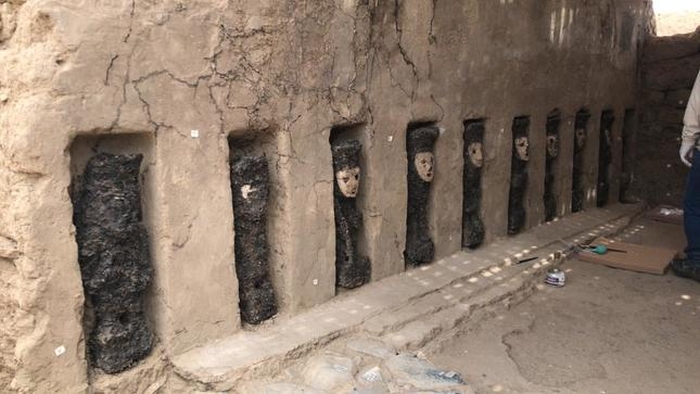 Each stands about 70 centimetres tall (27.5 inches), and each of the figures represents a different anthropomorphic character. Their masks are of beige clay, and each carries a sceptre, with a circular object on the back that could represent a shield.

The 33-metre (108.2-foot) passageway lined by these unnerving figures likely led to a ceremonial courtyard in the Utzh An walled complex.

"They could belong to the middle stage of Chan Chan, between 1100 and 1300 CE, and we would be talking about the oldest sculptures known on this site."

In addition to the statues, the outside walls of the passageway were decorated with a spectacular mud relief mural. It is dominated by wave motifs, scapes which depict fishing nets, and scrolls.

Chan Chan, which was listed as a UNESCO World Heritage site in 1986, was the largest city in Pre-Columbian America, and the largest adobe city in the world, with over 10,000 buildings. It thrived from around 900 to 1470 CE, when it was defeated by and incorporated into the Inca Empire.

From this point, the city fell into decline, until it was allowed to fall into ruins.

Current excavation and restoration work on the city commenced in June 2017, and is expected to run until May 2020.