According to theory, if you smash two photons together hard enough, you can generate matter: an electron-positron pair, the conversion of light to mass as per Einstein's theory of special relativity.

It's called the Breit-Wheeler process, first laid out by Gregory Breit and John A. Wheeler in 1934, and we have very good reason to believe it would work.

But direct observation of the pure phenomenon involving just two photons has remained elusive, mainly because the photons need to be extremely energetic (i.e. gamma rays) and we don't have the technology yet to build a gamma-ray laser.

"In their paper, Breit and Wheeler already realized this is almost impossible to do," said physicist Zhangbu Xu of Brookhaven Lab.

"Lasers didn't even exist yet! But Breit and Wheeler proposed an alternative: accelerating heavy ions. And their alternative is exactly what we are doing at RHIC."

But what do accelerated ions have to do with photon collisions? Well, we can explain.

The process involves, as the collider's name suggests, accelerating ions - atomic nuclei stripped of their electrons. Because electrons have a negative charge and protons (within the nucleus) have a positive one, stripping it leaves the nucleus with a positive charge. The heavier the element, the more protons it has, and the stronger the positive charge of the resulting ion.

The team used gold ions, which contain 79 protons, and a powerful charge. When gold ions are accelerated to very high speeds, they generate a circular magnetic field that can be as powerful as the perpendicular electric field in the collider. Where they intersect, these equal fields can produce electromagnetic particles, or photons.

"So, when the ions are moving close to the speed of light, there are a bunch of photons surrounding the gold nucleus, traveling with it like a cloud," Xu explained.

At the RHIC, ions are accelerated to relativistic speeds - those that are a significant percentage of the speed of light. In this experiment, the gold ions were accelerated to 99.995 percent of light speed.

This is where the magic happens: When two ions just miss each other, their two clouds of photons can interact, and collide. The collisions themselves can't be detected, but the electron-positron pairs that result can.

However, it's not enough to just detect an electron-positron pair, either. 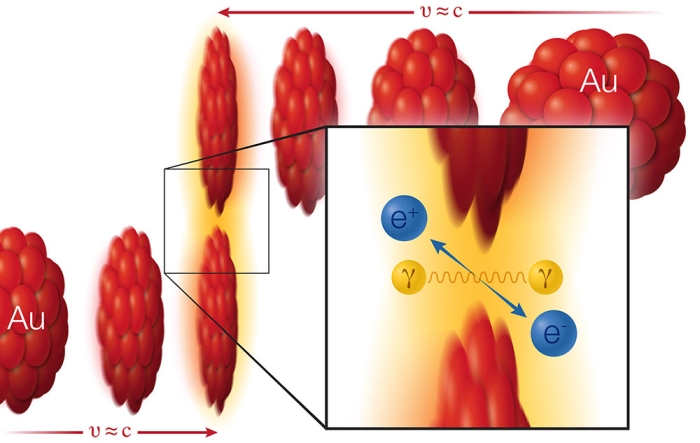 That's because the photons produced by the electromagnetic interaction are virtual photons, popping briefly in and out of existence, and without the same mass as their 'real' counterparts.

To be a true Breit-Wheeler process, two real photons need to collide - not two virtual photons, nor a virtual and a real photon.

At the ions' relativistic speeds, the virtual particles can behave like real photons. Thankfully, there's a way physicists can tell which electron-positron pairs are generated by the Breit-Wheeler process: the angles between the electron and the positron in the pair generated by the collision.

Each type of collision - virtual-virtual, virtual-real and real-real - can be identified based on the angle between the two particles produced. So the researchers detected and analyzed the angles of over 6,000 electron-positron pairs generated during their experiment.

They found that the angles were consistent with collisions between real photons - the Breit-Wheeler process in action.

"We also measured all the energy, mass distributions, and quantum numbers of the systems. They are consistent with theory calculations for what would happen with real photons," said physicist Daniel Brandenburg of Brookhaven Lab.

"Our results provide clear evidence of direct, one-step creation of matter- antimatter pairs from collisions of light as originally predicted by Breit and Wheeler."

The argument could be very reasonably made that we won't have a direct first detection of the pure, single photon-photon Breit-Wheeler process until we collide photons approaching the energy of gamma rays.

Nevertheless, the team's work is highly compelling stuff - at the very least, it shows that we are barking up the right tree with Breit and Wheeler.

We'll be continuing to watch this space, avidly.