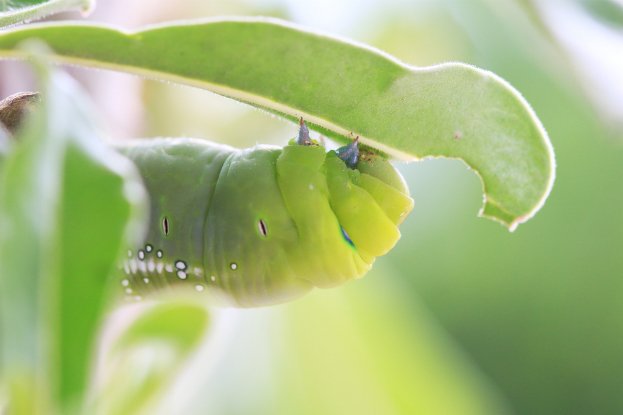 Plants Can "Hear" Themselves Being Eaten

Plants know when they’re being chewed on, researchers have found, and they release defensive chemicals to try to stop it.

It sounds pretty gruesome, but a study released in Oecologia in July by the University of Missouri-Columbia in the US revealed that plants can actually feel the vibrations of something chewing on them, and respond defensively.

It’s still not clear whether this means plants can actually feel the chewing, but it was the first evidence that the munching sounds cause them to react. And we think it would be pretty awful to be able to sense being eaten alive.

As part of the study, the scientists put caterpillars on Arabidopsis thaliana, a small, cabbage-like plant, and then recorded the vibrations made by the caterpillar's chewing. They recorded these tiny vibrations using a special microphone that beams a laser off a reflective surface to see how fast the surface is moving.

They then played back these vibrations to a group of plants who weren't being eaten by caterpillars. A third plant was kept in silence as a control.

In the experiment, plants chewed on by caterpillars and those played the chomping sound released more mustard oil, a chemical that’s meant to fend off pests, than the plants that had been exposed to silence.

Scientists already knew that plants could change their growth pattern in reaction to certain sounds, but this is the first time they saw a plant protecting itself from the sound of a predator’s chewing.

“Our work is the first example of how plants respond to an ecologically relevant vibration. We found that feeding vibrations signal changes in the plant cells' metabolism, creating more defensive chemicals that can repel attacks from caterpillars,” said senior research scientist Heidi Appel in a press release.

Check out the video below to find out more about the discovery - and listen to the disturbing chewing sounds:

And from all of us - sorry, plants.