Scientists have reported finding traces of plastic and hazardous chemicals in Antarctica, which before now was the last part of the planet that remained mostly untouched by the damaging effects of human activity.

Samples of water and snow, collected over a three-month period earlier this year, paint a sorry picture of the environmental consequences of our modern way of life.

In the wake of the new report put together by Greenpeace, one of the most detailed of its kind published so far, environmentalists are calling for drastic action to curb the spread of these pollutants, before they damage the Antarctic ecosystem. 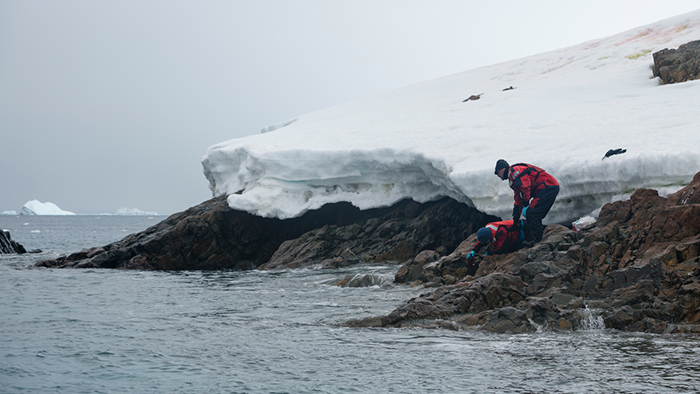 "We may think of the Antarctic as a remote and pristine wilderness," says Frida Bengtsson, from Greenpeace's Protect the Antarctic campaign. "But from pollution and climate change to industrial krill fishing, humanity's footprint is clear."

"These results show that even the most remote habitats of the Antarctic are contaminated with microplastic waste and persistent hazardous chemicals."

Seven out of eight sea-surface water samples tested were found to contain one microplastic element per litre of water, while an additional nine samples collected with a mantra trawl ocean skimming net showed microplastics in two of them.

Meanwhile seven out of nine snow samples showed traces of toxic chemicals associated with human industrial processes and the production of consumer goods, chemicals that are also linked to reproductive and developmental issues in wildlife.

These per- and polyfluorinated alkylated substances, or PFASs, don't occur naturally and degrade very slowly, if at all. The researchers say they seem to have come from recent contaminated rainfall and snowfall, and even the most remote parts of the continent – like Kaiser Island – have been polluted.

Back in 2015, more than 200 scientists signed a petition to call for this type of chemical to be banned from all but the most essential uses. A few years down the line, we're seeing why those experts wanted urgent action taken.

"We also saw all kinds of waste from the fishing industry down in the Antarctic," says Bengtsson. "Buoys, nets and tarpaulins drifted in between icebergs, which was really sad to see."

"We took them out of the water, but it really made clear to me how we need to put vast parts of this area off-limits to human activity if we're going to protect the Antarctic's incredible wildlife."

There's actually very little data about plastics in Antarctica at the moment, making this a valuable study for conservationists looking to protect this beautiful and remote wilderness for future generations.

We already know that we're reaching breaking point when it comes to our use of plastics, a substance that doesn't degrade naturally and which simply builds and builds until it blights the landscape and harms the animals we share the planet with.

And with Antarctica suffering from increasing global temperatures too, it's a sober reminder that our everyday actions have an impact in some of the most remote parts of the world, not just our local neighbourhoods.

We can only hope that this latest Greenpeace report adds to the international pressure to take greater responsibility for the planet.

The researchers behind it want to set up an Antarctic Ocean Sanctuary, some 1.8 million square kilometres (about 695,000 square miles) in size, where whales, penguins and other marine life can flourish in protected waters. A decision is being taken on the proposed sanctuary in October.

"We need action at source, to stop these pollutants ending up in the Antarctic in the first place," says Bengtsson, "and we need an Antarctic Ocean Sanctuary to give space for penguins, whales and the entire ecosystem to recover from the pressures they're facing."

You can read the Greenpeace report in full online.