Eerie Remains of a 2,000-Year-Old Horse Have Been Discovered in Pompeii

An amazing new discovery has been made in the ancient Roman city of Pompeii: the remains of a stable, complete with the remains of a dead horse, which died 2,000 years ago when the city was swallowed by the ash of an erupting volcano.

The discovery was made by archaeologists, but what led them to it is disturbing. It was found in a large villa in Civita Giuliana, a suburb of Pompeii north of the city walls - because looters had dug a 60-metre (196-foot) network of tunnels underneath the villa in their hunt for lost treasures.

The site was excavated to stop the tunneling and preserve the heritage of the site before it could be completely ransacked.

In 79 CE, the extraordinarily violent volcanic eruption of the volcano Vesuvius rained down ash and pumice on the city of Pompeii, burying sections of the city in material as deep as 2.5-3 metres (8-10 feet).

It's possible that the residents who had not already evacuated had already been killed by the extreme heat of a pyroclastic surge, but the falling material buried their bodies, preserving their moments of death for millennia.

Of course the bodies are no longer there, having long since decomposed, but they left cavities - and skeletons - in the material that had settled around them.

By pouring plaster into these cavities like a mould - a technique called the Fiorelli process - archaeologists have been able to take impressions of these bodies; and they can then CT scan these plaster casts for more information about the bones inside. 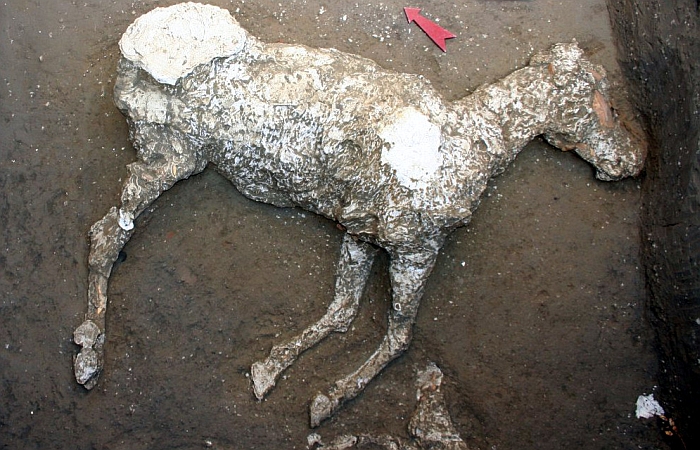 This is what archaeologists did to the horse, one of the few animals that have undergone the process. And they learned a few things about it too.

It was small compared to today's horses, standing just 150 centimetres (around 60 inches) at the withers. But this isn't unusual for the time, the archaeologists said.

"We must bear in mind that the ancient horses were probably smaller than the current ones," authorities wrote in a report describing the horse.

"The horse of Civita Giuliana has considerable dimensions, for the time, which could suggest the existence of highly selected individuals in the area of ​​Pompeii in 79 [CE]."

The area contained a trough, and other evidence that indicated that the horse was a valuable one: the remains of a harness made from iron and bronze, found near the animal's head.

A second horse was also discovered, but a landslide had partially destroyed the cavity, making a complete plaster cast impossible.

They also note that, although further analysis is required to confirm that the animal is indeed a horse, as opposed to a mule or donkey, both of which have previously been found in Pompeii, they already have a pretty good clue. From where it was laying on the ground, it left an impression of its left ear, which is consistent with a horse.

At the time, equine livestock was divided into three categories, according to ancient Roman agricultural writer Columella. The most noble category was horses bred for competition and show, such as races, circuses and parades. This was followed by mules, and then the "vulgar race."

By virtue of its valuable harness, the imprint of its ear indicating that it was indeed a horse, and its size, which was large for the time, the researchers have hypothesised that the animal was one of the most noble category.

The excavation turned up some other finds too - kitchen utensils, amphora shards, even part of a wooden bed that had been buried beneath the volcanic ash.

The archaeologists plan to scan the plaster cast of the horse to learn more about it based on its skeleton, such as its age and its health status at time of death. And authorities are continuing to look for the looters, who have been ransacking the area for some time.