For The First Time, a Portable Atomic Clock Has Been Used to Measure Gravity

Atomic clocks are capable of the most precise physical measurements humanity can make, but because they're so complex, they've been restricted to laboratory use - until now.

For the first time, scientists have developed a portable version, and used it to take measurements of gravity outside a laboratory setting.

The technology involved in atomic clocks is breathtaking. They keep track of the extremely regular oscillation of atoms trapped by lasers to keep the most accurate time possible, allowing it to be measured to the 18th decimal place.

The most accurate atomic clock ever built using strontium atoms contained in a lattice of lasers - what is known as an optical lattice atomic clock - won't lose or gain a second for 15 billion years. That's longer than the current age of the Universe.

The strontium atoms are cooled to a temperature just above that of absolute zero, trapped by the interference pattern of two laser beams. The laser excites the atom, which causes it to oscillate.

The new portable atomic clock, also a strontium optical lattice developed by researchers at the Physikalisch-Technische Bundesanstal in Germany, is not quite as accurate as the 2015 record-breaker. It has an uncertainty of 7.4 × 10−17.

But it's accurate enough to measure gravitational redshift, as the international team of researchers has just discovered.

We know that gravity affects matter. We know that it affects light. And, yes, it also has an effect on time - where gravity is stronger, time moves slower.

You wouldn't be able to detect this with a regular timepiece on Earth, but atomic clocks are so precise that they can be used to measure this effect.

This field is called relativistic geodesy, because, surprise, it was predicted by Einstein's theory of general relativity. 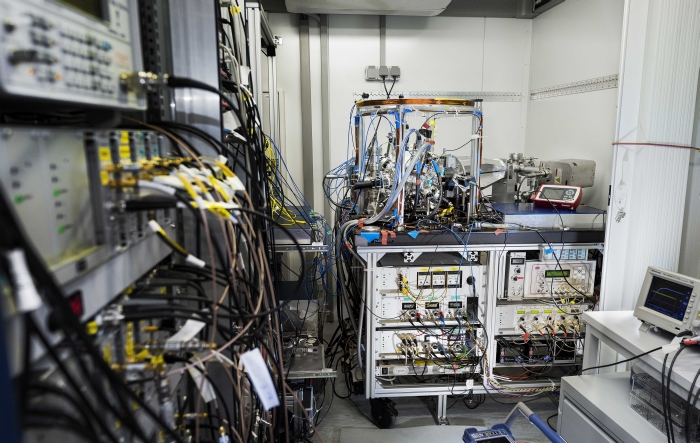 The atomic clock inside its trailer. (Physikalisch-Technische Bundesanstalt)

The team drove the clock in a temperature-stabilised and vibration-dampened trailer to the French Modane Underground Laboratory, and compared the measurements they took with measurements taken at the Istituto Nazionale di Ricerca Metrologica in Torino, 90 kilometres away and at a height difference of 1,000 metres (3,280 feet).

An optical fibre link and frequency combs allowed the two clocks to be connected and their readings compared accurately.

Meanwhile, measurements were also taken using a cryogenic caesium fountain clock and an ytterbium optical lattice clock. And the researchers then drove the portable clock to Torino to check it against measurements at that location.

The measurements were consistent, but the clock does still need a little bit of work, wrote Andrew Ludlow of the National Institute of Standards and Technology, who did not participate in the research.

"As would be expected for this type of pioneering effort, the measurement campaign was not perfect," he wrote in a related editorial for Nature Physics.

"There were periods of time when the portable optical clock would not function, and the accuracy of the measurements were limited below the capability of optical clocks.

Nevertheless, the experiment did prove the principle, representing a significant milestone towards portable atomic clocks.

In the future, these could be used in much more flexible ways than the current laboratory-bound atomic clocks.

"Optical clocks are deemed to be the next generation atomic clocks - operating not only in laboratories but also as mobile precision instruments," said Christian Lisdat of the Physikalisch-Technische Bundesanstalt.

"This cooperation proves again how disciplines such as physics or metrology, geodesy and climate impact research can mutually benefit each other."

The team's paper has been published in the journal Nature Physics.