The largest shark ever to swim Earth's oceans is like a ghost in the paleontological record.

Megalodon (Otodus megalodon) is known primarily in the fossil record by its giant teeth, surviving millions of years, long after its cartilage skeleton decays to nothing. It's from these giant teeth, as big as your hand, that scientists estimate the size of the giant beast, with a jaw you could easily stand inside, with room to spare.

Gauging the size of a shark from teeth (and a few vertebrae), however, is not an exact science, especially an extinct one that may have been built differently from modern sharks, which, after all, display a range of morphologies. Estimates of the megalodon's size have ranged from around 11 meters to over 40 meters (36 to 131 feet) in length, but generally settling somewhere around 15 to 18 meters.

A new method of calculating the megalodon's size based on the width of its teeth suggests that these numbers are an underestimation - that the giant shark's true size hovered somewhere around 20 meters (65 feet) in length. And it was a chance discovery, made with the help of students, that figured it out. 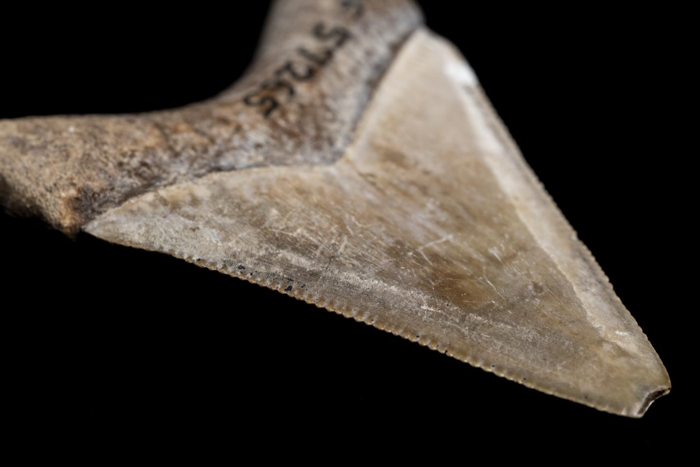 "I was quite surprised that indeed no one had thought of this before," said paleontologist Ronny Maik Leder of the Natural History Museum in Germany.

"The simple beauty of this method must have been too obvious to be seen. Our model was much more stable than previous approaches. This collaboration was a wonderful example of why working with amateur and hobby paleontologists is so important."

Although megalodon skeletons may be absent from the fossil record, teeth are plentiful. The giant beasts lived from 23 million to around 3.6 million years ago, dominating the ocean.

Sharks continuously shed and regrow teeth for their entire lives - going through up to 40,000 teeth before they die. A megalodon had up to 276 teeth in its mouth at any given time. That's a lot of teeth.

To estimate the size of the shark, scientists commonly use equations based on tooth length. You need to work out where in the shark's mouth the tooth would have been, then use an equation for that position.

However, the donation of a nearly complete set of megalodon teeth to the Florida Museum of Natural History in 2015 removed a lot of the positioning guesswork.

Paleontologist Victor Perez, formerly of the Florida Museum of Natural History and now of the Calvert Marine Museum, was performing this task with students, using 3D-printed replicas of megalodon teeth from the set, when something wasn't working.

The students' calculations ranged between 12 and 45 meters for the same shark, based on the distance from the front of the jaw.

"I was going around, checking, like, did you use the wrong equation? Did you forget to convert your units?" Perez said. "But it very quickly became clear that it was not the students that had made the error. It was simply that the equations were not as accurate as we had predicted."

It was French amateur paleontologist Teddy Badaut who came up with a solution. Since the width of a shark's tooth is limited by the size of a shark's jaw, and the size of the jaw may be proportional to the shark's body length, why not try basing estimates on the tooth width instead of length?

So, Perez and Leder devised a new set of equations, along with a model for estimating jaw width based on the relationship between a tooth's width and the width of the jaw.

They applied these to the megalodon teeth from the Florida Museum set, and to sets of teeth from several other shark species. This gave them the revised length estimate - as well as a tool for estimating a megalodon's size based on just a single tooth.

It's still not perfect, though. Some sharks' teeth are closer together than other sharks', and we don't have that information for the megalodon. But the new research does, perhaps, bring us a little bit closer to gauging the true size of this fearsome, ancient predator.

"Even though this potentially advances our understanding, we haven't really settled the question of how big megalodon was," Perez said. "There's still more that could be done, but that would probably require finding a complete skeleton at this point."

The research has been published in Palaeontologia Electronica.