At least a dozen cases of eastern equine encephalitis, a dangerous mosquito-borne illness, have been confirmed across the US so far this season. Two people have died from the disease.

EEE, or "triple E", is a rare but life-threatening virus that can wreak havoc in livestock and cause permanent brain damage in people, resulting in seizures, mental impairment, and even personality changes in survivors of the disease.

EEE is incurable, but its symptoms can be successfully treated if it's caught before it spreads to the brain. About a third of patients with EEE die, either within weeks of getting this disease or years later as a result of ongoing physical and mental impairment.

Triple E is most often found in the northeastern United States in swampy, wooded areas from late spring to early fall. It can also be found in southern states into the winter months.

EEE infections this year are already beyond the typical five to 10 human cases per season. Here's what we know about the places that are affected, and how residents can stay safe.

Massachusetts has reported seven humans cases of EEE, and one woman has died

Seven people in Massachusetts have been confirmed to have EEE this season.

The most recent cases are a 5-year-old girl from Sudbury, who is in critical condition, and a woman in her 60s from Northborough,Boston.com reported.

In late August, a 59-year-old woman died after contracting EEE, according to NBC 10. An autopsy is being performed to confirm the cause of death.

Other cases included two men over 60 years old and one man between 19 and 30. Another man, in his 70s, was diagnosed in early September, according to Boston 25 News.

The first case was confirmed in early August, which was also the first human case off EEE in Massachusetts since 2013, CNN reported.

Following the infections, a growing number of communities have been declared at risk: 36 communities in the state were deemed a critical EEE risk, 42 at high risk, and more than 70 at moderate risk, according to the state Department of Health as of September 9.

Curfews have been implemented in the affected communities to reduce the spread of the disease, since mosquitos are most active from dusk to dawn. 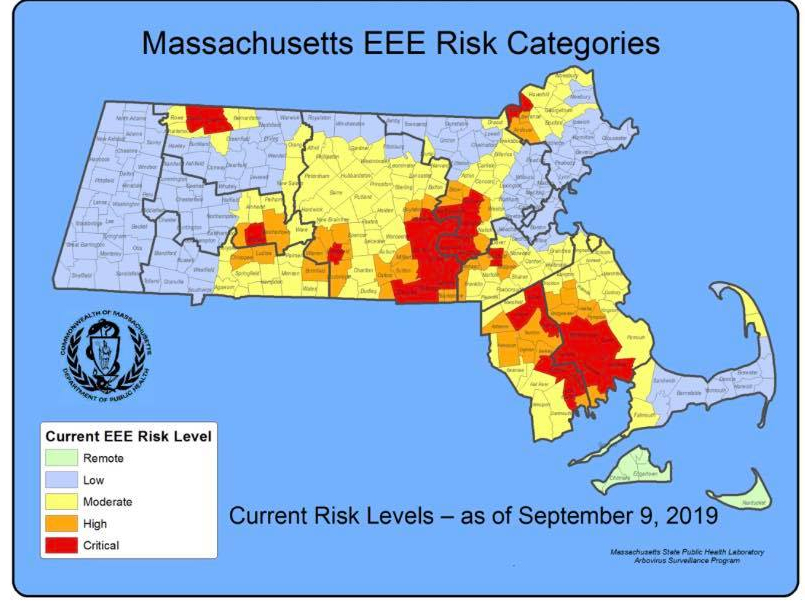 At least three people have been sickened in Michigan, and one has died

A resident of Kalamazoo County became the first fatal case of EEE in Michigan this season, a local news outlet reported.

Health officials have not released any details about the deceased person, who was one of three confirmed cases of EEE in the state.

The other case in Kalamazoo county is 14-year-old girl who was put on a ventilator after contracting EEE, a local news station reported on August 27. A Facebook page created by the girl's parents noted September 8 that she is "comfortable" and preparing to start therapy.

The third confirmed case is of a resident in Berrien County, according to local news.

Up to four other illnesses are suspected to be EEE related by state health officials, but have not been confirmed, WZZM 13 reported.

At least eight horses have also been sicked in the state this season, according to state officials, and at least six have died.

One person has been diagnosed in New Jersey, and horses there with the disease have been euthanised

The New Jersey Department of Health reported that an elderly Somerset man has been diagnosed with the virus, the state's first human case of EEE this season.

At least 10 horses have been euthanised after an EEE diagnosis in the state, according to Equine Management, including in Morris, Salem, Ocean, Atlantic counties.

More mosquitos have tested positive for EEE in New Jersey this season than any year since 2013, and there are still about 10 weeks left in the season, per CDC data.

One human case has been reported in Rhode Island

An elderly man in West Warwick was diagnosed with EEE in late August, the first human case in that state since 2010, the Providence Journal reported.

At least four horses have also contracted the disease, according to local news.

Indiana has detected EEE in horses

EEE was confirmed in at least two horses in Indiana in late August, according to the state veterinarian.

The cases were both from Elkhart County. The surrounding area, including LaGrange, LaPorte, and St. Joseph, is believed to be at risk.

Ohio has at least one confirmed equine case

A horse in Ashtabula County was confirmed to have EEE, according to a news release from the State Department of Agriculture, August 30.

York County, Maine, has reported at least one equine infection

Maine also confirmed EEE was in the state after a horse was confirmed to have EEE in late August in York County. Health officials noted the state and surrounding area has seen an increase in mosquito activity and EEE risk this season.

New Hampshire reported a case of fatal EEE in a horse in Northwood, according to an August 28 news release from the state Health and Human Services Department.

In New York, Oswego County officials said EEE was discovered in two mosquito pools from a swamp about 20 miles north of Syracuse in a town called West Monroe, according to syracuse.com.

Since then, a total of four horses in the state have died from the virus this season, the site reported.

The last human case of EEE in New York was reported in 2011, according to the state Department of Health.

Across Delaware, sentinel chickens (used to monitor for mosquito-borne illnesses) have tested positive for EEE, according to Delaware Online.

The cases were reported in New Castle County, east-central Kent County, and southeastern Sussex County, according to state officials.

Mosquitos with EEE have been in Florida since July

On July 25, Orange County, Florida, officials warned the public about an increase in mosquito activity and said that chickens in the area had tested positive for EEE, according to a press release.

The Connecticut communities of Chester, Haddam, Hampton, North Stonington, Stonington, and Voluntown were all found to have mosquitos that tested positive for EEE, NBC Connecticut reported.

Killingworth was declared at particularly high risk after mosquitos with EEE were found to be concentrated in that area, according to NBC.

To best protect yourself from EEE, use bug spray and and long sleeves and pants while outside

Anyone can get the EEE, but people who work outside are particularly likely to be bitten by mosquitos, and children and the elderly are most likely to have severe cases of EEE.

You can prevent all mosquito-borne illnesses by using effective bug spray (with DEET or lemon eucalyptus) while outside, and wearing long pants and sleeves, according to the CDC.

Also make sure your screens don't have any holes or tears so that they keep mosquitos outside.