The Pupil in Your Eye Can Perceive Numerical Information, Not Just Light

You might know that the size of the pupils in our eyes changes depending on how well lit our environment is, but there's more to the story: Scientists have now discovered that the pupil also shifts in size depending on how many objects we're observing.

The more objects in a scene, the bigger the pupil grows, as if to better accommodate everything that it has to look at. This "perceived numerosity" is a simple and automatic reflex, the new research shows.

In a new study, researchers observed the pupil sizes of 16 participants while they looked at pictures of dots. In some of the pictures, the dots were linked together in dumbbell shapes – creating the illusion that there were fewer objects – and pupil size then shrank. 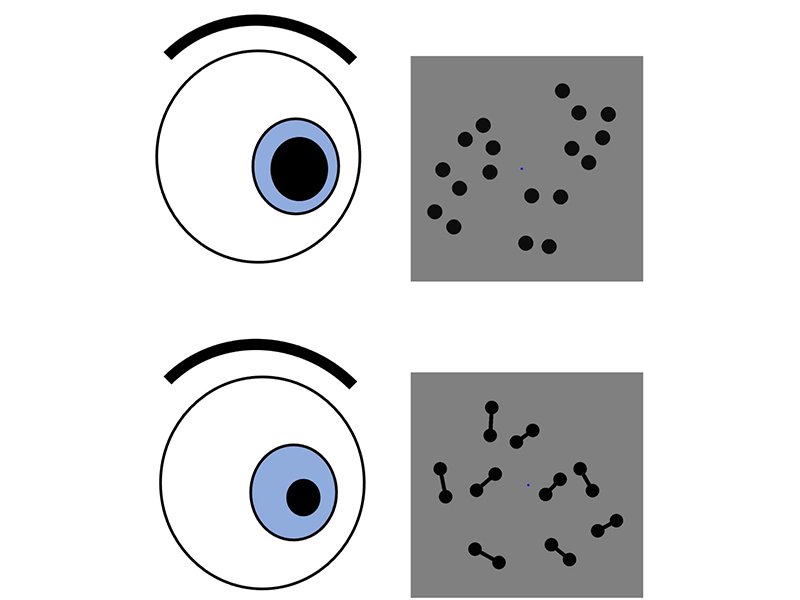 "This result shows that numerical information is intrinsically related to perception," says psychologist and neuroscientist Elisa Castaldi from the University of Florence in Italy.

"This could have important, practical implications. For example, this ability is compromised in dyscalculia which is a dysfunction in mathematical learning, so our experiment may be useful in early identification of this condition in very young children."

Even though the numbers of black or white dots in the pictures being viewed didn't change, the perceived number of objects did, because of the joining lines. The participants were asked to look at these images passively, without paying special attention to the overall number of items and without a specific task to complete.

As for where this reaction comes from, it's likely to be linked to the need for survival – most species are thought to have a dedicated 'number sense' that enables them to spot enemies in the wild, find food, get back home, and more besides.

When it comes to humans, being able to weigh up numbers is something that seems to appear as soon as a few hours after birth – even if you're terrible at math, you have a built-in aptitude for judging numerosity, and it appears the dilation of our pupils is part of a response to that.

"When we look around, we spontaneously perceive the form, size, movement and color of a scene," says psychologist David Burr from the University of Sydney in Australia, and also affiliated with the University of Florence.

"Equally spontaneously, we perceive the number of items before us. This ability, shared with most other animals, is an evolutionary fundamental: it reveals immediately important quantities, such as how many apples there are on the tree, or how many enemies are attacking."

Previous research had indicated that pupil size wasn't just affected by light: visual illusions involving brightness, size, and context have an effect too, backing up the idea that this dilation in our eyes is at least partly controlled by signals higher up in the brain.

The researchers are keen to dig further into why this is happening, and what else could be having an impact on pupil size – such as the movement required by the eye to take in everything that appears in a scene.

And there's lots more to explore here as well. Our eyes seem to be more sensitive to the number of items we're looking at rather than how they're spaced or arranged, which is another reaction that can be analyzed in future studies.

"Recent research from our laboratory shows that pupil size is also regulated by cognitive and perceptual factors," says physiologist Paola Binda from the University of Pisa in Italy.