NASA and China plan to mount crewed missions to Mars in the next decade. While this represents a tremendous leap in terms of space exploration, it also presents significant logistical and technological challenges.

For starters, missions can only launch for Mars every 26 months when our two planets are at the closest points in their orbit to each other (during an "Opposition"). Using current technology, it would take six to nine months to transit from Earth to Mars.

Even with nuclear-thermal or nuclear-electric propulsion (NTP/NEP), a one-way transit could take 100 days to reach Mars.

However, a team of researchers from Montreal's McGill University assessed the potential of a laser-thermal propulsion system. According to their study, a spacecraft that relies on a novel propulsion system – where lasers are used to heat hydrogen fuel – could reduce transit times to Mars to just 45 days! 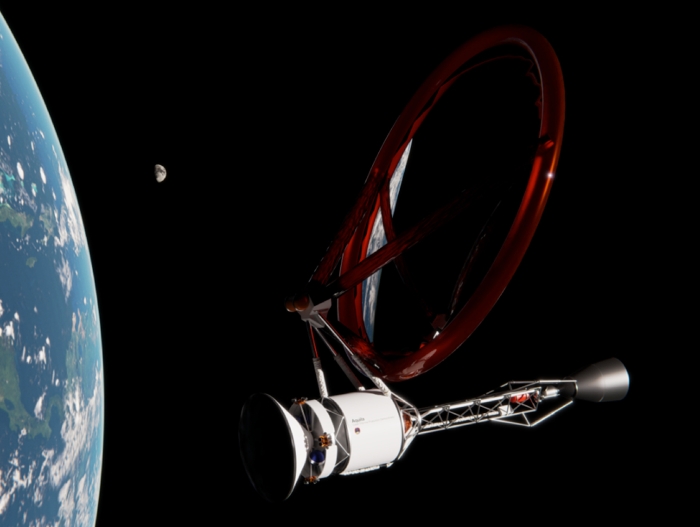 The research was led by Emmanuel Duplay, a McGill graduate and current MSc Aerospace Engineering student at TU Delft. He was joined by Associate Professor Andrew Higgins and multiple researchers with the Department of Mechanical Engineering at McGill University.

Their study, titled "Design of a rapid transit to Mars mission using laser-thermal propulsion", was recently submitted to the journal Astronomy & Astronomy.

In recent years, directed-energy (DE) propulsion has been the subject of considerable research and interest. Examples include the Starlight program – also known as the Directed Energy Propulsion for Interstellar Exploration (DEEP-IN) and Directed Energy Interstellar Studies (DEIS) programs – developed by Prof. Phillip Lubin and the UCSB Experimental Cosmology Group (ECG).

As part of NASA-funded research that began in 2009, these programs aim to adapt large-scale DE applications for interstellar missions.

There's also Breakthrough Starshot and Project Dragonfly, both of which emerged from a design study hosted by the Initiative for Interstellar Studies (i4iS) in 2013. These concepts call for a gigawatt-power laser array to accelerate a lightsail and a small spacecraft to a fraction of the speed of light (aka relativistic speeds) to reach nearby star systems in decades, rather than centuries or millennia.

But whereas these concepts are interstellar in focus, Duplay and his colleagues explored the possibility of an interplanetary concept.

As Duplay explained to Universe Today via email:

"The ultimate application of directed-energy propulsion would be to propel a lightsail to the stars for true interstellar travel, a possibility that motivated our team that did this study. We were interested in how the same laser technology could be used for rapid transit in the Solar System, which will hopefully be a nearer-term stepping stone that can demonstrate the technology."

Aside from laser sail propulsion, DE is being explored for several other space exploration applications. This includes power beaming to and from spacecraft and permanently-shadowed habitats (e.g., the Artemis Program), communications, asteroid defense, and the search for possible technosignatures.

There's also a concept for a laser-electric spacecraft being investigated by NASA and as part of a collaborative study between the UCSB ECG and MIT.

For this application, lasers are used to deliver power to photovoltaic arrays on a spacecraft, which is converted to electricity to power a Hall-Effect Thruster (ion engine). This idea is similar to a nuclear-electric propulsion (NEP) system, where a laser array takes the place of a nuclear reactor. As Duplay explained, their concept is related but different:

"Our approach is complimentary to these concepts, in that it uses the same phased-array laser concept, but would use a much more intense laser flux on the spacecraft to directly heat propellant, similar to a giant steam kettle. This permits the spacecraft to accelerate rapidly while it is still near Earth, so the laser does not need to focus as far into space.

"Our spacecraft is like a dragster that accelerates very quickly while still near Earth. We believe we can even use the same laser-powered rocket engine to bring the booster back into Earth orbit, after it has thrown the main vehicle to Mars, enabling it to be quickly recycled for the next launch."

In this respect, the concept proposed by Duplay and his colleagues is akin to a nuclear-thermal propulsion (NTP) system, where the laser has taken the place of a nuclear reactor.

In addition to DE and hydrogen propellant, the mission architecture for a laser-thermal spacecraft includes several technologies from other architectures. As Duplay indicated, they include:

"[A]rrays of fiber-optic lasers that act as a single optical element, inflatable space structures that can be used to focus the laser beam when it arrives at the spacecraft into the heating chamber, and the development of high-temperature materials that allow the spacecraft to break against the Martian atmosphere upon arrival."

This last element is essential given that there's no laser array at Mars to decelerate the spacecraft once it reaches Mars.

"The inflatable reflector is a key from other directed-energy architectures: designed to be highly reflective, it can sustain a greater laser power per unit area than a photovoltaic panel, making this mission feasible with a modest laser array size compared to laser-electric propulsion," added Duplay.

By combining these elements, a laser-thermal rocket could enable very fast transits to Mars that would be as short as six weeks – something that was considered possible only with nuclear-powered rocket engines before.

The most immediate benefit is that it presents a solution to the hazards of deep-space transits, like prolonged exposure to radiation and microgravity.

At the same time, says Duplay, the mission presents some hurdles since many of the technologies involved are bleeding-edge and have not been tested just yet:

"The laser heating chamber is likely the most significant challenge: Can we contain hydrogen gas, our propellant, as it is being heated by the laser beam to temperatures greater than 10,000 K while at the same time keeping walls of the chamber cool? Our models say this is feasible, but experimental testing at full scale is not possible at present because we have not yet built the 100 MW lasers needed."

While much of the technology in this proposed mission architecture – and other similar proposals – is still in the theory and development phase, there is no doubt about their potential.

Reducing the time it takes to get to Mars to a matter of weeks instead of months will address two of the biggest challenges for Mars missions – logistical and health considerations.

Furthermore, establishing a rapid-transit system between Earth and Mars will speed the creation of infrastructure between Earth and Mars. This could include a Gateway-like space station in orbit of Mars, like the Mars Base Camp proposed by Lockheed Martin, as well as a laser array to decelerate incoming spacecraft.

The presence of these facilities would also accelerate plans to create a permanent human presence on the surface.

"The Mars-in–45-days design study that Emmanuel led was motivated by exploring other, near-term applications of the phased array laser technology that Philip Lubin's group is developing. The ability to deliver energy deep into space via laser would be a disruptive technology for propulsion and power. Our study examined the laser thermal approach, which looks encouraging, but the laser technology itself is the real game changer."