Researchers have completed the world's first scan of a living cell membrane down to a nanoscale level, revealing details that could finally resolve a longstanding debate on how they function.

The technique used to create this incredible image could fundamentally change how nanoscale structures are studied in living things.

The research was carried out by a team of scientists from Oak Ridge National Laboratory in Tennessee, who used a mix of genetic and chemical labelling techniques to add an isotope of hydrogen to the membranes of living Bacillus subtilis cells.

Membranes of all living cells are made up of thin layers of fat molecules, or lipids, which support a variety of other organic materials such as protein channels and chains of carbohydrates.

The basic concept is the lipids form a barrier between the wet bits inside a cell and the wet bits outside a cell. Proteins usually make up structures such as gates to control what goes in and what goes out, and other chemicals, such as the carbohydrates, act as identification tags.

While it seems simple enough, there has been a debate in cytology over the existence of something called a lipid raft.

These are sections of membrane that operate as distinct domains, making the membrane of a cell act a bit like a wobbly jigsaw puzzle.

It's hypothesised that movements of these lipid rafts can act as an extra control mechanism for the cell by shifting proteins in and out of action.

"It became a debate," says lead researcher John Katsaras. "Some people believed they exist, while others believed they didn't. There was a lot of circumstantial evidence that could support either side."

Cell structures are often analysed using fluorescent labels that seek out a particular molecule and tag it, making it easy to spot using a light microscope.

Unfortunately, there is no clear way to define where a lipid raft starts or stops, and even if there was, they're predicted to be too small to be resolved by a light microscope.

Using an electron microscope might give better resolution, but the cell won't be functional while it's being observed.

To build a clearer picture, the Oak Ridge National Laboratory team used a technique called neutron scattering to resolve subtle differences in the arrangement of molecules in the cell membrane of a bacterium.

Not only did this give a nanoscale resolution, it could do so without disrupting the membrane's functions, allowing them to build a highly detailed picture of the cell's outer layers without destroying it.

But they still had a couple of challenges to overcome - for one thing, while a low energy scattering of neutrons isn't necessarily deadly to the bacteria, they can still interfere with biological processes.

Second, neutrons were good at telling different sections apart, but to address the lipid raft question, they needed to be able to distinguish different fat molecules.

That's where the isotopes come in.

The nucleus of 99.98 percent of all hydrogen atoms in the Universe are nothing more than a single proton. A tiny fraction of a percent of hydrogen atoms come with a neutron attached, in which case, we call it deuterium.

While both hydrogen and deuterium do the same job in the molecules that make up our cells, they scatter neutrons in slightly different ways.

The researchers created a strain of B. subtilis that would arrange lipids of slightly different proportions of hydrogen and deuterium into its membrane.

If the lipid raft hypothesis didn't hold water, they expected to see a uniform arrangement of fat molecules.

Instead, they saw distinct differences in how the lipids were arranged into regions that matched the expected size of the hypothetical domains.

While this distinction isn't visible in the model below, it does give you an idea of how the bacterium cell is structured, with the gooey cytoplasm bits below, the lipid layer of the membrane the researchers were investigating in the middle, and its rigid cell wall at the very top. 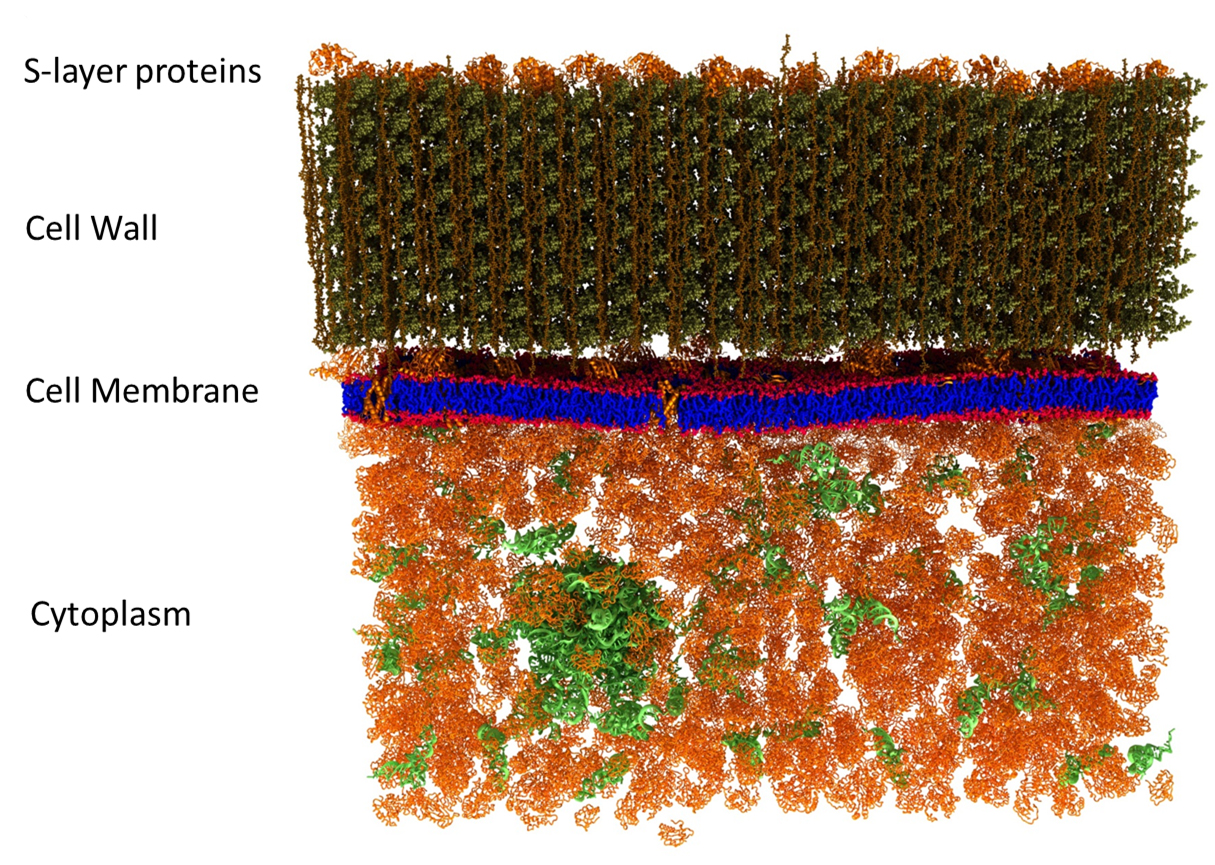 The team says the technique of using deuterium and neutron scattering in living cells could be used to fundamentally change how nanoscale structures are studied in living things.

"The people who study these things tend to use particular types of probes," says Katsaras.

"They didn't use neutron scattering because it wasn't in the biologist's wheelhouse. Our novel experimental approach opens up new areas of research."

From microscopes to DNA probes, innovations like this have provided us with new perspectives on life throughout history. Who knows what stunning sights will be revealed by this new process?

These results were published in PLOS Biology.