Astronomers have created the most comprehensive map yet of all the dark matter in the universe.

That's no easy feat, considering dark matter is invisible. Scientists know this shadowy cousin of regular matter exists, though, because its strong gravitational forces can pull entire galaxies together.

Based on observations of its influence, astronomers estimate that dark matter makes up one-quarter of the universe.

The new map is the product of years of work by a group of 400 scientists from seven countries, known as the Dark Energy Survey (DES).

They pointed the Victor M. Blanco Telescope in Chile skyward to peek at millions of galaxies bound together by dark matter. The distribution of those galaxies, and the ways in which light from them reaches Earth, can inform astronomers about how much dark matter sits between those galaxies and our planet.

In a series of studies published this week, the team showed that the universe is peppered with giant clusters of galaxies bunched together – regions where dark matter, too, is densely packed.

But their map, which covers about one-eighth of the sky as seen from Earth, also documents patches of the universe that are nearly devoid of both dark matter and galaxies.

These cluttered and empty areas appear to be connected by interstellar gas in a cosmic web.

"It shows us new parts of the universe that we've never seen before. We can really see this cosmic web structure, including these enormous structures called cosmic voids, which are very low-density regions of the universe where there are very few galaxies and less matter," Niall Jeffrey, a cosmologist at University College London, told the Guardian.

The photo below shows a section of the new map; the voids are in black, while the galaxy clusters are bright orange. 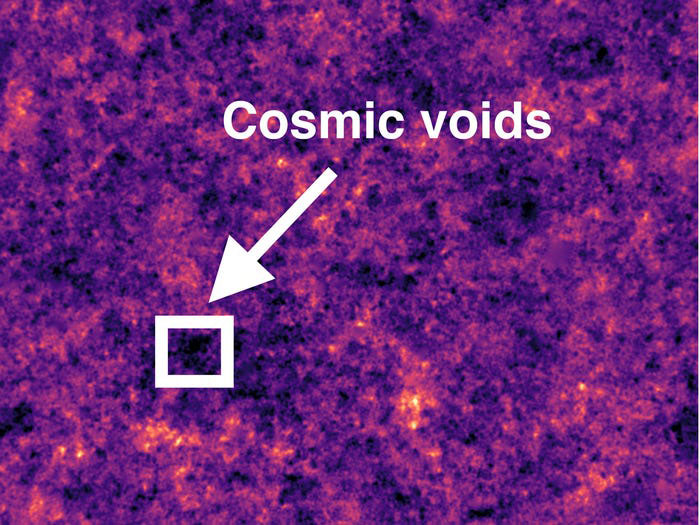 According to Jeffrey, the new findings suggest that gravity may not work the same way in these voids as it does on Earth, which would mean the standard laws of physics do not apply.

While dark matter is unobservable, the force it exerts on other things in the universe helps scientists detect it.

Dark matter bends light coming toward Earth from other galaxies, a bit like a kaleidoscope. So by measuring the intensity of that distortion, astronomers can calculate how much dark matter sits between us and another galaxy, and how smushed together that dark matter is.

If a galaxy's light is very distorted, it suggests the invisible dark matter obscuring it from view is densely clumped.

Above: The DES dark matter map (in purple) superimposed on an image of the Milky Way galaxy.

So Jeffrey and his team looked at how light from more than 226 million galaxies, both nearby and billions of miles away, was getting distorted.

They used the telescope to capture images of those galaxies for 345 nights between 2013 and 2016, then relied on an artificial-intelligence program to translate those observations into their detailed map of dark matter.

The team collected data on another 413 nights before the survey ended 2019, so DES scientists plan to create an even larger, more detailed dark-matter map using the rest of their observations.

According to Albert Einstein's theory of relativity, gravity should have caused chunks of matter in the universe to clump up in a predictable way after the Big Bang some 13 billion years ago.

But according to Jeffrey, the DES map suggests Einstein's theory may have missed the mark to some degree.

"If you look out into the universe, the matter isn't as clumpy as expected – there are hints that it is smoother," Jeffrey told the Guardian.

"It may seem a relatively small thing," he added, "but if these hints are true, then it may mean there's something wrong with Einstein's theory of general relativity, one of the great pillars of physics."