Whale sharks, the majestic creatures that also happen to be the world's largest fish, are far more gentle than the name suggests. They swim lazily around tropical waters, filter-feeding on plankton.

Now, biologists have discovered the enigmatic giants have a curious trick up their sleeve – teeth-like scales adorning their eyeballs. It appears to be the whale sharks' version of eyelids, and one we haven't seen in any other vertebrate.

"Eyeballs face a potential risk of damage from mechanical, chemical and biological hazards," the researchers write in a new paper describing the find.

"This report elaborates on adaptations of the eyes of the whale shark (Rhincodon typus), including the discovery that they are covered with dermal denticles, which is a novel mechanism of eye protection in vertebrates."

Dermal denticles, also known as placoid scales, are the tiny tough scales that cover sharks and rays. But although they are scales as we think of them, they're also structurally very similar to teeth, and include an inner core of pulp, a middle layer of dentine or bony tissue, and a hard enamel-like coating on top.

We already knew that many sharks - including whale sharks - are covered with these denticles. However, finding them on the eyeballs of these fish is quite the surprise. 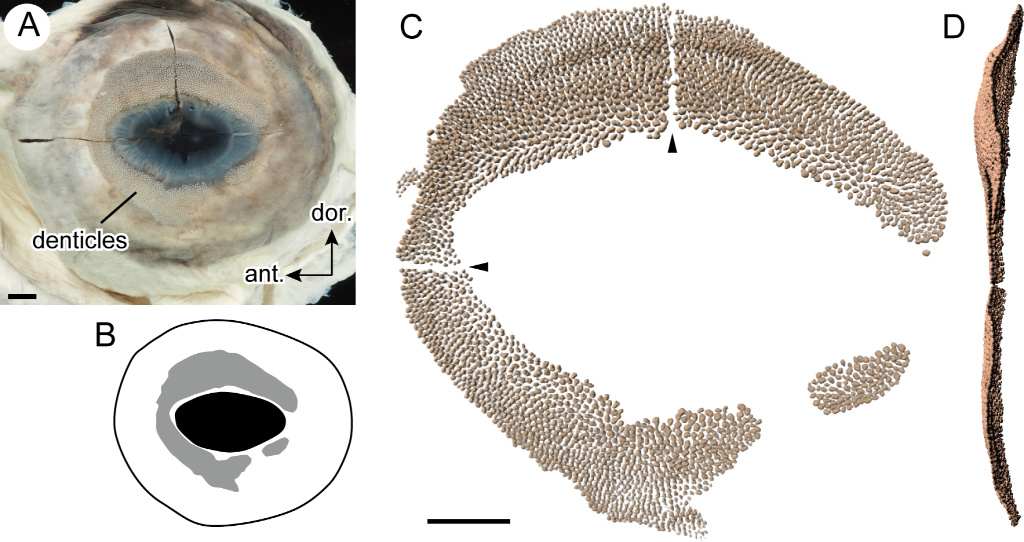 That's partially because it's long been assumed whale sharks don't have to use their sense of sight much: their eyes are incredibly small compared to the rest of their body, and they don't have a lot of midbrain, the part of the brain that processes vision.

"However, the highly protected features of the whale shark eye, in contrast to the traditional view, seems to suggest the importance of vision in this species," the team argues in their study.

Researchers took a CT scanner to a preserved whale shark eyeball, as well as taking ultrasounds of two captive live whale sharks at the Okinawa Churaumi Aquarium in Japan. 3D rendering of the morphology of each eye denticle. (Tomita et al., PLOS One, 2020)

As well as discovering the eye denticles, the researchers also elaborated on the mechanisms whale sharks use to retract their eyes back into their head. Most of the time this can be for just a short period of time, however not always. Once, a particularly unfortunate shark ended up with its eyes retracted for 10 days after it was transferred to a new aquarium from Taiwan to Atlanta, Georgia.

"It is likely that whale sharks maintain their vision during eye retraction because the pupils of the whale sharks in this study were not completely covered with surrounding white tissues when their eyes had retracted, though their visual field would be much more restricted than when their eyes are positioned normally," explain the researchers.

"In fact, the animal that kept its eyes retracted for approximately 10 days at the Georgia Aquarium appeared to have no problem navigating the exhibit space, until its eyes returned to their normal positions suddenly and, apparently, spontaneously."

So, while whale sharks aren't exactly a fearsome predator of the ocean, these two eye-protecting features are a fearsome competitor to… eyelids.