When a human looks at a distant skyscraper, it appears small to the eye. It's a visual illusion, and we use other contextual information to know the building is actually tall.

Our new study shows, for the first time, that honeybees see size-based visual illusions too. Whether a size illusion is seen, or not, depends on how a target object is viewed.

These new results help us understand how visual illusions evolved in different species over time.

Humans see lots of different illusions such as mirages, illusions of shape, length, size, and even colour (remember that dress?). 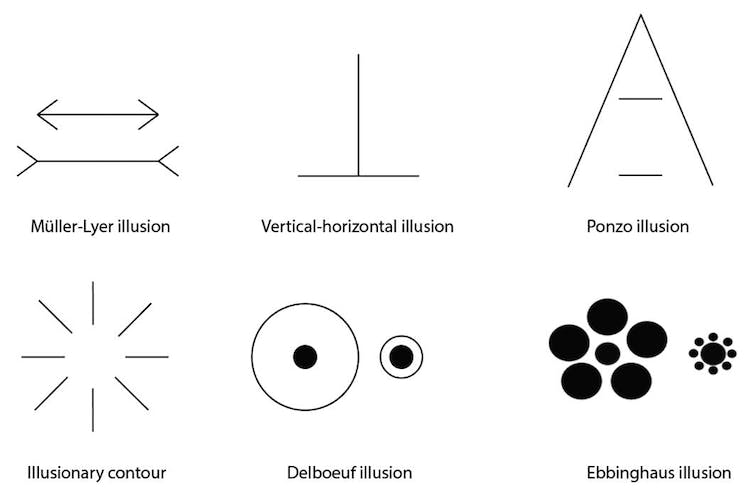 The lines or shapes around an object can change the way your brain sees it. (Scarlett Howard)

Visual illusions are errors in your own perception which can allow you to process the very complex visual information you see more easily.

One of the strongest geometric illusions we humans see is an illusion of size, called the Ebbinghaus Illusion. 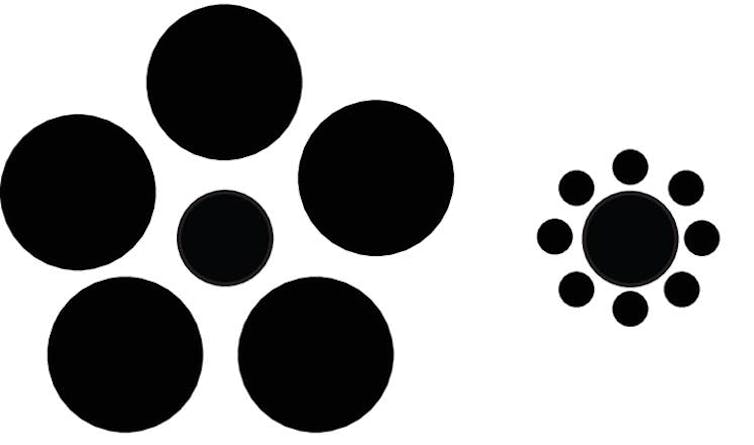 Interestingly, species such as bottlenose dolphins, bower birds, domestic chicks, and redtail splitfins see this illusion in the same way as humans. However, animals such pigeons, domestic dogs, and bantams see the opposite illusion to what we see, and baboons do not see an illusion at all.

To understand why different species see size illusions in such different ways, and how an insect with a miniature brain might view a size illusion, we developed an experimental design using honeybees.

Why do animals perceive illusions differently?

It's intriguing that some species view size illusions the same way as us, and some animals do not. Why is it that a baboon does not see any illusion when looking at the Ebbinghaus Illusion?

Why do pigeons and dogs see the opposite illusion to us? Our team decided to look into the methodology of the past studies that had shown these differences.

When baboons, pigeons, dogs, and bantams were tested, they were looking at the illusion from either a set distance or from a forced close-range distance.

Baboons, on the other hand, were viewing the illusion at a set distance, unable to move closer than a certain distance from a screen that presented the illusionary pictures.

With this knowledge, we decided to test honeybees using two study conditions:

How does a bee view size illusions?

To determine if bees could perceive size illusions, we first had to find a way to ask them.

When bees had learnt to either choose larger or smaller sized black square targets, we manipulated the size of the background, thus trying to induce the perception of a visual illusion (similar to the Delboeuf Illusion). 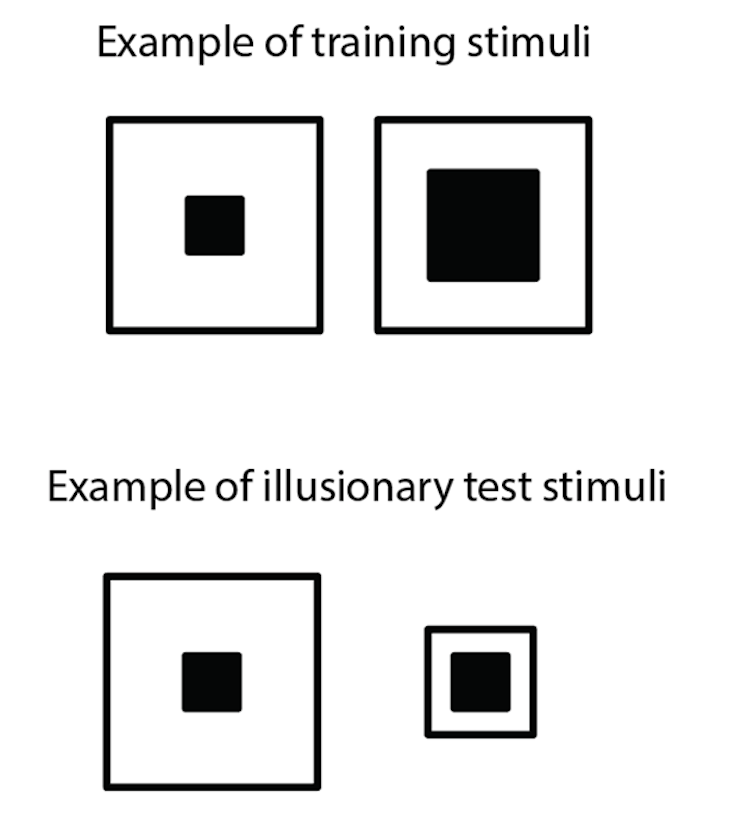 Now, we are interested in whether some past study results were due to experimental set-up: maybe more or even all animals could perceive illusions like humans, depending on the context in which they are viewing these illusions.

What does this mean for the evolution of vision?

Visual illusions are useful because they allow us to process complex scenes, with multiple pieces of information, as a whole by using context as a cue.

Since different animals see size illusions, understanding how this works could help us learn more about how vision itself evolved.

One explanation of why such different animal species, from humans to bees, see size illusions is because an ancient ancestor had this ability, and it has been conserved throughout evolution.

However, a more likely scenario is that the evolution of visual illusion perception is due to convergent evolution. This occurs when different species evolved the ability to perceive illusions separately.

The ability of bees to perceive a size illusion in a free-flying environment also has implications for flower evolution. Flowers could have evolved to exploit the ability of bees seeing illusions to make nectar areas look more appealing.

One genus of flower, Wurmbea, appears to have illusionary properties such as differently sized flowers with patterns reminiscent of size illusions such as the Ebbinghaus and Delboeuf Illusions.

A very important lesson from this study is that viewing context can make scenes appear very different to reality. This is very important to remember when working on vision in humans or any other animal.