Astronomers working with the Very Large Array – a radio telescope located in New Mexico – have finally managed to peer past Jupiter’s dense outer clouds and deep into the gas giant’s atmosphere for the first time, revealing a layer of flowing ammonia underneath.

The team wasn’t able to merely see just beyond the clouds - they could penetrate roughly 100 kilometres (60 miles) into the planet’s atmosphere, providing enough detail to map these ammonia flows. This might help explain how some of the gas giant’s most interesting features came to life, such as the Great Red Spot – a storm that's been raging for the last 400 years.

The team, led by astronomer Imke de Pater from the University of California, Berkeley, was able to pull off this wonderful feat by observing the wavelengths of radio waves coming through the atmosphere over a period of time, reports Sarah Lewin for Space.com.

Then, they used a newly developed algorithm to turn these images - which tend to look awfully blurry at first because radio telescopes record pictures over a period of time - into something more readable.

"Jupiter’s rotation once every 10 hours usually blurs radio maps, because these maps take many hours to observe," said team member Robert Sault, from the University of Melbourne in Australia. "But we have developed a technique to prevent this and so avoid confusing together the upwelling and down welling ammonia flows, which had led to the earlier underestimate."

When this algorithm was applied to the images captured by the Very Large Array, which was just upgraded to allow researchers to capture pictures at even greater detail, the team was able to create a highly-detailed map of the entire planet’s ammonia flows.

Those beautiful blue, gold, and red colours reflect the radio wavelengths being detected from the planet: "We in essence created a three-dimensional picture of ammonia gas in Jupiter's atmosphere, which reveals upward and downward motions within the turbulent atmosphere," de Pater said in a statement.

These maps clearly show hot spots - areas that appear brighter through the telescope - where ammonia levels are more active, which suggests that these areas may play a role in creating the cloud formations that are commonly seen on the planet’s outer atmosphere.

"With radio, we can peer through the clouds and see that those hotspots are interleaved with plumes of ammonia rising from deep in the planet, tracing the vertical undulations of an equatorial wave system," said team member Michael Wong from UC Berkeley. 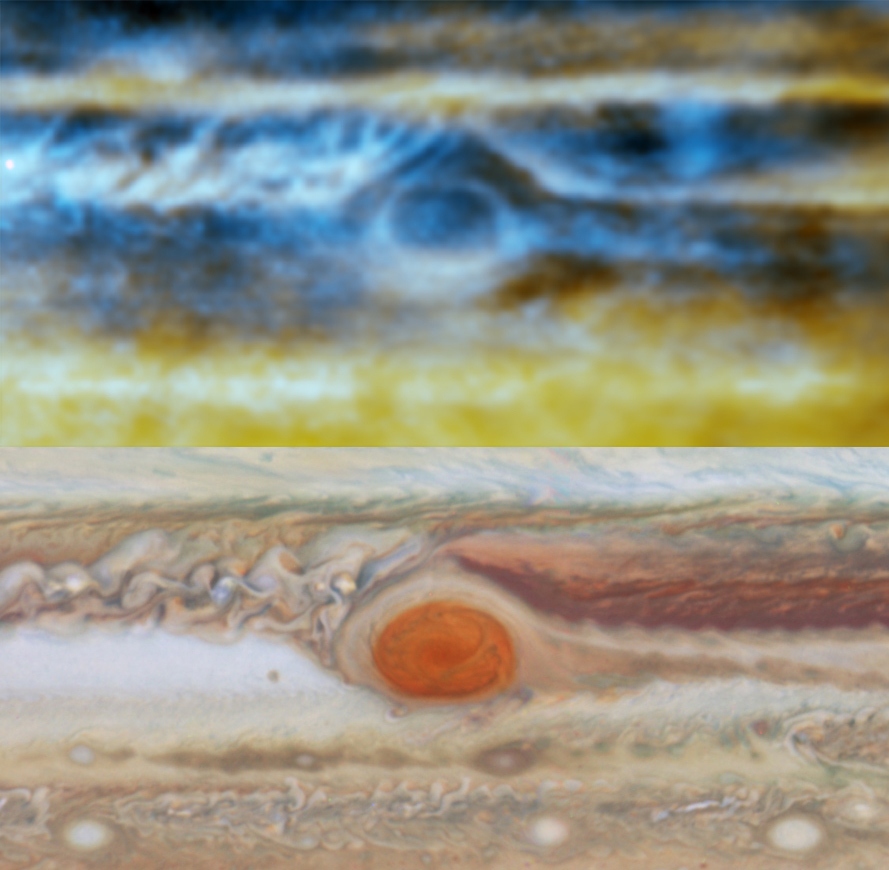 The map will no doubt help other astronomers understand more about Jupiter’s atmosphere in the future, and their new techniques will hopefully allow them to dig even deeper.

The team’s study comes only a month before NASA’s Juno spacecraft is set to arrive at the gas giant where it will carry out a series of experiments to hopefully provide researchers back on Earth with new details about Jupiter’s composition, atmosphere and gravitational fields.

Needless to say, it’s an exciting time for those studying Jupiter.

The team’s findings were published in the journal Science.