Squids Can Edit Their RNA in an Unprecedented Way, Scientists Discover

When it comes to squids, you just can't keep them down.

Not just because they're slippery, but also because they have an incredible genetic editing ability - it lets them tweak their own RNA long after it's left the nucleus.

Here's what that means. Genes, in humans at least, mostly stay unchanging until they're recombined and passed onto the next generation.

This is the same for our messenger RNA (mRNA). Helpful molecules read our DNA, create short little RNA messages, and send them outside the nucleus to tell the rest of the cell which proteins need to be built.

Once that mRNA has exited the nucleus, it's thought the genetic information it carries can't be messed with much - but new research has shown that in squid nerves, this isn't the case.

"We are showing that squid can modify the RNAs out in the periphery of the cell," says Marine Biological Laboratory (MBL), Woods Hole geneticist Joshua Rosenthal.

"It works by this massive tweaking of its nervous system," Rosenthal told Wired. "Which is a really novel way of going through life."

The team took nerves from specimens of adult male longfin inshore squid (Doryteuthis pealeii), and analysed the protein expression, as well as the squids' transcriptome, which is similar to a genome, but for mRNA.

They found that in squid nerves (or neurons), the mRNA was being edited outside of the nucleus, in a part of the cell called the axon.

This mRNA editing allows the squids to finely tune the proteins they produce at local sites (see diagram below). With this finding, squids have become the only creatures we know of that can do this. 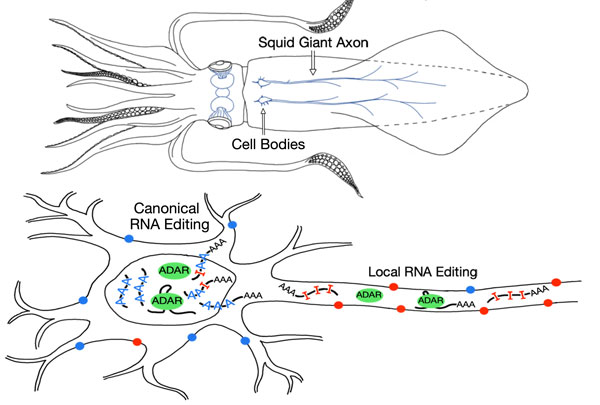 This isn't the first time squids have shown off their genetic editing prowess, though. Back in 2015, a similar team at MBL discovered that squids edit their mRNA inside their nucleus to an incredibly large degree – orders of magnitude more than what happens in humans.

"We thought all the RNA editing happened in the nucleus, and then the modified messenger RNAs are exported out to the cell," Rosenthal explains.

But the team showed that although editing is happening in both, it occurs significantly more outside the nucleus in the axon, rather than inside the nucleus.

So, why do squids bother? Why do they need to change their mRNA so much? Well, we don't yet know, but the research team has some ideas.

Octopus, cuttlefish and squids all use mRNA editing to diversify the proteins produced in the nervous system. This could be one of the reasons why these creatures are so much smarter than other invertebrates.

"Such a process could fine-tune protein function to help meet the specific physiological demands of different cellular regions."

Although right now this is just an interesting genetics study into squids, the researchers think that eventually, this type of system might be able to help treat neurological disorders that include axon dysfunction.

CRISPR has completely changed the game when it comes to editing the DNA inside our cells, and RNA is significantly less permanent and therefore editing it could be less dangerous.

"RNA editing is a hell of a lot safer than DNA editing," Rosenthal told Wired.

"If you make a mistake, the RNA just turns over and goes away."

The research has been published in Nucleic Acids Research.