The Lorax Was Inspired by a Real Creature, And How Did We Not Know About This Before?

At the far end of town where the Grickle-grass grows, a team of professors has finally cracked The Lorax, by Dr. Seuss.

You may not have realized that The Lorax needed cracking, but that's why you're not an anthropologist at Dartmouth College.

In a paper released Monday in the prestigious journal Nature Ecology & Evolution, scholars who sound as if they have smallish bees up their noses claim to have discovered the biological source of the Lorax and his beloved Truffula Trees.

But first, some background.

As millions of children and parents know, The Lorax is about a lush land threatened by the Once-ler, who cuts down Truffula trees to make Thneeds, a kind of all-purpose, full-body sweater.

The Lorax, a furry little spoilsport "who speaks for the trees", objects with increasingly alarmed reports on the destruction caused by the Once-ler's industrial plant: there's not enough Truffula Fruit to go 'round.

Despite the story's silly words and jingly rhymes, its thesis is sobering and clear: Unbridled capitalism will destroy the Earth.

Dr. Seuss - the pen name of the late Theodor Seuss Geisel - published The Lorax in 1971, and it quickly became a classic children's book, a staple of the environmental movement and a major buzzkill for the logging industry.

Kids realize that the Lorax wants to protect the land and the Brown Bar-ba-loots, but scholars have long suspected that more is going on beneath the brightly colored tufts of the Truffula trees.

The new study, "Dr. Seuss and the Real Lorax", stemmed from a chance encounter at Dartmouth.

Nathaniel J. Dominy, an anthropology professor with two small children, and Donald E. Pease, an English professor who wrote a biography of Geisel, found themselves seated next to each other at an academic dinner.

The two scholars soon realized that their work overlapped in a curious way: Dominy is an expert on primates in Kenya; Pease noted that Geisel published The Lorax soon after a trip to Kenya in 1970.

As Dr. Seuss would say, "Oh, the thinks you can think up if only you try!"

Now, almost a half-century after the Lorax first popped out of a stump, his real identity can be revealed.

Four scholars, led by Dominy, explain their method like this: "We used eigenface decomposition methods to calculate facial similarities and we generated the plot with t-distributed stochastic neighbor embedding (t-SNE), an iterative algorithm that down-projects multidimensional information into two dimensions for visualization."

About now, you may be thinking, "I would not read that on a boat, I would not read that with a goat," but hang on. That's just a fancy way of saying that the scientists fed photos of monkeys and illustrations of the Lorax into a computer to determine the closest match.

Their conclusion: The Lorax was inspired by the patas monkeys that live in West and East Africa. These creatures share the Lorax's general facial characteristics, particularly his distinctive mustache.

The monkeys' vocalizations sound like the Lorax's "sawdusty sneeze". And the monkeys depend, for 80 percent of their diet, on the Seussian-looking whistling thorn acacia trees of the Laikipia plateau. 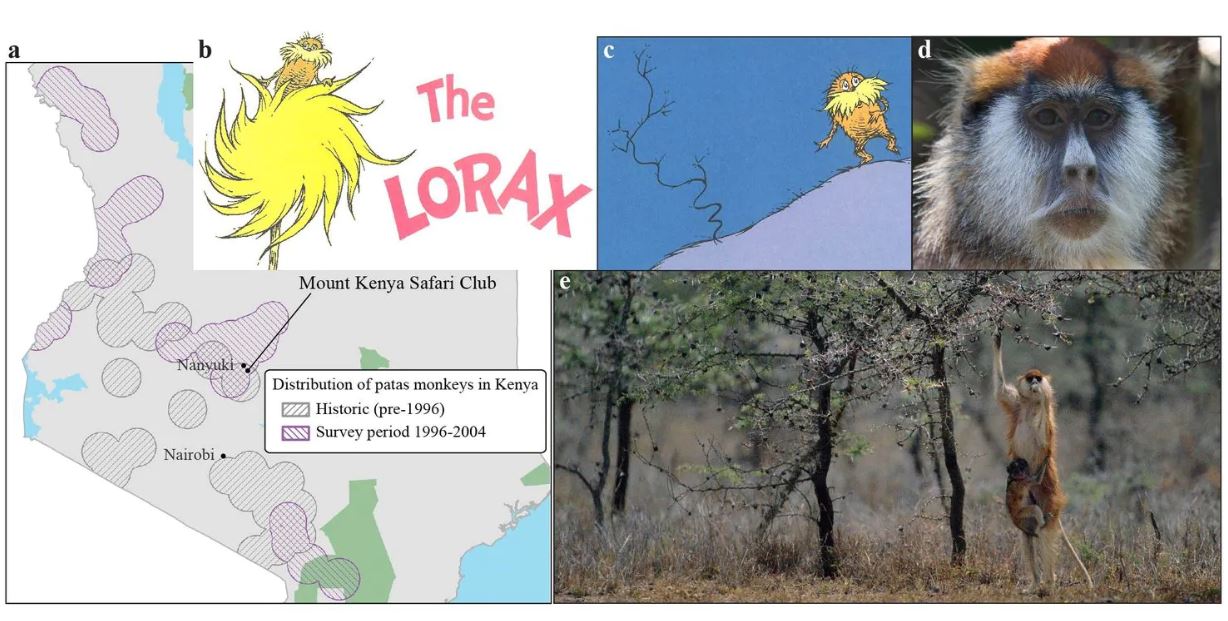 Above: A look at the location of the Mount Kenya Safari Club together with data on the patchy distribution of patas monkeys (figure a). Researchers believe Dr. Seuss based "The Lorax" on the plight of the patas monkeys, a species that depends on the Seussian-looking whistling thorn acacia trees (figure e) for sustenance.

That may seem like a set of curious but inconsequential similarities, but these authors argue that how we think of the Lorax determines how we think about his plight.

Regarding the Lorax as an animal indigenous to the land of the Truffula trees "challenges traditional interpretations of the Lorax as an ecopoliceman asserting his authority."

In other words, the Lorax isn't some tiresome scold, some shrill environmentalist who makes us want to throw up our hands and sigh, "Good-by, Thing. You sing too long".

No, the Lorax is a creature intimately dependent on the land that the Once-ler is destroying. That, the authors suggest, makes his story much more sympathetic.

Of course, it's unlikely this study will sway the Whos down in Whoville. Among Dr. Seuss's books, The Lorax is strikingly apocalyptic and unusually polemic.

The story's imagery grows darker and darker until the land is denuded and the atmosphere clogged. On the final page, the Once-ler, now cognizant of the destruction he's wrought but apparently unwilling to do anything about it, tosses down the last precious Truffula seed to a little boy.

"You're in charge," the Once-ler says. "Grow a forest. Protect it from axes that hack. Then the Lorax and all of his friends may come back."

We don't need "eigenface decomposition methods" to know there's a lot riding on that one word "may."