Researchers digging in Peru's Ocucaje desert have uncovered the skull of an enormous marine predator thought to be the ancestor of modern whales and dolphins.

Four feet long (1.2 meters) and lined with knife-like teeth, the skull appears to be a new species of Basilosaurus – a genus of ferocious marine mammals that lived some 36 million years ago during the Eocene epoch, researchers from the National University of San Marcos (UNMSM) in Lima told Reuters.

From snout to tail, the creature probably measured about 39 feet (12 meters) long, or about the size of a city bus.

For now, researchers are calling this ancient beast the "Ocucaje Predator." It won't be formally named until the team publishes a scientific description of the species in a peer-reviewed journal.

"It was a marine monster," Rodolfo Salas, founder and director of the paleontology department at the Museum of Natural History at UNMSM, told Reuters and other media outlets at a news conference on March 17. "When it was searching for its food, it surely did a lot of damage."

According to the researchers, the Ocucaje Desert was once the bottom of an ancient ocean. Basilosaurus and its ferocious cousins swam these seas as apex predators from 41 million to 34 million years ago, gliding through the water with bodies that resembled enormous snakes, but with a large pair of flippers near their heads. 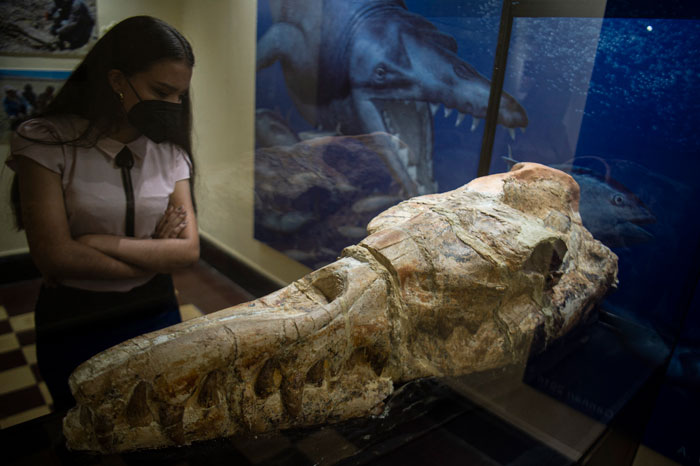 "Basilosaurus" means "king lizard," and the creature's serpentine skeleton was once mistaken for a marine reptile, according to Smithsonian.

Scientists now know that Basilosaurus was a mammal – a fully aquatic cetacean, like the whales and dolphins that would follow it millions of years later.

Earlier whale ancestors were mammals who lived on land full-time, then gradually evolved to be semi-aquatic over millions of years, Live Science previously reported.

Today, there are more than 90 species of cetaceans.

The Ocucaje desert is abundant in fossils, some dating back more than 42 million years, according to the researchers.

Previous excavations have uncovered other early whale ancestors, dolphins, sharks, and other creatures of the ancient deep.