How to Fix Your Phone if It Gets Water Damage (Hint, Rice Won't Help)

If you've ever gotten your phone wet in the rain, dropped it in water or spilt liquid over it, you're not alone. One study suggests 25 percent of smartphone users have damaged their smartphone with water or some other kind of liquid.

Liquid penetrating a smartphone can affect the device in several ways. It could lead to:

While new phones are advertised as "water resistant", this doesn't mean they are waterproof, or totally immune to water. Water resistance just implies the device can handle some exposure to water before substantial damage occurs.

Samsung Australia has long-defended itself against claims it misrepresents the water resistance of its smartphones.

In 2019, the Australian Competition and Consumer Commission (ACCC) took Samsung to Federal Court, alleging false and misleading advertisements had led customers to believe their Galaxy phones would be suitable for:

use in, or exposure to, all types of water (including, for example, oceans and swimming pools).

Samsung Australia subsequently denied warranty claims from customers for damage caused to phones by use in, or exposure to, liquid.

Similarly, last year Apple was fined €10 million by Italy's antitrust authority for misleading claims about the water resistance of its phones, and for not covering liquid damage under warranty, despite these claims.

How resistant is your phone?

The water resistance of phones is rated by an "Ingress Protection" code, commonly called an IP rating. Simply, an electrical device's IP rating refers to its effectiveness against intrusions from solids and liquids.

The rating includes two numbers. The first demonstrates protection against solids such as dust, while the second indicates resistance to liquids, specifically water. 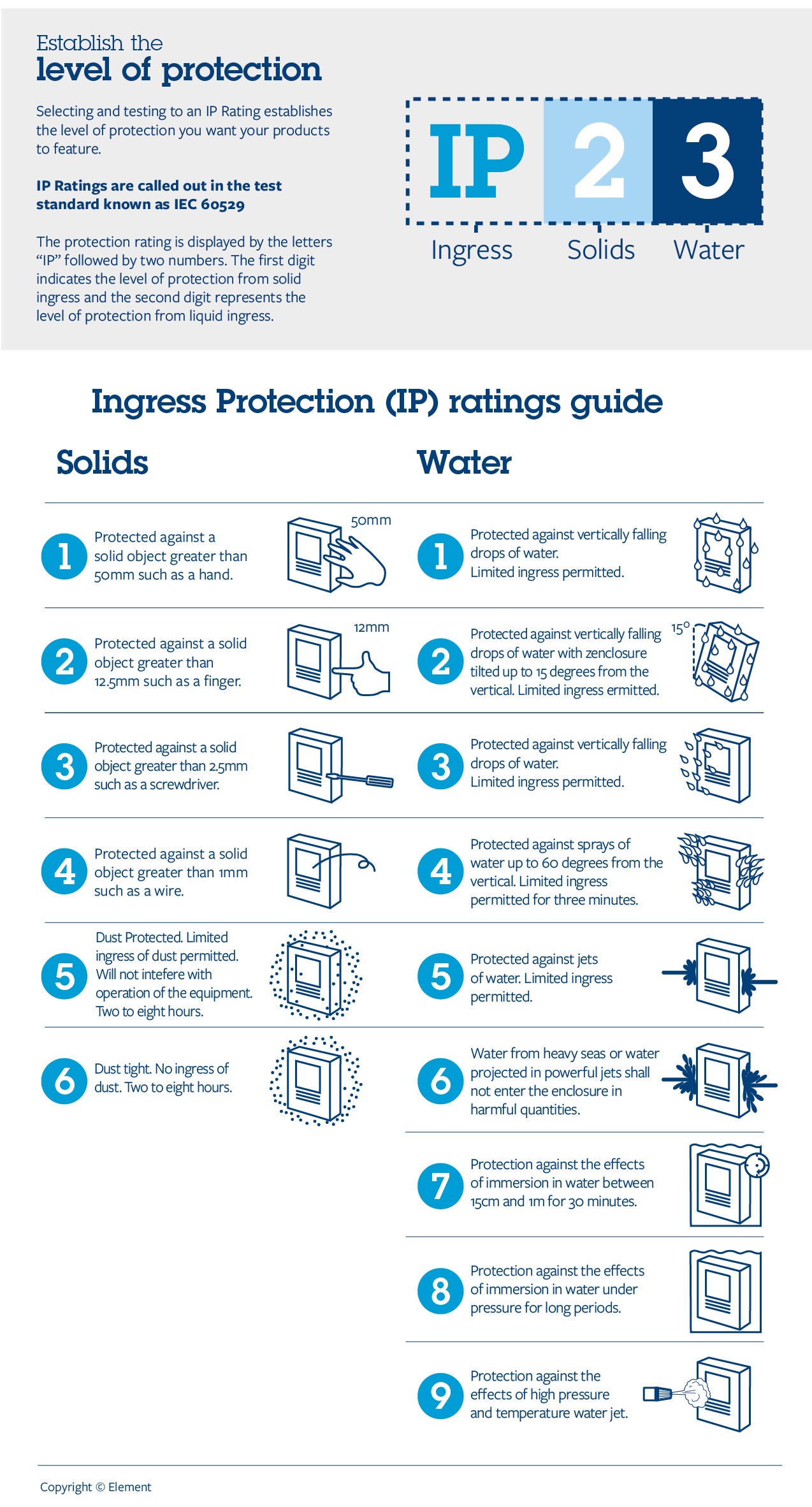 A phone that has a rating of IP68 has a solid object protection of 6 (full protection from dust, dirt and sand) and a liquid protection of 8 (protected from immersion in water to a depth of more than one metre).

Although, for the latter, manufacturers are responsible for defining the exact depth and time.

The popular iPhone 12 and Samsung Galaxy S21 phones both have a rating of IP68. However, regarding exposure to water, the iPhone 12 has a permissible immersion depth of a maximum of 6m for 30 minutes, whereas the Galaxy 21's immersion limit is up to 1.5m, also for 30 minutes.

While IP ratings indicate the water-repellent nature of phones, taking most phones for a swim will land you in deep trouble. The salt content in oceans and swimming pools can corrode your device and cost you a hefty replacement.

Moreover, phone manufacturers carry out their IP testing in fresh water and Apple recommends devices not be submerged in liquids of any kind.

Luckily, water resistant phones are generally able to survive smaller liquid volumes, such as from a glass tipping over.

Exposure to water is something manufacturers have in mind when designing phones. Most Apple and Samsung phones come with a liquid contact/damage indicator strip located inside the SIM card tray.

This is used to check for liquid damage that may be causing a device to malfunction. An indicator strip that comes in contact with liquid loses its usual color and becomes discolored and smudgy.

A discolored strip usually renders your phone ineligible for a standard manufacturer warranty.

If you have any of the more recent smartphones from Apple or Samsung, then your device will be able to detect liquid or moisture in its charging port and will warn you with an alert. This notification only goes away once the port is dry.

But what should you do if this dreadful pop-up presents itself? 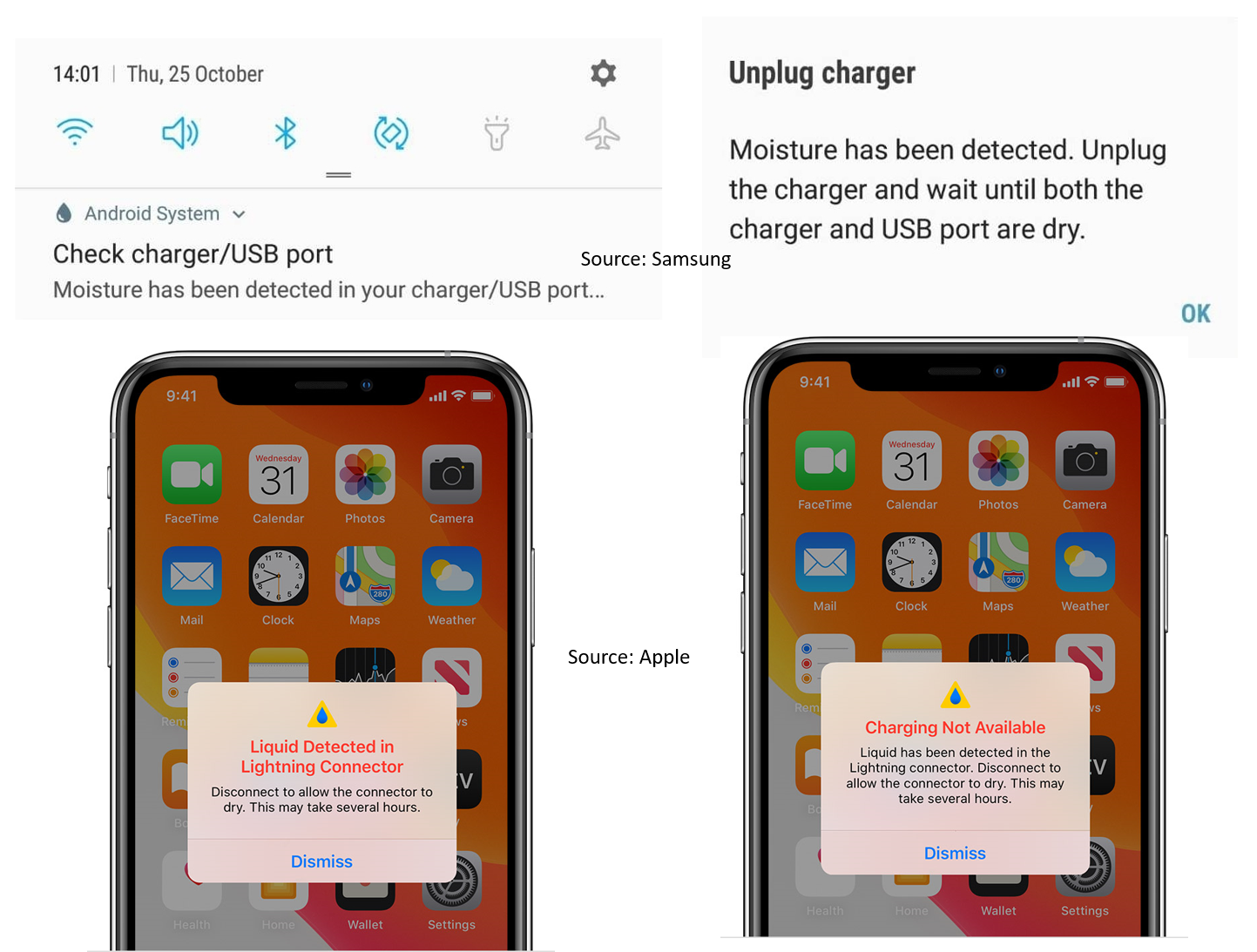 Some new generation phones have a moisture/liquid alert notification. (Samsung/Apple)

Firstly, do not put your phone in a container of rice. It's a myth that rice helps in drying out your phone. Instead, follow these steps:

If the above steps don't help and you're still stuck with a seemingly dead device, don't try opening the phone yourself. You're better off taking it to a professional.