Astronomers have speculated for decades that the giant waves that meander through the Earth's atmosphere and oceans, driving the weather, might also exist on the Sun. Now those waves have been unambiguously detected inside the Sun, and found to be very similar to those on Earth.

These Rossby waves, or planetary waves, naturally occur in rotating fluids. It is the rotation of the Earth that causes Rossby waves to propagate through the atmosphere and ocean, affecting the climate and weather.

However, while the existence of Solar Rossby waves has been hypothesised, observing them has proven far more difficult.

"Solar Rossby waves have very small amplitudes and periods of several months, thus they are extremely difficult to detect," explained Laurent Gizon, director of the Max Planck Institute for Solar System Research and co-author on the new paper.

The reason why the team has been able to detect them now is, like many recent space discoveries, down to two factors: technology advanced enough to make the detections, and scientists trained to painstakingly sift through the data.

The research team perused six years' worth of observation data from the Helioseismic and Magnetic Imager on board NASA's Solar Dynamics Observatory, which was launched in 2010.

This instrument has high enough spatial resolution that the team could follow the movement of the photospheric granules on the visible surface of the Sun.

If you've looked at a high-resolution photograph of the Sun, you've seen these granules. They're the tops of convection cells in the Solar plasma, in constant roiling motion - like bubbles in a pot of boiling water, writ large; each granule is up to 1,600 kilometres (994 miles) in diameter.

By carefully analysing images of the Sun, the research team was able to use these granules as passive tracers to reveal the much larger underlying vortex flows associated with Rossby waves.

Helioseismology (the study of the Sun's interior based on observations of the waves on its surface) confirmed the team's finding, and allowed them to trace the waves to depths of up to 20,000 kilometres (12,427 miles) below the surface of the Sun.

It is, they argue, a much more conclusive result than the discovery of Solar Rossby waves announced last year. On that occasion, a team of researchers used a 360-degree view of the Sun to study the movement of bright spots in the Sun's corona, concluding that their migration across the Sun was consistent with what we know of Rossby waves.

In the new research, the team notes that they see no connection between the movement of those coronal elements and the newly described internal Rossby waves.

They found that the internal Rossby waves are stable for several months, which allowed the researchers to determine the relationship between their frequency and their wavelength for the first time. 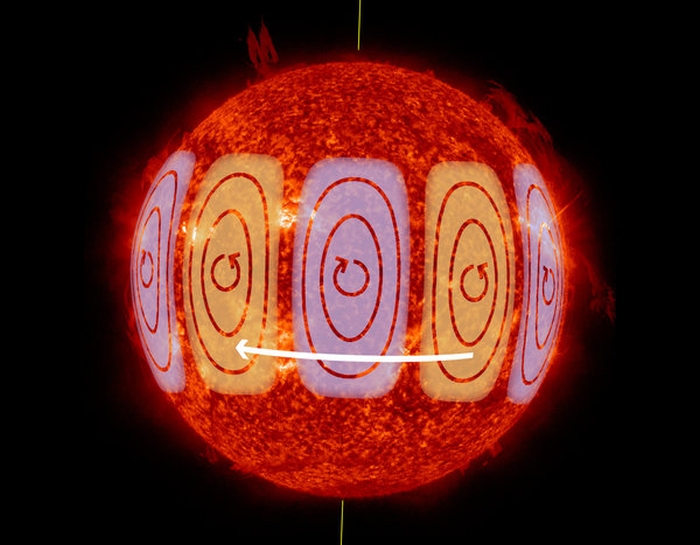 Diagram of the vortices. (MPS/NASA/HormesDesign)

The discovery offers an explanation for why large-scale flows within the Sun's interior have been found to be weaker than expected: the Rossby waves could be removing energy from convection at the largest scales.

They could also constitute the mechanism whereby angular momentum is exchanged between a star and a planet orbiting it closely.

But it's early days yet. More research will be required to figure out what impact the Solar Rossby waves have on Solar weather and other interactions with the surrounding space - and why they behave the way they do.

"Solar Rossby waves are gigantic in size, with wavelengths comparable to the solar radius," Gizon said.

"All in all, we find large-scale waves of vorticity on the Sun that move in the direction opposite to rotation. That these waves are only seen in the equatorial regions is completely unexpected."