The director of Russia's Institute of Biophysics has uncovered a top secret report on the aftermath of a Soviet nuclear weapons test in Kazakhstan during the 1950s, and has handed it over to US journalists.

While the test itself was no secret, the report reveals that Soviet scientists discovered widespread radioactive contamination and radiation sickness surrounding the Semipalatinsk test site, and kept it secret from both the locals and the outside world for decades.

"For many years, this has been a secret," Kazbek Apsalikov, director of the Institute of Biophysics in Moscow, told Fred Pearce New Scientist.

Apsalikov says he recently uncovered the top secret report in the archive of the Russian Institute of Radiation Medicine and Ecology (IRME) in Semey, Kazakhstan, and passed it on to New Scientist last week.

According to Pearce, the report is marked as "top secret", and outlines "the results of a radiological study of Semipalatinsk region", where in 1956, a nuclear disaster four times worse than Chernobyl in terms of the number of cases of acute radiation sickness had occurred.

As one of the few reports that happened to evade Soviet censors during the 1950s, the report shows for the first time just how much government scientists knew about the risks of the aftermath, and the extent to which they kept their research from being disseminated to the public.

The report has yet to be made public, but you can see the title page below: 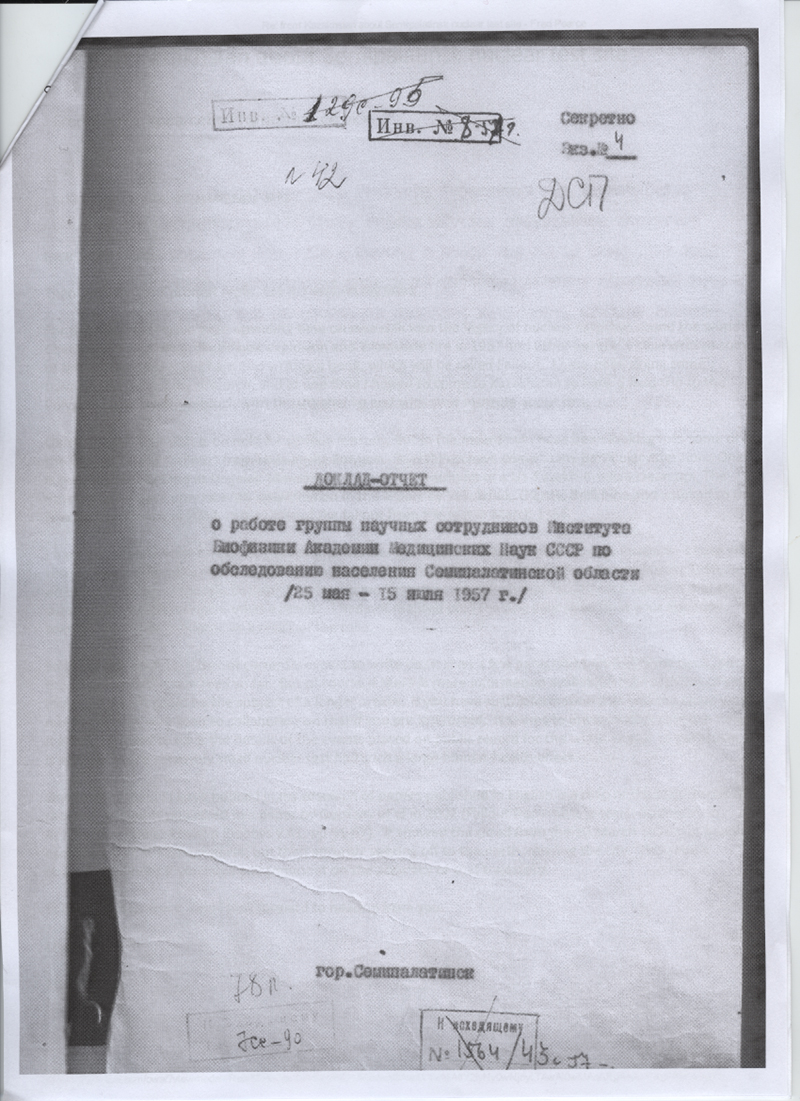 For a bit of background on the Semipalatinsk Nuclear Test Site (SNTS) - also known as the Polygon - it's now notorious as the world's worst radiation hotspot, where Soviet officials carried out 456 nuclear detonations between 1949 and 1991.

According to a more recent 2014 report by the Norwegian Institute of International Affairs, and co-authored by Apsalikov, 1 million people have been recognised by the government of Kazakhstan as having suffered, "in a broad sense", from the SNTS.

The first nuclear test to be carried out in the 18,300-square-km (7,065-square-mile) territory was the detonation of a plutonium bomb on 29 August 1949, that was "almost an exact copy" of the US bomb dropped on Nagasaki four years earlier.

The first atomic bomb dropped from a plane by the Soviet occurred at the SNTS on 18 October 1951, and in 1953, they tested their first thermonuclear weapon.

Experts have estimated that 111 of the tests carried out at the site were conducted on the surface or in the air, between 1949 and 1962.

The Partial Test Ban Treaty of 1963 banned such "atmospheric" tests on a global scale in 1963 because they caused the most contamination of the environment and radiation exposure to the public.

According to the 2014 report, after 1962, all tests at the SNTS were conducted underground in tunnels and shafts.

"One reason - not at least for secrecy purposes - for the initial choice of Semipalatinsk as nuclear test site was the vastness and relative remoteness of the Kazakh steppes," Apsalikov and his colleagues report.

"But atomic bombs do not restrict their impact to the location of their detonation, and a large population could potentially be affected."

Case in point: one test in 1956 at Semipalatinsk blanketed the city of Ust-Kamenogorsk, some 400 km (248 miles) away, in nuclear fallout, and put 638 people in hospital with radiation sickness.

And as recently as 2014, researchers still didn't have access to information about what ended up happening to those people.

As Apsalikov and his team explain:

"During Soviet times, nuclear tests and their consequences for human health were surrounded by total secrecy. In fact, until 1956, the government did not even conduct studies about the nuclear testing's effect on the population living close to the test site.

There are no clear statistics available about the acute effects of the testing.

The immediate impetus for health studies came later, in connection with an emergency situation caused by a surface nuclear detonation on 16 March 1956, the radioactive cloud of which reached the city of Ust-Kamenogorsk, 400 km from the explosion epicentre.

The city's population was exposed to nuclear fallout with radiation doses so high as to cause acute radiation poisoning. In response, the Soviet leadership established a special medical institution and hospitalised 638 persons suffering from radiation poisoning. No information about the fate of these people is available, however."

But now, according to the newly uncovered report, Soviet researchers investigated conditions at Ust-Kamenogorsk on three separate occasions, the results of which are only just coming to light.

As Pearce explains, the researchers found that a month after another disastrous 1956 test, radiation rates were still up to 100 times what the report classifies as the "permissible rate".

The report also revealed that scientists who had conducted expeditions to eastern Kazakhstan had recommended the immediate halt of eating local grain, based on "considerable radioactive contamination of soils, vegetable cover, and food", but this does not appear to have been acted on.

And perhaps the most damning part of the report was the way in which it deliberately misappropriated blame for alterations in the local people's nervous system and blood composition at the time of the nuclear tests.

The changes "could not be considered as the changes which arose only due to impact of ionising radiation", the report concludes, and instead should be put down to put sanitation, a "dreary diet", and diseases such as tuberculosis.

Hopefully, with the release of this report, and the work of Apsalikov and his colleagues, we'll get some more clarity about what actually happened to the locals during this time.

You can find out more about the report over at New Scientist.