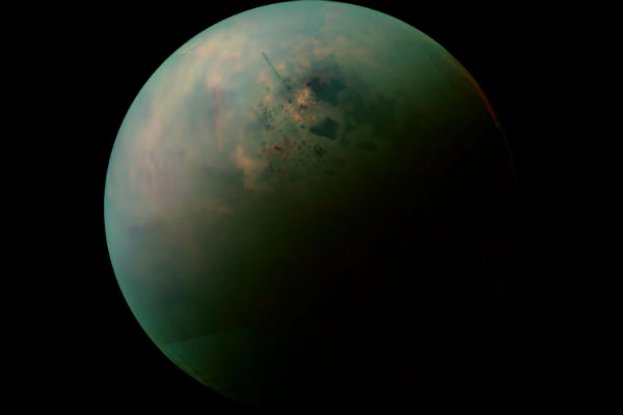 Saturn's Moon Titan Is Wrapped in Enormous Clouds of Cyanide

If you think the stark, dry landscape of our Moon is unappealing, it’s a tropical paradise compared to Saturn’s largest moon, Titan. Researchers have just identified enormous clouds of cyanide in its atmosphere.

If you think the stark, dry landscape of our Moon is unappealing, it’s a tropical paradise compared to Saturn’s largest moon, Titan. Researchers have just identified enormous clouds of cyanide in its atmosphere.

A new study by researchers from the University of Bristol in the UK, the Netherlands Institute for Space Research and Leiden Observatory, also in the Netherlands, has found that giant clouds four times the area of the UK are floating in the atmosphere of saturn’s moon, Titan.

Titan might be Saturn’s biggest moon, but it’s only relatively little, with a radius of just 2,576 kilometres. It shares some characteristics with Earth, such as an atmosphere that’s mostly nitrogen, different seasons, and several bodies of water, but it also couldn’t be any more different. One day on Titan lasts 16 Earth days, and each season lasts seven years. Rather than warm, salty oceans, the water on Titan comes in the form of freezing, hydrocarbon lakes, and the air temperature on Titan is about 200 degrees cooler than it is on Earth.

And now we know that Titan also has cyanide clouds.

Publishing in Nature, the international team used instruments on NASA’s Cassini spacecraft to observe development of an enormous polar cloud - spanning about one million square kilometres - in Titan’s atmosphere.

"The cloud was first seen in images from Cassini's cameras taken in 2012. It started off quite small but soon grew to cover the entire south polar region. This was totally unexpected and set us puzzling over what the cloud could be made of,” physicist Nick Teanby from the University of Bristol said in a press release. "Unfortunately, while the images showed that the cloud was very high up, at over 250 km above the surface, they did not allow us to figure out what the cloud was actually made of or why it was there."

It took the team another two years of gathering and interpreting data using Cassini to figure out the cloud material. They were able to match the signals picked up by Cassini to ice particles of hydrogen cyanide, also known as 'blue acid’. Hydrogen cyanide is so toxic that a concentration of 300 milligrams per one metre cubed in the air can kill a human within 10 to 60 minutes.

The team says the discovery is surprising because the south pole of Titan must be cold enough to allow the hydrogen cyanide to condense. According to the press release, Titan’s south pole had to have cooled a whooping 50 degrees in less than a year to get down to the -150 degrees Celsius atmosphere needed to create the cyanide clouds.

"This is a very rapid change given Titan's long annual cycle and is much colder than previously thought possible. It suggests that once the pole is in shadow, the upper atmosphere acts as a very efficient radiator of heat, perhaps due to the high abundance of exotic hydrocarbon and nitrogen-based compounds, which emit strongly in the infrared,” said planetary scientist Remco de Kok from the Netherlands Institute for Space Research. "Cassini is set to continue observing Titan until it takes a dive into Saturn at the end of its mission in 2017. It will be fascinating to see how the cloud will develop."