There comes a time in everyone's life when the brain and the body reach their peak, before age begins to take its toll.

While muscle mass, strength, and function start to deteriorate around age 30, new research on professional chess players suggests the brain actually ages in a slower and more gradual way.

Before a player's early 20s, performance on the chessboard appears to increase rapidly. Skill then appears to reach a plateau around 35 years of age, peak at age 40, and begin to steadily decline after age 45.

Accounting for factors other than age, like the colour of chess pieces, the length of the game, the generation of the player, and the strength of their opponent, cognitive decline after age 45 decreases only somewhat and in a statistically insignificant way. 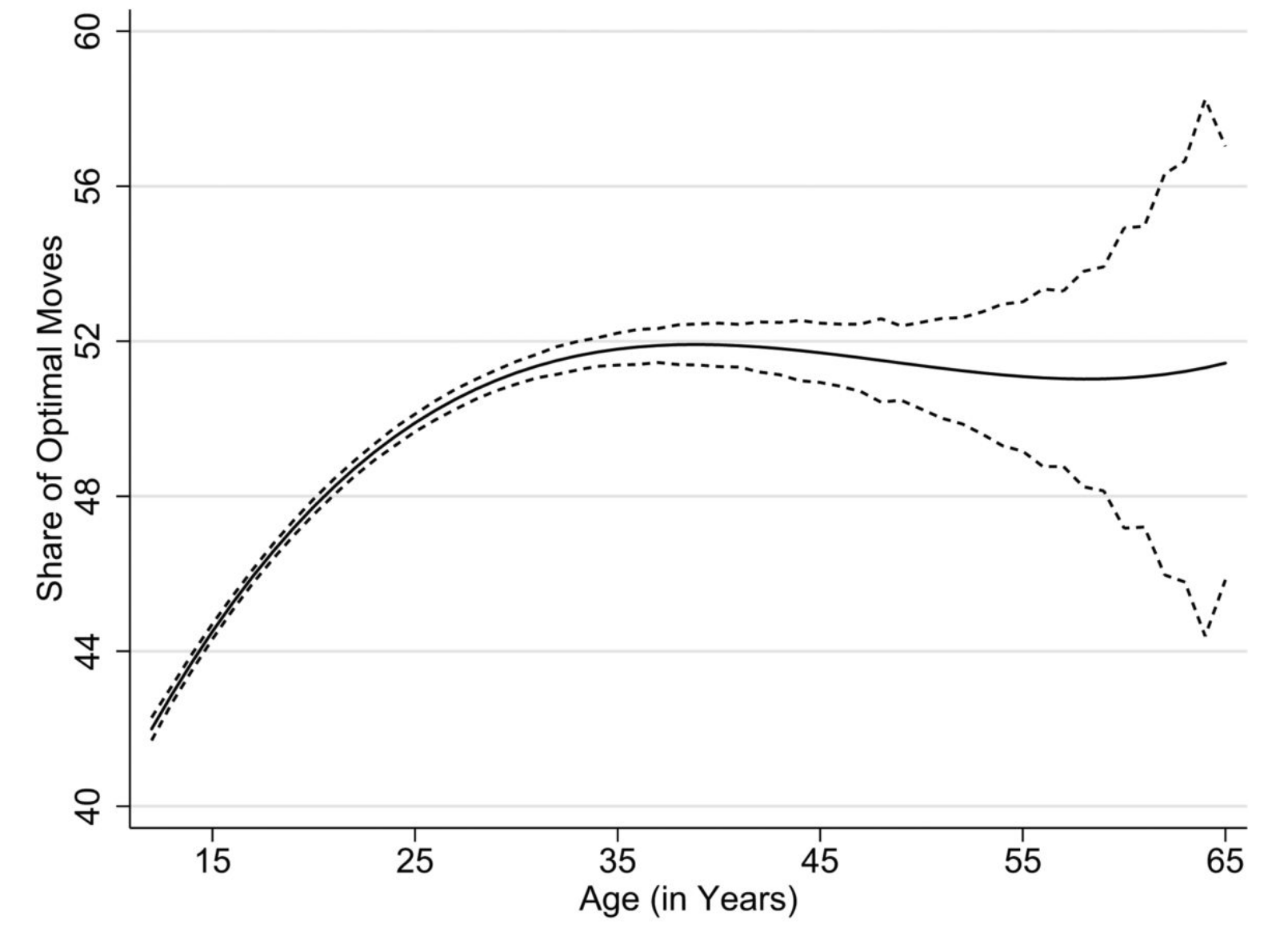 While peak brain performance probably differs somewhat from task to task, the results tend to match other estimates for peak cognitive skills, even those specifically for chess.

A lot of research on cognitive performance, however, tends to rely on skills like decision speed and working memory, but chess is different because it also depends on training and experience.

"Chess has a complex neural basis of automated processes related to identifying the configuration of pieces and their relations on the board, which involve circuits of different brain regions," the authors argue.

"The quality of a particular move thus reflects an ideal measure of performance in a demanding cognitive task of the sort that is gaining importance in the labour market."

Additionally, data from chess tournaments have been carefully recorded for decades, which makes it really useful for psychologists and neuroscientists studying cognitive skill over time.

Using data like these, a prior 2006 study found chess performance declines at a much slower rate than other physical activities like swimming.

The new research once again draws on this wealth of information to figure out when we might hit our cognitive peak.

Analysing more than 1.6 million individual moves in 24,000 chess games, scientists assessed the skill of over 4,000 players, 20 of whom were world champions between 1890 and 2014. A computerised chess engine was used to determine which moves were most optimal.

Over the course of a career, most players were found to peak at age 30, maintaining that performance for approximately 10 years before their play began to deteriorate.

Similar to age, the authors also found a similar hump-shaped performance curve for experience. Among thousands of less experienced opponents, for instance, performance increased sharply until about the age of 37 years.

This suggests experience can alter the age at which someone hits their peak performance, and this could explain why over the past century, chess players have been hitting their peak earlier and earlier, as the below graph shows. 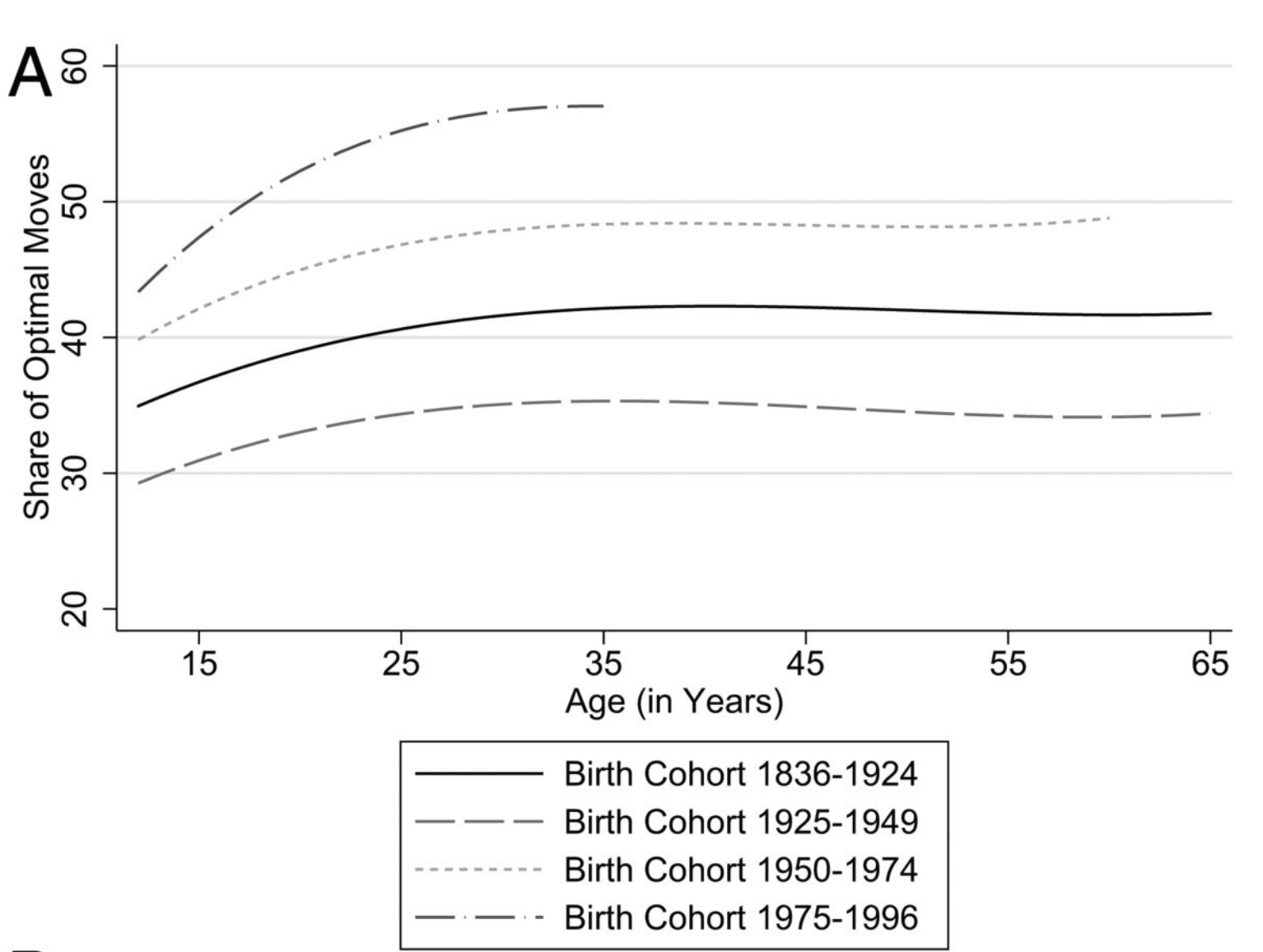 The rapid spread of chess knowledge, the emergence of chess engines, and the ease of online play means younger players are accumulating more knowledge on chess and getting more experienced sooner than they were 125 years ago.

The study is based on professionals, so it probably represents the upper bound of cognitive performance over a person's lifetime.

Still, the results are encouraging. The recent rise in chess skill among young people suggests peak cognitive performance can be reached early with the right tools and experience, and the long tail of the curve suggests we can hold on to those skills decades into the future.