In Africa, a rhino is killed every six hours for its horn. And with only around 25,000 of the animals left in the wild, rangers and scientists are desperately looking for new ways to protect the species.

They've tried drones, armed guards and sequencing the species' genomes, but now a high-tech monitoring system has been developed by researchers in the UK, and experts are calling it a "game changer" in the fight against poaching.

One of the most challenging aspects of protecting rhinos is the fact that their ranges are so incredibly large, and national parks simply don't have the staff or resources to keep every animal guarded at all times. Which is where Protect RAPID - the Real-time Anti-Poaching Intelligence Device - comes in. The system includes a spy camera that can be embedded into a horn, a GPS device, and a heart rate monitor, which sets off an alarm as soon as a rhino is killed or injured.

This means if poachers do manage to get to the animals, rangers will be able to send a helicopter to their location within minutes, and they'll have video footage to help catch and convict them, preventing them from committing further wildlife crimes. The first field trials will begin as early as next year with a black rhino population at Eastern Cape Parks in South Africa, and the developers are also looking at adapting the system to fit other threatened animals, such as tigers and elephants.

"With this device, the heart-rate monitor triggers the alarm the instant a poaching event occurs, pin-pointing the location within a few metres so that rangers can be on the scene via helicopter or truck within minutes, leaving poachers no time to harvest the valuable parts of an animal or make good an escape," one of the researchers behind the device, conservation scientist Paul O'Donoghue from Chester University in the UK, said in a press release. "You can't outrun a helicopter. RAPID renders poaching a pointless exercise."

You can see a prototype of the Protect RAPID camera fitted into the rhino horn below: 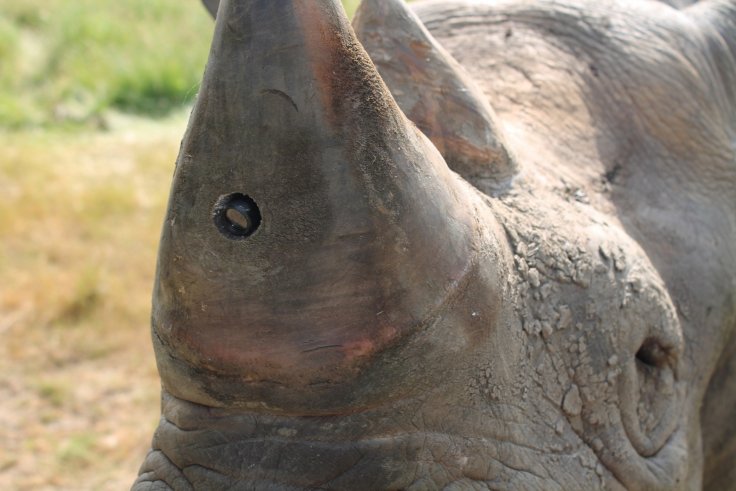 Since 2007, there's been a more than 9,000-fold increase in rhino poaching, particularly due to an increase in demand for rhino horns in Asia, where it's used in traditional Chinese medicine and as a status symbol. Based on current poaching rates, both rhinos and elephants could be wiped out in the wild within 20 years, so we desperately need new ways to put an end to it. While providing alternative products such as bioengineering synthetic rhino horn seem like a promising solution, they're not going to be able to curb the market demand for the real thing fast enough.

"Reducing market demand is critical to safeguard wildlife long term, but it needs to be coupled with urgent, effective action to stop the current poaching crisis," said Claire Bass, executive director of the Humane Society International in the UK, which supported the development of the Protect RAPID. "The Protect RAPID could be a game changer in the increasingly desperate fight against poaching, and the technology has the potential to be applied to other critically endangered species."

Meanwhile, there is only one male northern white rhino left in the wild. Sudan, photographed below, has had his horn removed in the hopes of discouraging poachers, and has armed guards with him around the clock in the Ol Pejeta Conservancy in Kenya. It's a pretty sad state of affairs when these are the lengths we need to go to ensure someone doesn't kill an animal for profit. Let's hope Protect RAPID can help us break the cycle.