Scientists Discover a Bizarre Two-Headed Shark Growing in The Lab

Researchers in Spain have discovered an extremely rare two-headed shark embryo growing in their lab.

As far as they're aware, this is the first time the trait has ever been spotted in an egg-laying shark. There have been reports of two-headed sharks before, but they've all belonged to species that give birth to live animals.

The researchers are now trying to learn more about the individual, and the discovery will hopefully provide some insight into exactly what cases the mysterious two-headed mutation - officially known as dicephaly.

The shark was a near-threatened Atlantic sawtail catshark (Galeus atlanticus) embryo, which had been collected by researchers at the University of Malaga in Spain as part of a study on cardiovascular systems.

Out of the 797 embryos they collected, one was different to the rest - it had two heads.

"Each head had a mouth, two eyes, a brain, a notochord [like a spinal cord], and five gill openings on each side," the authors write in the Journal of Fish Biology.

The body also had two hearts, two stomachs, and two livers, but it shared just one intestine and a single set of kidneys and reproductive organs. 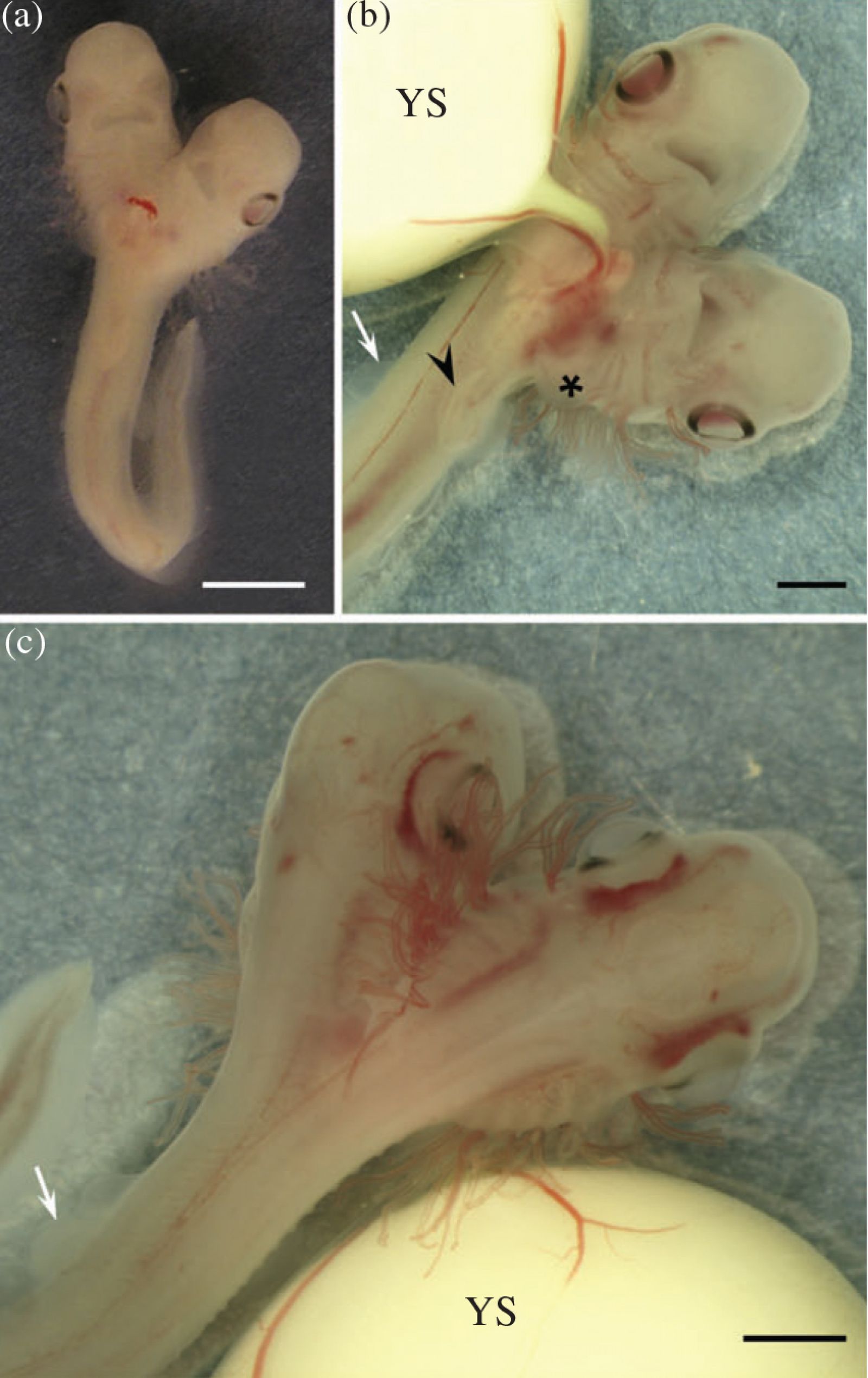 This isn't the first time a two-headed shark has been seen - two-headed bullsharks have been spotted in the past, and there are seven other reports in the scientific literature of sharks with two heads.

But all of those species gave birth to live animals, whereas the catshark is the first truly egg-laying shark species to display dicephaly - and that could be the key to figuring out the underlying cause.

This particular specimen was euthanised and preserved so the researchers could study it further. In nature, the condition is very rarely encountered, and it's unclear if that's because it's so rare to begin with, or if the creatures simply don't survive long enough to be discovered.

There have been reports of two-headed snakes, cats, and humans in the past.

"Survival after birth may occur, but would likely be very brief," Michelle Heupel, a researcher at the Australian Institute of Marine Science, told David Shiffman over at Hakai magazine. "It is unclear whether the two heads will preclude swimming and prey capture, and whether joined internal organs will function adequately."

The good news is that the leading suspect for dicephaly is genetics - not pollution, like in the case of Blinky, The Simpson's three-eyed fish.

And the researchers note that there were no birth defect-causing agents in the tanks where the embryo developed.

"We see two-headed sharks occasionally," George Burgess, director of the Florida program for shark research at the Florida Museum of Natural History told National Geographic. "It's an anomaly, caused by a genetic misfire. There are lots of different kinds of genetic misfires, and most don't make it out of the womb."

It's unclear if the cause of dicephaly differs between sharks that birth live young or lay eggs, but hopefully further investigation of this individual will give us some more answers, and could help us to better understand this rare phenomenon once and for all.