Scientists Discover 'Ingredients For Life' in 3.5 Billion-Year-Old Rocks in Australia

Researchers have discovered organic molecules trapped in incredibly ancient rock formations in Australia, revealing what they say is the first detailed evidence of early chemical ingredients that could have underpinned Earth's primeval microbial life-forms.

The discovery, made in the 3.5-billion-year-old Dresser Formation of Western Australia's Pilbara Craton, adds to a significant body of research pointing to ancient life in this part of the world – which represents one of only two pristine, exposed deposits of land on Earth dating back to the Archean Eon.

In recent years, the hydrothermal rock of the Dresser Formation has turned up repeated signals of what looks to be the earliest known life on land, with scientists discovering "definitive evidence" of microbial biosignatures dating back to 3.5 billion years ago.

Now, in a new study, researchers in Germany have identified traces of specific chemistry that could have enabled such primordial organisms to exist, finding biologically relevant organic molecules contained inside barite deposits, a mineral formed through various processes, including hydrothermal phenomena.

"In the field, the barites are directly associated with fossilised microbial mats, and they smell like rotten eggs when freshly scratched," explains geobiologist Helge Mißbach from the University of Cologne in Germany.

"Thus, we suspected that they contained organic material that might have served as nutrients for early microbial life." 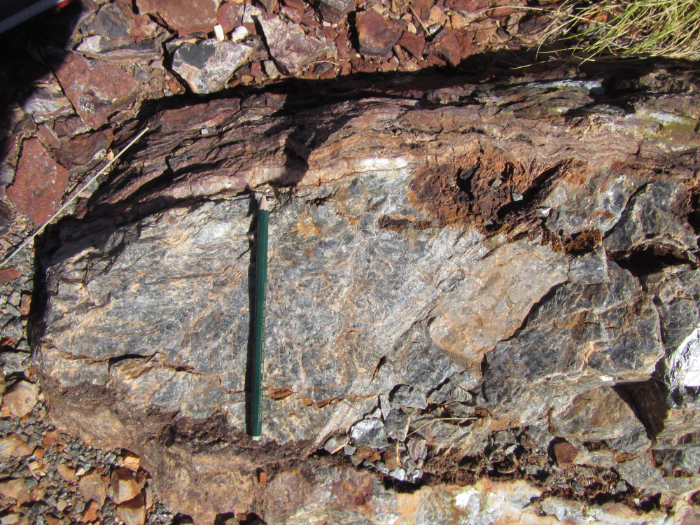 While scientists have long hypothesised about how organic molecules could act as substrates for primeval microbes and their metabolic processes, direct evidence has to date proven largely elusive.

To investigate, Mißbach and fellow researchers examined inclusions within barites from the Dresser Formation, with the chemically stable mineral capable of preserving fluids and gases inside the rock for billions of years.

Using a range of techniques to analyse the barite samples – including gas chromatography-mass spectrometry, microthermometry, and stable isotope analysis, the researchers found what they describe as an "intriguing diversity of organic molecules with known or inferred metabolic relevance".

Among these were the organic compounds acetic acid and methanethiol, in addition to numerous gases, including hydrogen sulfide, that could have had biotic or abiotic origins. Above: The Barite rock, indicating close association to stromatolites.

While it may be impossible to be sure of the precise links, the close proximity of these inclusions within the barite rock and adjacent organic accretions called stromatolites suggests that the ancient chemicals, once carried inside hydrothermal fluids, may have influenced primeval microbial communities.

"Indeed, many compounds discovered in the barite-hosted fluid inclusions … would have provided ideal substrates for the sulfur-based and methanogenic microbes previously proposed as players in the Dresser environment," the researchers write in their study.

In addition to chemicals that may have acted as nutrients or substrates, other compounds found within the inclusions may have served as 'building blocks' for various carbon-based chemical reactions – processes that could have kickstarted microbial metabolism, by producing energy sources, such as lipids, that could be broken down by life-forms.

"In other words, essential ingredients of methyl thioacetate, a proposed critical agent in the emergence of life, were available in the Dresser environments," the team explains.

"They might have conveyed the building blocks for chemoautotrophic carbon fixation and, thus, anabolic uptake of carbon into biomass."