Scientists Have Figured Out How to Make Wounds Heal Without Scars

Whether it's from a surgical procedure, clumsy shaving, or that traumatic biking incident that happened when you were five, just about everyone has a scar they wish would just fade away.

And while there's not a whole lot that can be done for scars that are already there, in 2017 researchers figured out how to make fresh wounds heal as normal, regenerated skin, instead of the usual scar tissue - something that was previously thought to be impossible in mammals.

"Essentially, we can manipulate wound healing so that it leads to skin regeneration rather than scarring," said one of the team, George Cotsarelis, chair of the Department of Dermatology at the University of Pennsylvania last year.

"The secret is to regenerate hair follicles first. After that, the fat will regenerate in response to the signals from those follicles."

If you've ever wondered why scar tissue looks so different from regular skin, it's because scar tissue doesn't contain any fat cells or hair follicles.

The type of skin that regenerates over a small, superficial cut is filled with fat cells called adipocytes, just like the skin you were born with, which means the two will eventually blend into each other once the wound has healed.

But scar tissue is made up almost entirely of cells called myofibroblasts, and doesn't contain any fat cells at all. So instead of blending into the surrounding skin once the wound has fully healed, it looks completely different - permanently.

The same goes for ageing skin - as we age, we lose our adipocytes, which leads to discolouration and deep, irreversible wrinkles.

But scientists have discovered that existing myofibroblasts can actually be converted into adipocytes, which suggests that as a wound is healing, scar tissue could be converted to regenerated skin instead - something that scientists thought could only be possible in fish and amphibians.

"The findings show we have a window of opportunity after wounding to influence the tissue to regenerate rather than scar," said one of the team, Maksim Plikus, from the University of California, Irvine.

Previous research from the group has shown that fat cells and hair follicles develop separately in regenerating skin, but not independently - and the hair follicles would always develop first.

This is something that would never occur in nature, seeing as scar tissue has no hair follicles in it.

They found that the hair follicles released a signalling protein called Bone Morphogenetic Protein (BMP) as soon as they started forming, and this actually converted the scar's myofibroblasts into adipocytes.

If hair follicles were induced to grow where a wound was healing, the resulting skin was found to be indistinguishable from pre-existing skin. 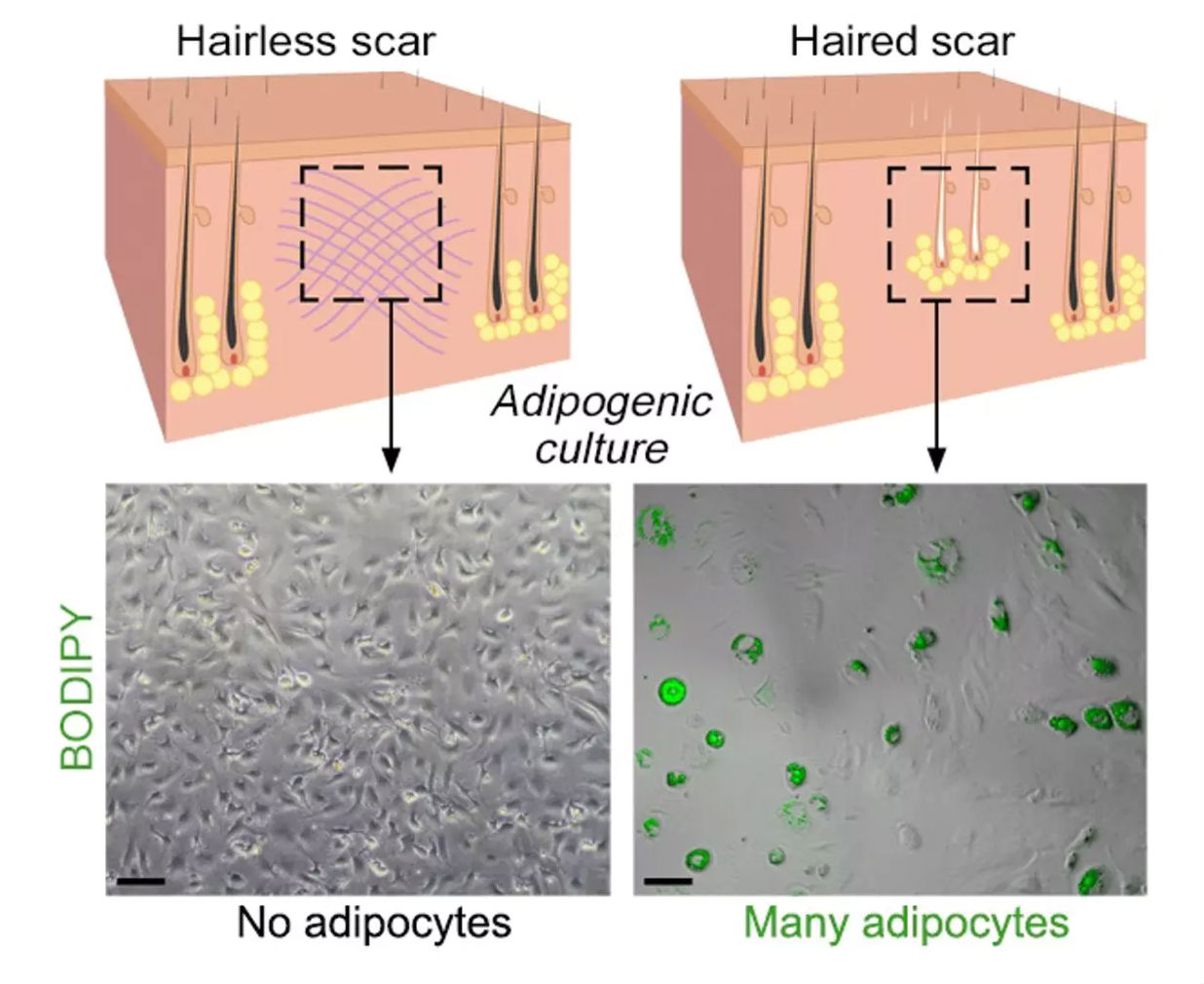 "Typically, myofibroblasts were thought to be incapable of becoming a different type of cell," says Cotsarelis.

"But our work shows we have the ability to influence these cells, and that they can be efficiently and stably converted into adipocytes."

It's important to remember that the experiment is just a proof of concept at this stage - it's been shown to work in mice and human skin samples, but it's a very different thing to achieve hair follicle growth in a wound that's attached to a living human being.

But it's a big deal, because until recently, scientists thought that converting myofibroblasts into adipocytes was biologically impossible in mammals.

If the team can somehow replicate the results in a human trial - by figuring out how to manipulate the Bone Morphogenetic Protein in scar tissue, for example - it could lead to entirely new ways of wound healing that would be indistinguishable from naturally regenerated skin.

Considering we've only just figured out why our skin doesn't leak, despite the fact that we're shedding roughly 500 million cells every 24 hours, there's a whole lot we still have to learn about the human body's largest organ.

Let's hope that some of that knowledge will lead to treatments in the future that can help wounds heal without scarring - because seriously, the pain is bad enough.