It's been over a year since the Hayabusa2 probe delivered its precious cargo of dust from an alien space rock, and we're finally getting a more detailed glimpse of what makes up asteroid Ryugu.

In two papers published today, international teams of scientists have revealed that, in accordance with analyses conducted by the probe while at the asteroid, Ryugu is very dark, very porous, and some of the most primitive Solar System material we've ever had access to here on Earth.

Although not unexpected, the results are very cool. Since the asteroid has remained more or less unchanged since the formation of the Solar System 4.5 billion years ago, the sample is one of our best tools yet for understanding the composition of the dust from which the inner Solar System objects coalesced.

"The Hayabusa2 returned samples … appear to be among the most primordial materials available in our laboratories," wrote one of the teams in their paper. "The samples constitute a uniquely precious collection, which may contribute to revisiting the paradigms of Solar System origin and evolution."

Asteroid Ryugu, formerly known as 1999 JU3, is only the second asteroid from which a sample return mission has been conducted. The first was Itokawa, whose sample return mechanism failed, resulting in only a minute amount of dust finally reaching Earth in 2010.

Ryugu is about a kilometer (0.62 miles) across, with a ridge around its equator; it travels an elliptical orbit that carries it just inside Earth's orbital path around the Sun, then out almost as far as Mars's orbit. The mission to get to the asteroid, touch down on it twice, then return any dust retrieved to Earth took a deeply impressive level of skill and planning.

But it worked, and 5.4 grams of precious asteroid dust were returned and duly analyzed, while Hayabusa2 sailed off for a series of rendezvous with other asteroids over the coming years. 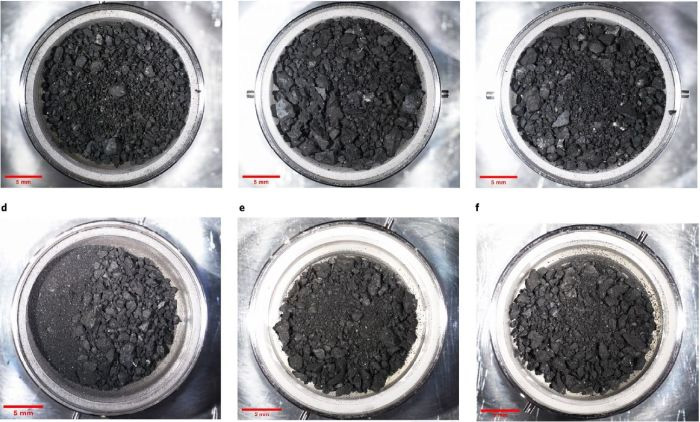 Based on remote sensing and on-asteroid measurements, we already know Ryugu is what we call a C-type asteroid, the most common type of asteroid in the Solar System. These rocks are rich in carbon, which makes them very dark; they also have lots of volatile elements.

In the first paper, led by astronomer Toru Yada of the Japan Aerospace Exploration Agency (JAXA), an analysis of a Ryugu sample reveals that the asteroid is extremely dark. Typically, C-type asteroids have an albedo (that's the measure of how much solar radiation a body reflects) of 0.03 to 0.09. Asphalt has an albedo of 0.04. Ryugu's albedo is 0.02. That means it reflects just 2 percent of the solar radiation that hits it.

The asteroid is also, the researchers determined, extremely porous. According to their measurements, Ryugu has a porosity of 46 percent. That's more porous than any carbonaceous meteorite we've ever had the opportunity to study, although we have seen more porous asteroids. This is consistent with the asteroid's porosity as measured by remote thermal imaging, and measurements conducted on the asteroid itself.

In the second paper, a team led by astronomer Cédric Pilorget of the Université Paris-Saclay in France analyzed the composition of the dust. They detected that the asteroid seems to consist of an extremely dark matrix, possibly dominated by phyllosilicates, or clay-like minerals, although there was a lack of a clear hydration signature.

In this matrix, they identified inclusions of other minerals, such as carbonates, iron, and volatile compounds.

Both of these papers agree that, in porosity and composition, Ryugu seems most similar to a type of meteorite classed as "CI chondrites". That means the meteorite is carbonaceous, and similar to the Ivuna meteorite. These meteorites have, compared to other meteorites, a composition very similar to that of the solar photosphere, suggesting they are the most primitive of all known space rocks.

More in-depth analyses will no doubt be on the way to try to discover more – not just about Ryugu, but what our Solar System was like as it was forming from the Sun's leftover dust.

"Our initial observations in the laboratory for the entire set of returned samples demonstrate that Hayabusa2 retrieved a representative and unprocessed (albeit slightly fragmented) sample from Ryugu," Yada's team wrote in their paper.

"Our data support and extend remote-sensing observations that suggested that Ryugu is dominated by hydrous carbonaceous chondrite-like materials, similar to CI chondrites, but with a darker, more porous and more fragile nature. This inference should be further corroborated by in-depth investigations hereafter by state-of-the-art analytical methods with higher resolution and precision."

The two papers have been published in Nature Astronomy. They can be found here and here.