Scientists have been struggling for decades to free diabetics from regular insulin injections. One of the main goals has been to figure out how to transplant healthy beta cells - the insulin-producing cells that fail as a result of diabetes - into patients, but this is an invasive procedure in itself that comes with the risk of rejection.

Now researchers have come up with a simpler option - they've created a synthetic patch that's covered in natural beta cells, which can be stuck painlessly to a patient's skin to secrete insulin when it's required and safely control blood sugar levels, no injection or monitoring required.

The patch hasn't been tested on humans as yet, but it's already been shown to safely control the blood sugar levels of mice for at least 10 hours at a time, and the concept is an upgrade of the 'smart insulin patch' that was reported last year by the same team.

The main difference is while the previous patch contained synthetic insulin, the new patch contains real, live beta cells, which means it's able to more safely manage a patient's blood sugar levels for longer, without the risk of over- or under-doing it.

And because the beta cells are kept on a patch safely outside of the patient's body, there's no chance of them being rejected by the immune system.

"This study provides a potential solution for the tough problem of rejection, which has long plagued studies on pancreatic cell transplants for diabetes," said lead researcher Zhen Gu from the University of North Carolina. "Plus it demonstrates that we can build a bridge between the physiological signals within the body and these therapeutic cells outside the body to keep glucose levels under control."

Beta cells are usually found in the pancreas, where they release insulin to help the body process excess sugar in the bloodstream following a meal. In people with diabetes, the cells are either damaged, or aren't able to produce enough insulin to keep blood sugar levels under control, which is why regular insulin injections are required.

The new patch works by linking microneedles up to live, cultured beta cells. If that doesn't sound too fun, don't worry, the needles are each roughly the size of an eyelash, which the scientists say means they don't hurt when they're applied.

Those microneedles poke into capillaries and provide a link between the beta cells and a patient's blood stream, and the team has developed something called 'glucose-signal amplifiers', which respond to rising blood sugar levels and communicate that message instantly back to the beta cells. 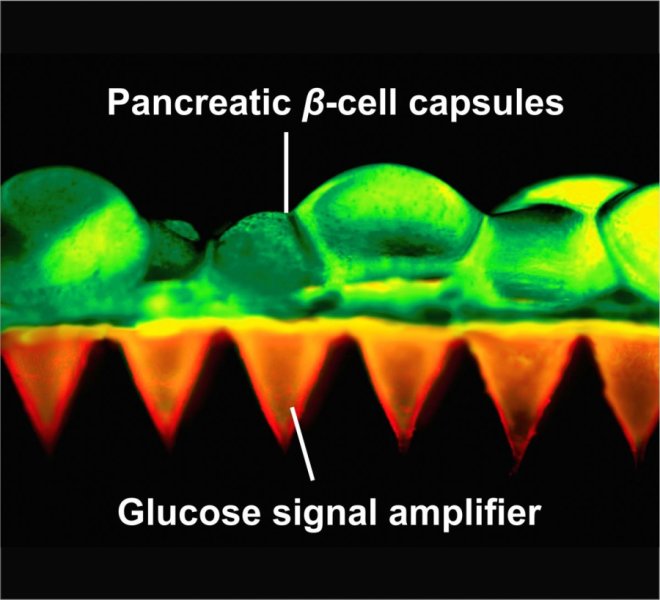 The patch has now been tested on mice with type-1 diabetes, and the researchers have shown that it can quickly respond to skyrocketing blood sugar levels, and keep them controlled for 10 hours at a time, without any monitoring or regulation.

Not only is this a whole lot quicker and easier than regular insulin injections, it's also safer, because diabetics can often give themselves too little or too much insulin, which can lead to complications such as hypoglycaemia, blindness, comas, and even death.

To make sure that there was no risk of this happening with the patch, the researchers added a second patch onto mice that had already had their blood sugar levels regulated. As they'd hoped, the new patch didn't produce any extra insulin, but it did extend the life of the treatment to 20 hours.

Before you get too excited, there's still a long way to go before the device can hit the market. First, they patches need to be tweaked further to get the best performance in animal models, and will then need to enter pre-clinical tests, and eventually clinical trials in humans.

But all the evidence so far suggests that they might just work as an easy and safe way for diabetics to control their condition. And that's something we really need.

"Managing diabetes is tough for patients because they have to think about it 24 hours a day, seven days a week, for the rest of their lives," said one of the researchers, John Buse. "These smart insulin approaches are exciting because they hold the promise of giving patients some time off with regards to their diabetes self-care. It would not be a cure but a desperately needed vacation."

The results have been published in Advanced Materials.